Lara Croft is this generation's John Rambo. "Shoot me," screams Ana, "and my men will cut you down in seconds. 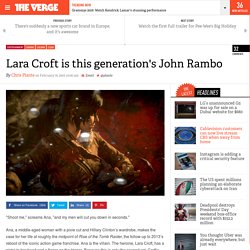 " Ana, a middle-aged woman with a pixie cut and Hillary Clinton’s wardrobe, makes the case for her life at roughly the midpoint of Rise of the Tomb Raider, the follow-up to 2013’s reboot of the iconic action game franchise. Ana is the villain. The heroine, Lara Croft, has a pistol to her head and a finger on the trigger. Because this is only the second act, Croft’s upper hand is undercut by Ana’s soldiers and their heavy weapons. Ana doesn’t beg; she threatens. Destiny's animators studied boxing to keep you from getting sick. David Helsby, senior animator at Bungie, shared for the first time publicly some of the secrets behind the first-person animations in Destiny. 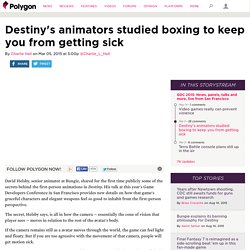 His talk at this year's Game Developers Conference in San Francisco provides new details on how that game's graceful characters and elegant weapons feel so good to inhabit from the first-person perspective. The secret, Helsby says, is all in how the camera — essentially the cone of vision that player sees — moves in relation to the rest of the avatar's body. If the camera remains still as a avatar moves through the world, the game can feel light and floaty.

But if you are too agressive with the movement of that camera, people will get motion sick. Tony Hawk got bad when it got big. The first Tony Hawk's Pro Skater game had nine levels with five objectives per level. 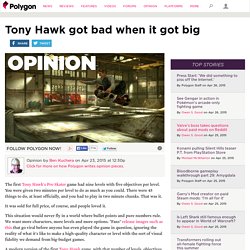 You were given two minutes per level to do as much as you could. There were 45 things to do, at least officially, and you had to play in two minute chunks. That was it. How to create a game in the middle of a civil war (and why I hate Oldsmobile) Long ago, in a far distant galaxy called Ukraine, three guys retired to make The Game. 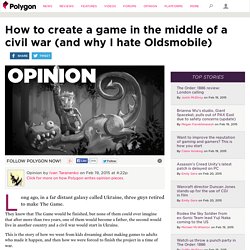 They knew that The Game would be finished, but none of them could ever imagine that after more than two years, one of them would become a father, the second would live in another country and a civil war would start in Ukraine. Want to make toxic League of Legends players more pleasant? Limit their chat. Riot Games is committed to making League of Legends as pleasant for new and struggling players as it possibly can, and it's not exactly an altruistic goal: The more people sign up and play, the more people there are to buy content and expand the success of what is arguably the most popular game in the world. 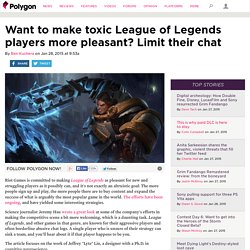 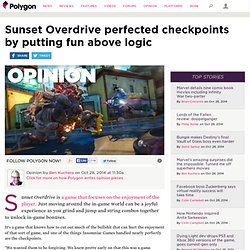 Just moving around the in-game world can be a joyful experience as you grind and jump and string combos together to unlock in-game bonuses. It’s a game that knows how to cut out much of the bullshit that can hurt the enjoyment of that sort of game, and one of the things Insomniac Games handled nearly perfectly are the checkpoints. "We wanted them to be forgiving. We knew pretty early on that this was a game centered around fun," Drew Murray, Insomniac’s game director, told Polygon. "And frankly, replaying the same thing over and over tends to not be that much fun. " Checkpoints can be very hard to do well, and the technical challenges of enjoyable checkpoints are many. 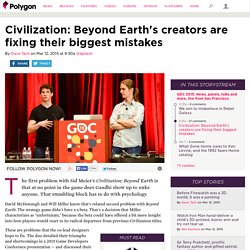 That stumbling block has to do with psychology. David McDonough and Will Miller know that's related second problem with Beyond Earth: The strategy game didn't have a a beta. That's a decision that Miller characterizes as "unfortunate," because the beta could have offered a bit more insight into how players would react to its radical departure from previous Civilization titles. This War of Mine and the puzzle of remorse. This War of Mine was one of the most significant games of last year, mostly because it made players feel really bad about themselves. 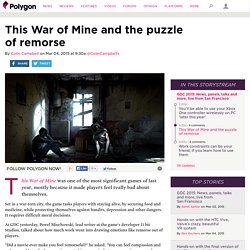 Set in a war-torn city, the game tasks players with staying alive, by securing food and medicine, while protecting themselves against bandits, depression and other dangers. It requires difficult moral decisions. At GDC yesterday, Pawel Miechowski, lead writer at the game's developer 11 bit Studios, talked about how much work went into drawing emotions like remorse out of players. "Did a movie ever make you feel remorseful? " he asked. They wanted to make a phenomenon. They made $10 million. The story of Crossy Road. Indie games often aspire to be different, and Crossy Road did, too. 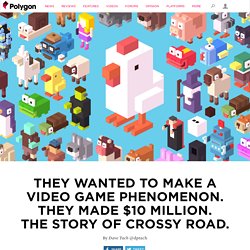 Hall and Sum wanted to create a free-to-play game that would sell well at first and then drift away. To do that, Hall figured, it needed two things. First, Crossy Road needed "retention," which just means the game gave players several reasons to enjoy and play the game as long as possible. Free-to-play games tend to be good at that, offering incentives that reward players to come back. In lieu of a traditional narrative ending, for example, free-to-play games have a solid gameplay loop. A defense of Binding of Isaac from a former fundamentalist Christian. Why does The Binding of Isaac need a "defense? 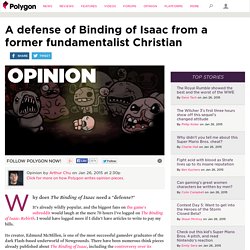 " It’s already wildly popular, and the biggest fans on the game's subreddit would laugh at the mere 70 hours I’ve logged on The Binding of Isaac: Rebirth. I would have logged more if I didn’t have articles to write to pay my bills. Its creator, Edmund McMillen, is one of the most successful gamedev graduates of the dark Flash-based underworld of Newgrounds. There have been numerous think pieces already published about The Binding of Isaac, including the controversy over its religious content and including people desperately trying to make sense of its surreal backstory and ending. Don't read the comments, or: How we went insane but made our game better.

"Don't read the comments, man. " The first time I heard that was from Rasmus Wedin at Boston Airport when we were preparing ourselves to get back to Valencia, Spain, after PAX East. We were reading what the press said about Gods Will Be Watching and found some unpleasant commenters on an article. It's one of the wisest pieces of advice I ever got in gamedev, and heard it again and again after that day. There's even a Twitter account that reminds you periodically to not read the comments.

What BioShock's creator learned from Shadow of Mordor. Monolith Production's Middle-earth: Shadow of Mordor tells a story "that could never exist in another medium" and, more importantly, has a lot to teach, according to a recent post from BioShock creator and Irrational Games co-founder Ken Levine. Shadow of Mordor allows players to pursue enemies and narrative threads as they wish with its Nemesis system. New enemies spring forth as you defeat the old ones, and they'll remember you from previous battles. It's a constantly evolving system that creates a different story each time. Although Shadow of Mordor includes its own traditional story, Levine writes, that tale "pales in comparison" to what players themselves can create with that system.

God is real, and it wants us dead: The religious terror of BioWare's biggest games. Games are often better at conveying horror than most other mediums, due to our direct and real-time responses. This year, we've experienced the constant dread of Alien: Isolation and the grotesque physicality of The Evil Within. Overlooked, however, is the cosmic horror in BioWare games. "We impose order on the chaos of organic life. You exist because we allow it, and you will end because we demand it. " These are the words of Sovereign, the first Reaper you encounter in Mass Effect. The entire Mass Effect trilogy is preparing for war against beings who are more powerful than anything in existence because they, essentially, created existence.

Why Beyond Earth can't top Alpha Centauri. One of the most common criticisms levelled at Firaxis’ Civilization: Beyond Earth is that it fails to live up to the narrative grandeur of its spiritual-predecessor, Sid Meier’s Alpha Centauri; but why? Simple nostalgia? Certainly the grass is greener in the 1990s for many gamers, but I would argue there’s more to this discontent, something which goes to the heart of good game design.

Narrative feels even more pretextual for your average 4X strategy title than it does for most games, where it’s a threadbare excuse upon which to hang the actual gameplay. But the best strategy games go farther, using what critic Rowan Kaiser calls "transparent mechanics" — mechanics that work to express a game’s core ideas, imbuing gameplay with meaning. Alpha Centauri’s strength can be found in its use of aptly placed flavor text, fully voice acted in many cases, to give events in the game — such as researching a technology or building a city improvement — added significance. Ten Years of World of Warcraft. Ten years of World of Warcraft. Well. So many thoughts.

WoW has always been a contradiction of sorts: not the pioneer, but the one that solidified the pattern. Not the experimenter, but the one that reaped the rewards. Call of Duty: Press X to feel something. I have never been to a military funeral. Call of Duty's single-player campaigns are selfish, decadent, and way too much fun. Hotline Miami 2: Wrong Number – 'We're going to do things … differently' You enter a building, you kill everyone inside, you leave, you get pizza.

Nintendo nostalgia gets creepy in this text adventure. Everyone had that one friend during their childhood. Alien: Isolation is a stunningly realistic locker simulator · Game Review. Jeux d'horreur. NaissanceE. A tale of two translations in Mars: War Logs. It was the prison rape scene that made the two men giggle. Black market Pokemon, hacking Dittos, and one man's quest for the perfect landshark. The theism of Goat Simulator: the surprising metaphysics of the year's goofiest game. Loot caves are a lie: Why Destiny's item system isn't as broken as you think. How The Swapper created horror out of clay and found objects. Rami Ismail's Blog - Why Hotline Miami is an important game. Kissing vs. killing: How Shadow of Mordor fails at explaining the difference.