China: Why digital marketing is changing along with a millennial middle class. Since the time of David Ogilvy, our job has been to make people want things and it’s time we redirect our energies to that purpose because advertising is getting harder due to the appearance of a new middle class, the Y-generation, or millennials, in China and the rest of the world. 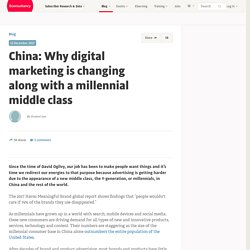 The 2017 Havas Meaningful Brand global report shows findings that “people wouldn't care if 74% of the brands they use disappeared.” As millennials have grown up in a world with search, mobile devices and social media, these new consumers are driving demand for all types of new and innovative products, services, technology and content. Their numbers are staggering as the size of the millennial consumer base in China alone outnumbers the entire population of the United States. After decades of brand and product advertising, most brands and products have little mystery or appeal to consumers, especially the Y-generation or millennials.

Brand reality Advertising reality Merging expertise. The news should be read by more regional and working class accents - Radio Times. British television executives may think there is a rich spread of voices on the small screen, but in fact the extraordinarily varied historic dialects of our language are effectively censored. 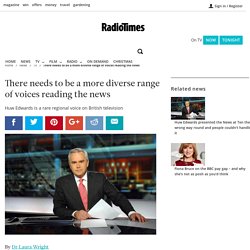 The few times you do hear them it’s for light entertainment – usually poking fun. The only exception is when a disaster occurs and news reporters seeks bystanders to react – then we do get to hear how the people of Britain really speak countrywide. Why? The answer is obvious: our great national taboo, social class. The working-class voice is excluded from British television. Welsh, Scottish and Irish accents score a little higher in people’s preferences, which is why you’ll hear newscasters with middle-class varieties of those accents (but using Standard English, never regional, grammar). Kieran: 'white middle class men should talk about diversity' Sophie Willan: who are you calling a northern working-class comic? It’s great to have Sophie Willan’s working-class voice in the comedy industry. 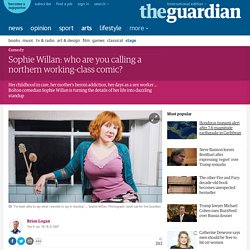 That’s not (just) me talking, that’s how “loads of people” have greeted the Lancastrian since her standup debut in 2016. “Some people are quite up for being pigeonholed like that,” says Willan. “But I think nuance is important.” Royal photo mum: It's changed our lives. Prince Harry learns to fist bump. The Critical Media Project. Have you ever wondered…whether your zip code, the car you drive, the technology you own, the kind of vacations you take, even the kind of food you eat are ways people see, identify and judge you? 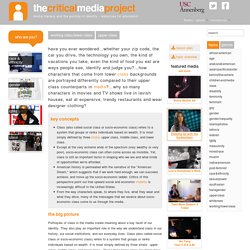 …how characters that come from lower class backgrounds are portrayed differently compared to their upper class counterparts in media? …why so many characters in movies and TV shows live in lavish houses, eat at expensive, trendy restaurants and wear designer clothing? Key concepts. ‘Identity, Neoliberalism and Aspiration: Educating white working-class boys’, by Garth Stahl (Eliot 2001) Garth Stahl (Eliot 2001), a Lecturer in Literacy and Sociology at the University of South Australia, has recently published a new book, titled Identity, Neoliberalism and Aspiration: Educating white working-class boys, which will be of interest to individuals in the field of sociology of education, and those from related disciplines studying class and gender. 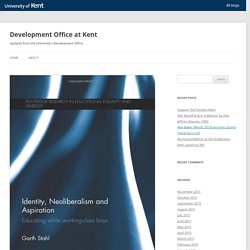 A theorist of sociology of education, Garth’s research interests lie in the nexus of neoliberalism and socio-cultural studies of education, identity, equity/inequality and social change. He attended the University of Kent in 2001-2002 on his junior year abroad from Indiana University, where he studied for a degree in Second Education and English. During his time at Kent, he undertook volunteer work with at-risk students. The work inspired him to return to the UK to work professionally. His first employment was teaching at a failing school in Essex with a low level of teaching and learning (the school subsequently closed). Wife Swap UK (2003) - Lizzie and Emma [Full Episode]

Watch this episode of Wife Swap. How are the different families portrayed in this video? Does this support or undermine the other research of the media representations of the working and middle classes? – sjbpsych

Homework article - read through this article and follow the instructions on the lesson PowerPoint. – sjbpsych 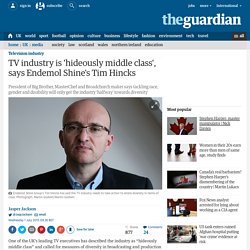 Tim Hincks, president of Endemol Shine Group – which produces shows including Big Brother, MasterChef, Broadchurch and Humans – said that tackling issues such as race, gender and disability would only get the industry “halfway” to creating a truly diverse workforce. “If Greg Dyke was able to say that the BBC was hideously white, it’s not overstretching it to say this industry is currently hideously middle class, and that’s an issue,” Hincks said in his Bafta TV lecture on Tuesday.