Intelligence: What are the most productive ways to spend time on internet 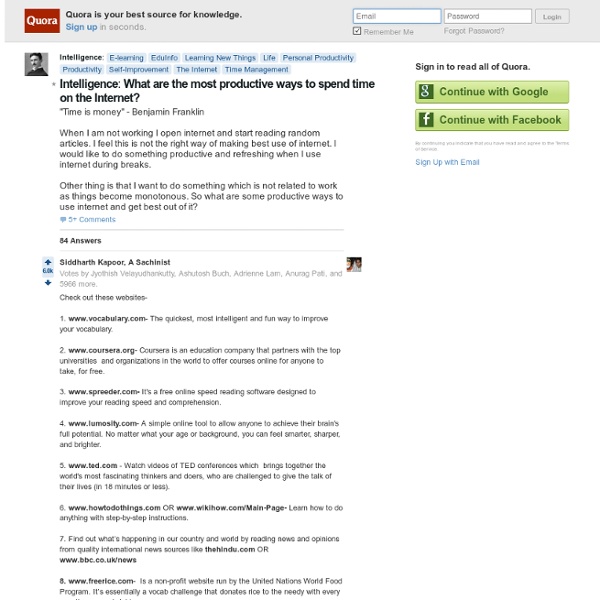 1. Openculture.com - This is the big daddy of internet when it comes to knowledge and learning new things. The best free cultural & educational media on the web 2. Instructables.com - Instructables is a huge community of do-it-yourselfers who actively engage in creating and sharing well-illustrated, step-by-step how-to articles on everything from building robots to repairing torn clothing to creating 3D anamorphic sidewalk art (really). 3. 30-Second MBA - Watch 30 second videos and get tips from business leaders. 4. creative-writing-now.com - Learn how to write stories, poems, novels with the free online writing courses. 5. 6. 7. 8. 9. 10 Academicearth.org - A comprehensive collection of free online courses from the world's top universities. 11. 12 13. 14. 15. 16. startups—FIVE THOT discover ideas, people, views, lifestyles and business - For those who lean on their right brain. 17. 19.

My Big Fat Indian Bachelorhood I hereby take this opportunity to declare myself an expert on weddings, seeing as how I’ve attended three in the last month, which involved about forty minutes of standing in line to congratulate rictus-stricken statues of what used to be my friends, followed by nine hundred hours in line at the buffet like refugees, clamouring for a plate of Jain-pizza-schezwan-dosa-pasta-souffle, and finally, having to think of 83957 silly responses when asked, “Beta, why aren’t you married yet?” (Current response: Because Gotham needs me.) Having said that, I don’t really mind weddings, as long as they’re not mine. But now, my parents are hoping to change that. I don’t know how it happened. They were fine a few days ago, until they summoned me into their room, sat me down and said simply, “We need to talk.”

What investors need to know about Facebook’s slowing growth Today Inside Facebook posted a brief article about the slowing growth of Facebook. Surely most companies could only dream of having the nearly 700 million users it currently has, and any extra is a bonus. However, with valuations of up to US$70 billion, Facebook has high expectations to live up to. Top 10 Websites to Learn Coding (Interactively) Online Gone are the days when programming languages could only be mastered programmers like Bill Gates, who later got to dominate the world by storm. Now everyone holds the same potential, and the chance to learn and even master programming language easily. Today, we will show you 10 interactive websites that will help you do that. That’s right, forget about complicated setups and black, cold command prompts that make you want to quit before you start, and say hi to 10 educational websites with instant and interactive lessons that teach you programming languages like HTML, CSS, PHP, Ruby and even iOS. Pick up tips, screencasts and even best practices from industry professionals.

Build Your Own Brain Gym: 100 Tools, Exercises, and Games Posted by Site Administrator in Health Tools May 28th, 2009 By Meredith Walker Stay on top of your game mentally and slow the effects of aging on your brain by keeping it in excellent shape. It’s easy to do and costs little to no money with all the resources available on the Internet.