13 Landmarks That Have Banned Selfies - Photos. The story of Narcissus and Echo. Interactive Literature Selections Echo and Narcissus. Liriope the river nymph gave birth to a beautiful child. 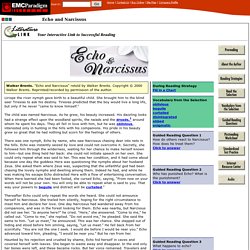 She brought him to the blind seer Tiresias to ask his destiny. Tiresias predicted that the boy would live a long life, but only if he never “came to know himself.” Thereafter Echo could only repeat the words she heard. She could not announce herself to Narcissus. She trailed him silently, hoping for the right circumstance to meet him and declare her love. Before the Camera Phone: Selfies Throughout History. A few weeks ago, the Oxford Dictionaries named "selfie" the Word of the Year for 2013. 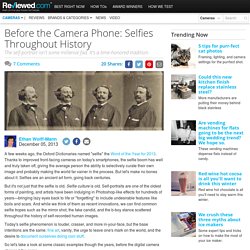 Thanks to improved front-facing cameras on today's smartphones, the selfie boom has well and truly taken off, giving the average person the ability to selectively curate their own image and probably making the world far vainer in the process. But let's make no bones about it: Selfies are an ancient art form, going back centuries. But it's not just that the selfie is old. Selfie culture is old. Self-portraits are one of the oldest forms of painting, and artists have been indulging in Photoshop-like effects for hundreds of years—bringing lazy eyes back to life or "forgetting" to include undesirable features like boils and scars. White House considering ban on selfies with the President. Thanks to David Ortiz, the White House says it may be time to strike out the selfie. 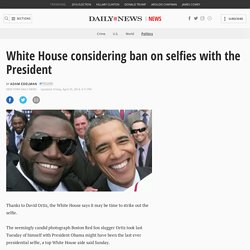 The seemingly candid photograph Boston Red Sox slugger Ortiz took last Tuesday of himself with President Obama might have been the last ever presidential selfie, a top White House aide said Sunday. Ortiz took the selfie with Obama Tuesday during the team’s visit to the White House. The pic appeared spontaneous, but then it was revealed Big Papi has a deal with the Samsung Galaxy Note 3 phone to perform public relations stunts like the Obama photo op. “Maybe this will be the end of all selfies,” White House Senior Adviser Dan Pfeiffer said about the incident Sunday on CBS’ “Face the Nation.”

“(Obama) obviously didn’t know anything about Samsung’s connection to this.” Snow White and the Huntsman Trailer 2012 - Official. President Obama, a Selfie Stick, and HealthCare.gov. #NoSelfies: 9 Places Where Selfies are Banned. The ongoing trend of taking selfies shows no sign of slowing down and it appears that the longer the trend goes on, the more outrageous the selfies become. 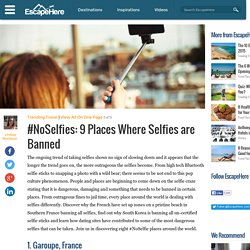 From high tech Bluetooth selfie sticks to snapping a photo with a wild bear; there seems to be not end to this pop culture phenomenon. People and places are beginning to come down on the selfie craze stating that it is dangerous, damaging and something that needs to be banned in certain places. From outrageous fines to jail time, every place around the world is dealing with selfies differently. Discover why the French have set up zones on a pristine beach in Southern France banning all selfies, find out why South Korea is banning all un-certified selfie sticks and learn how dating sites have contributed to some of the most dangerous selfies that can be taken. Join us in discovering eight #NoSelfie places around the world. 1. 2. 13 Landmarks That Have Banned Selfies - Photos. Robert Cornelius’ Self-Portrait: The First Ever “Selfie” (1839)

In this section of the site we bring you curated collections of images, books, audio and film, shining a light on curiosities and wonders from a wide range of online archives. 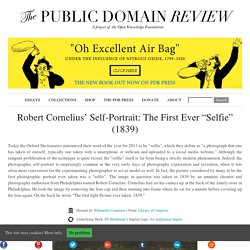 With a leaning toward the surprising, the strange, and the beautiful, we hope to provide an ever-growing cabinet of curiosities for the digital age, a kind of hyperlinked Wunderkammer – an archive of materials which truly celebrates the breadth and variety of our shared cultural commons and the minds that have made it. Some of our most popular posts include visions of the future from late 19th century France, a dictionary of Victorian slang and a film showing the very talented “hand-farting” farmer of Michigan. With each post including links back to the original source we encourage you to explore these wonderful online sources for yourself. Check out our Sources page to see where we find the content. What’s the Difference between a Selfie and a Self-Portrait? Hanging out with The Getty’s new acquisition @thegetty #museumselfie #manet #TheGetty #museum pic.twitter.com/4g9gSrnHra— Kate (@MissKateSwan) January 21, 2015 A selfie is a self-portrait taken with a smartphone. 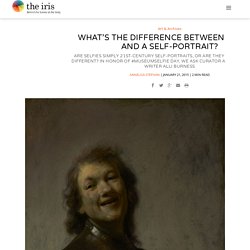 At least, that’s what I assumed until two weeks ago when I stumbled on an article in The Guardian about the Getty exhibition In Focus: Play. “You do see self-portraits,” curator Arpad Kovacs said of the show, “but they are self-portraits rather than selfies.” Instantly curious, I asked him to elaborate on the difference (emphasis mine): The self-portrait and the selfie are two separate, though at times overlapping, efforts at establishing and embellishing a definition of one’s self.

Qualities like medium specificity, deeply rooted histories, and traditions (or lack thereof) that define these efforts only superficially differentiate the two. The self-portrait, whether it is a carefully composed study or created in haste, often contains more decisions than could be easily erased. 10 Fun Facts About Selfies - 107.9 The Link. Selfies - The Do's and Don'ts of the Selfie.