15 Plants and Herbs That Can Boost Lung Health, Heal Respiratory Infections And Even Repair Pulmonary Damage. John Summerly, Prevent DiseaseWaking Times A wave of viral and bacterial infections is sweeping across the Northern Hemisphere and people are taking longer to heal from an array of symptoms within the respiratory system. 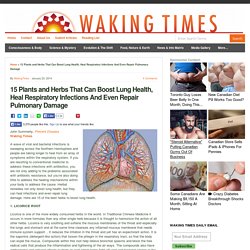 If you are resorting to conventional medicine to address these infections with antibiotics, you are not only adding to the problems associated with antibiotic resistance, but you’re also doing little to address the healing mechanisms within your body to address the cause. Herbal remedies not only boost lung health, but they can heal infections and even repair lung damage. Here are 15 of the best herbs to boost lung health. Licorice is one of the more widely consumed herbs in the world. Coltsfoot has been traditionally by Native Americans for thousands of years to strengthen the lungs. The toxic breakdown of therapeutic compounds in cannabis from burning the plant are totally avoided with vaporization. Thyme is very powerful in the fight against chest congestion. Cancer breakthrough: Grape seed extract kills colorectal cancer cells. The Watchers By Adonai – Posted on February 7, 2013 Cancer researchers are working to find chemotherapies that destroy cancer cells but are harmless to normal cells. 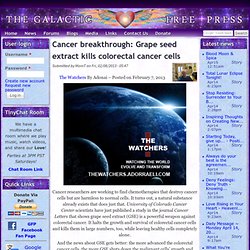 It turns out, a natural substance already exists that does just that. Ginger Root Kills Ovarian & Prostate Cancer Cells Better than Chemo. Christina Sarich, Staff WriterWaking Times Thanks to research from the University of Michigan and nearly three centuries of medicinal use, we can now utilize ginger root to not only kill ovarian cancer cells, but also prostate cancer cells with zero toxicity. 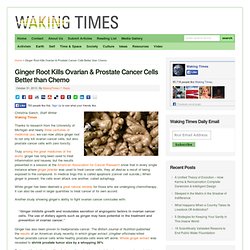 Truly among the great medicines of the world, ginger has long been used to treat inflammation and nausea, but the results presented in a session at the American Association for Cancer Research show that in every single instance where ginger powder was used to treat cancer cells, they all died as a result of being exposed to the compound. In medical lingo this is called apoptosis (cancer cell suicide.) When ginger is present, the cells even attack one another, called autophagy. While ginger has been deemed a great natural remedy for those who are undergoing chemotherapy, it can also be used in larger quantities to treat cancer of its own accord. 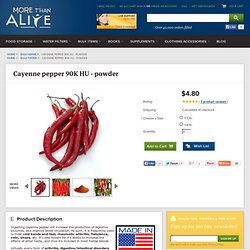 As such, it is frequently used to treat cold hands and feet, rheumatic arthritis, flatulence, colic, ulcers, etc. It's also known for it's ability to increase the effects of other herbs, and thus it's included in most herbal blends. Soursop Fruit 100 Fold Stronger At Killing Cancer Than Chemotherapy. Celery and Artichokes Contain Powerful Flavonoids That Kill Cancer Cells. Paul Fassa – What if I told you carrots cure cancer? – 30 September 2013. Cancer Paul Stamets: Mushroom Science and NO Trace of Cancer. Home | About Us | Contact | Subscribe Paul Stamets: Mushroom Science and NO Trace of Cancer CordycepsBenefitsOrg Turkey Tail Mushrooms Cure Non-HormoneResponsive Breast Cancer ForbiddenKnowledgeTV.cim Alexandra Bruce August 25, 2014 Renowned Mycologist, Paul Stamets, tells the story of his 84 year old mother who called him, to let him know that she had what turned out to be a 5.5 cm breast cancer tumor. 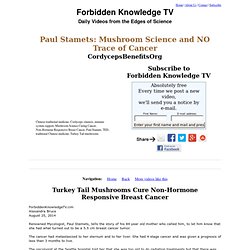 The cancer had metastasized to her sternum and to her liver. The oncologist at the Seattle hospital told her that she was too old to do radiation treatments but that there was an experimental study being done with Turkey Tail mushrooms (Cordyceps sinensis), in conjunction with chemotherapy, as this mushroom, long used in Chinese traditional medicine has clinically been shown to boost immune function, overall but also in patients undergoing chemotherapy. This Unusual Tropical Fruit Can Stop Cancer and Increase Life Span. Mae Chan, Prevent DiseaseWaking Times Sapodilla or sapota (chikoo) is a popular delicious tropical fruit in line with mango and kiwi. 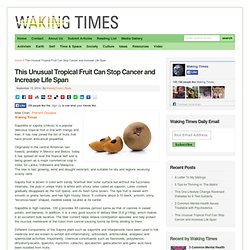 It has now joined the list of fruits that have proven anticancer properties. Originated in the central American rain forests, probably in Mexico and Belize, today it has spread all over the tropical belt and is being grown as a major commercial crop in India, Sri Lanka, Indonesia and Malaysia. The tree is fast growing, wind and drought resistant, and suitable for dry arid regions receiving scanty rains. Sapota fruit is brown in color with sandy “kiwifruit like” outer surface but without the fuzziness. Gerson Therapy - A Proven Cancer Treatment. Waking Times Documentary Film: This interview explains what the Gerson therapy is all about and how it can help you improve the immune system and fight cancer. 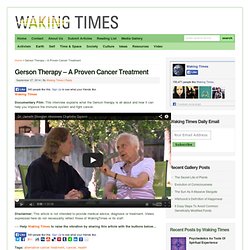 Disclaimer: This article is not intended to provide medical advice, diagnosis or treatment. Views expressed here do not necessarily reflect those of WakingTimes or its staff. ~~ Help Waking Times to raise the vibration by sharing this article with the buttons below… Large Scale Study Shows Nuts Decrease Cancer Risk By More Than One-Third. Karen Foster, Prevent DiseaseWaking Times Writing in Nature’s British Journal of Cancer, the team behind the new analysis reported that consumption of nuts – including tree nuts such as almonds, Brazil nuts, cashews, hazelnuts, macadamias, pecans, pine nuts, pistachios and walnuts – was found to be inversely associated with risk of pancreatic cancer, independent of other potential risk factors for pancreatic cancer. 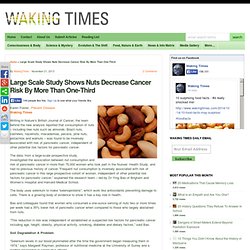 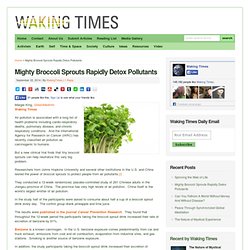 And the International Agency for Research on Cancer (IARC) has recently classified air pollution as carcinogenic to humans. But a new clinical trial finds that tiny broccoli sprouts can help neutralize this very big problem. Researchers from Johns Hopkins University and several other institutions in the U.S. and China tested the power of broccoli sprouts to protect people from air pollutants. [i] They conducted a 12-week randomized, placebo-controlled study of 291 Chinese adults in the Jiangsu province of China. In the study half of the participants were asked to consume about half a cup of a broccoli sprout drink every day. Isogaisa Siida AS. Er det moralsk forkastelig å "støvsuge" skogen for chaga? 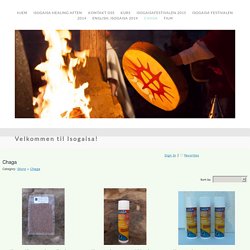 The Benefits of Beet Juice for Superhealthy Blood. Cancer-Killing Superfoods [infographic] (CC) Fried Dough/Flickr We’ve heard a lot of talk about ‘superfoods’ and their many health benefits, including boosts in the metabolic and immune systems. One benefit of superfoods that isn’t talked about as often is their cancer-fighting qualities. The below infograhic looks at how eating these superfoods can help fight off cancer and which foods help prevention. Superfoods help the body’s defenses by giving support to the liver and the immune system; they even help balance your hormones. The Pomegranate: Nature’s Power Fruit? 10 Functional Foods Which Destroy Cancer Cells. Dave Mihalovic, Prevent DiseaseWaking Times Many specific proteins, enzymes and coding within our immune system may be activated to kill cancer cells.

There is no such thing as a cancer cell that cannot be defeated by the human immune system. The difference between cancers that grow and those that don’t are what we put in our bodies to prohibit their growth. Proteins can be rendered ineffective if cells experience uncontrolled growth though damage or mutations to DNA or if toxins through food and chemical pollution override the immune system’s natural function. Here are 10 functional foods which suppresses tumour development during immune surveillance in the human body. Parsley Compound kills 86% of Lung Cancer Cells. By PAUL FASSA Worldwide, lung cancer is a devastating and exceedingly common form of cancer. It ranks as the number one cause of cancer deaths for adults in the United States. She Drank Carrot Juice Every Day For 8 Months: You Won’t Believe What Happened To Her! Carrot juice on wooden background Ann Cameron wants you to know about the power of carrots from her personal story with their amazing effect on her stage 4 cancer diagnosis.

On Tuesday July 30th, 2013 she had CT scan that found malignant tumors in her lungs, however, on Thursday August 1st 2013, she was told that there was no evidence of cancer. Carrot juice, and lots of it! Cameron juiced 5 lbs of carrots every day and cites she “had no chemo, no radiation, no other treatments, and no dietary changes beyond the carrot consumption, and continuing eating meat and ice cream and indulging in other dietary vices (I don’t recommend ice cream for cancer, but only want to emphasize that drinking carrot juice was the only change I made in my life, besides gratefully accepting prayers and “good energy” from friends and asking for wisdom and help from Whoever is up there in the Beyond.” References: Photo Credit: Depositphotos.com/annamoskvina Source. Grape seed extract more effective than chemotherapy in advanced cancer.

For patients facing a diagnosis of life-threatening cancer, the recommended cure can often be as potentially harmful to health as the disease itself. Florida woman heals her brain tumors by making healthier changes in diet. When Bonnie Lovett had a brain tumor the size of a grapefruit removed, she was thankful that she was able to regain the motor skills she had been losing. Can you avoid cancer by drinking traditional kefir (science says yes) A sizable segment of the Caucasian population living throughout North America seems to have lost an important piece of its cultural food heritage during the progressive settlement of the New World.

But traditional kefir, a cultured milk beverage believed to have originated on the northern slopes of the Caucasus Mountains more than 1,000 years ago, remains one of the most powerful healing foods in existence — and though it seems to have gone out of style for a while, kefir is making a remarkable comeback in the modern age. Olive Oil Compound ‘Kills Cancer Cells in 30 Minutes’ It’s the kind of discovery that should be making international headlines: a team of researchers has discovered that a simple compound in olive oil is capable of killing cancer cells ‘within 30 minutes to an hour’ — and it doesn’t harm healthy cells. And before some of you consider this to be ‘phony science,’ you should checkout the actual study published by the the School of Environmental and Biological Sciences at Rutgers in the journal Molecular and Cellular Oncology. Even the researchers and scientists behind the study are impressed and blown away by the results, which has serious implications when it comes to how the public may soon view simple nutrition as a weapon against cancer.

The compound utilized, known as oleocanthal, has previously been identified as an ‘anti-cancer’ agent, but the true extent of its ability to fight carcinogenic cells was virtually unknown. Amazing Medicinal Plant Kills Malignant Tumors and Destroys 70 Percent of Breast Cancer Cells. Dr. Marianna Pochelli, Prevent DiseaseWaking Times Beyond limited empirical observations, not all medicinal plants have established scientific studies to support their effectiveness. Garlic Kills Brain Cancer Cells Without Side Effects : Waking Times.

This Ancient Remedy “Cures All Diseases” HIV, AIDS, Diabetes, Cancer, Stroke, STDs, Arthritis & More … Black Cumin Seed Oil is the most important oil: It treats more than 80 serious diseases. Black cumin seed oil is perhaps the most important oil you can use for your health. Native to Western Asia, Turkey, Iraq, and Egypt, black seed oil has been valued for it’s health benefits for centuries. Scientists Discover Coconut Oil Exterminates 93 Percent Of Colon Cancer Cells In Two Days. Compound in Parsley Among ‘Most Potent Anti-Cancer Compounds’