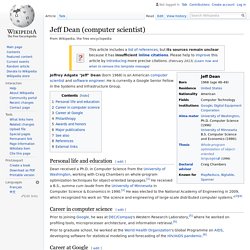 He is currently a Google Senior Fellow in the Systems and Infrastructure Group. Dean joined Google in mid-1999, and is currently a Google Senior Fellow in the Systems Infrastructure Group. While at Google, he has designed and implemented large portions of the company's advertising, crawling, indexing and query serving systems, along with various pieces of the distributed computing infrastructure that sits underneath most of Google's products. At various times, he has also worked on improving search quality, statistical machine translation, and various internal software development tools and has had significant involvement in the engineering hiring process. Among others, the projects he's worked on include: 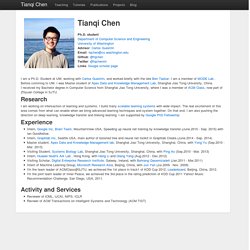 Student at UW, working with Carlos Guestrin, and worked briefly with the late Ben Taskar. I am a member of MODE Lab . Alexander J. Smola. Geoffrey Hinton - Wikipedia. Geoffrey Everest Hinton FRS[6] (born 6 December 1947) is a British-born Canadian[7] cognitive psychologist and computer scientist, most noted for his work on artificial neural networks. 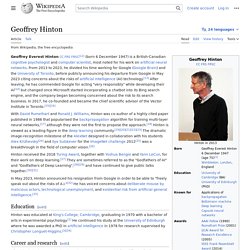 As of 2015[update] he divides his time working for Google and University of Toronto.[8] He was one of the first researchers who demonstrated the use of generalized backpropagation algorithm for training multi-layer neural nets and is an important figure in the deep learning community.[9][10][11] Education[edit] Hinton was educated at King's College, Cambridge graduating in 1970, with a Bachelor of Arts in experimental psychology.[1] He continued his study at the University of Edinburgh where he was awarded a PhD in artificial intelligence in 1977 for research supervised by H. 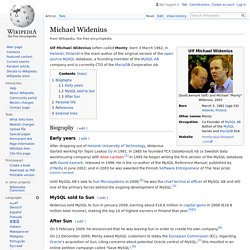 Biography[edit] Early years[edit] Stephen Wolfram. Stephen Wolfram (born 29 August 1959) is a British scientist,[7] known for his work in theoretical physics, as the chief designer of the Mathematica software application and the Wolfram Alpha answer engine, as well as the CEO of Wolfram Research, and the author of A New Kind of Science.[2][8][9][10][11][12][13] Background[edit] Wolfram's parents were Jewish refugees who emigrated from Germany to England in the 1930s.[5][14] Wolfram's father Hugo was a textile manufacturer and novelist (Into a Neutral Country) and his mother Sybil was a professor of philosophy at the University of Oxford.[15] He has a younger brother, Conrad Wolfram.[16] Wolfram is married to a mathematician and has four children.[17] Education[edit] Wolfram was educated at Eton College, but left prematurely in 1976. 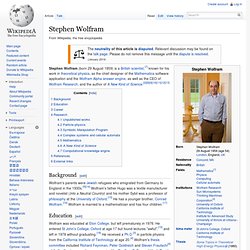 Ceph: get the best of your SSD with primary affinity - Sébastien Han. Matei Zaharia. Matei Zaharia is a Romanian-Canadian computer scientist specializing in big data, distributed systems, and cloud computing. 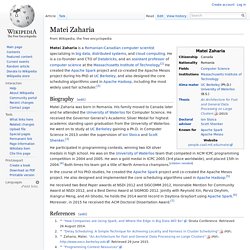 He is a co-founder and CTO of Databricks, and an assistant professor of computer science at the Massachusetts Institute of Technology.[1] He created the Apache Spark project and co-created the Apache Mesos project during his PhD at UC Berkeley, and also designed the core scheduling algorithms used in Apache Hadoop, including the most widely used fair scheduler.[2] Biography[edit] Matei Zaharia was born in Romania. His family moved to Canada later and he attended the University of Waterloo for Computer Science. He received the Governor General’s Academic Silver Medal for highest academic standing upon graduation from the University of Waterloo. 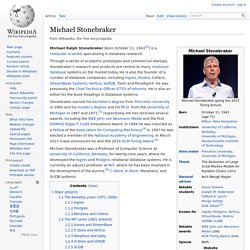 Stonebraker earned his bachelor's degree from Princeton University in 1965 and his master's degree and his Ph.D. from the University of Michigan in 1967 and 1971,[3] respectively. He has received several awards, including the IEEE John von Neumann Medal and the first SIGMOD Edgar F. Codd Innovations Award. In 1994 he was inducted as a Fellow of the Association for Computing Machinery.[4] In 1997 he was elected a member of the National Academy of Engineering. In March 2015 it was announced he won the 2014 ACM Turing Award.[5] Leslie Lamport. Leslie B. 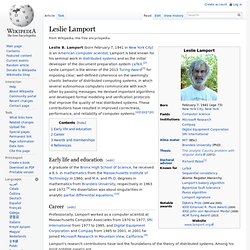 Lamport (born February 7, 1941 in New York City) is an American computer scientist. Lamport is best known for his seminal work in distributed systems and as the initial developer of the document preparation system LaTeX.[2] Leslie Lamport is the winner of the 2013 Turing Award[3] for imposing clear, well-defined coherence on the seemingly chaotic behavior of distributed computing systems, in which several autonomous computers communicate with each other by passing messages. He devised important algorithms and developed formal modeling and verification protocols that improve the quality of real distributed systems. 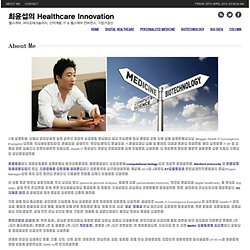 Alex Benik. Alex joined Battery in 2001 and currently works out of the firm’s Boston office. 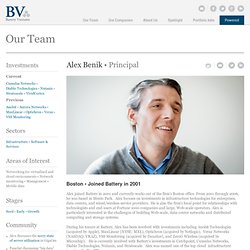 From 2001 through 2006, he was based in Menlo Park. Alex focuses on investments in infrastructure technologies for enterprises, data centers, and wired/wireless service providers. He is also the firm’s focal point for relationships with technologists and end users at Fortune 1000 companies and large, Web-scale operators. Our Latest Flash Memory Investment: The Devil Made Us Do It. Today we announced our investment in Ottawa-based Diablo Technologies, along with Hasso Plattner Ventures and existing investors Celtic House and The Business Development Bank of Canada. From what I can determine, Diablo’s $28m round is the largest investment in a Canadian technology start-up in over a decade.

And while that’s interesting, it doesn’t hold a candle to the technology and vision that warrants such a big bet. While Diablo isn’t announcing its products just yet, it has developed a revolutionary new approach to incorporating flash memory into computing systems. It’s called Memory Channel Storage (MCS) and we think it represents a dramatic shift in the storage/memory hierarchy. We are extremely excited to be working with this outstanding team and personally I am really looking forward to skating on the canal! Gary W. Keller. Gary Keller is an author of books on real estate investing, and the co-founder and chairman of the board of Keller Williams Realty, an Austin, Texas-based real estate franchising company.[1] Biography[edit]

올바로 나누어 : 34. 마지막 때의 징조들. 34. 마지막 때의 징조들 우리는 주님이 재림하시는 정확한 날짜를 알 수는 없으나 시대의 특징을 보고 그때가 가까왔음을 알 수 있다. George Orwell. Eric Arthur Blair (25 June 1903 – 21 January 1950),[1] known by his pen name George Orwell, was an English novelist, essayist, journalist and critic. His work is marked by lucid prose, awareness of social injustice, opposition to totalitarianism, and commitment to democratic socialism.[2][3] Commonly ranked as one of the most influential English writers of the 20th century and as one of the most important chroniclers of English culture of his generation,[4] Orwell wrote literary criticism, poetry, fiction and polemical journalism. He is best known for the dystopian novel Nineteen Eighty-Four (1949) and the allegorical novella Animal Farm (1945). His book Homage to Catalonia (1938), an account of his experiences in the Spanish Civil War, is widely acclaimed, as are his numerous essays on politics, literature, language, and culture.

In 2008, The Times ranked him second on a list of "The 50 greatest British writers since 1945".[5] Nineteen Eighty-Four. History and title[edit] A 1947 draft manuscript of the first page of Nineteen Eighty-Four, showing the editorial development. The Last Man in Europe was an early title for the novel but in a letter dated 22 October 1948 to his publisher Fredric Warburg, eight months before publication, Orwell wrote about hesitating between The Last Man in Europe and Nineteen Eighty-Four.[14] Warburg suggested changing the main title to a more commercial one.[15] Copyright status[edit] The novel will be in the public domain in the European Union and Russia in 2021 and in the United States in 2044.[21] It is already in the public domain in Canada;[22] South Africa,[23] Argentina[24] Australia,[25] and Oman.[26] Background[edit]

Big Brother (Nineteen Eighty-Four) In the society that Orwell describes, every citizen is under constant surveillance by the authorities, mainly by telescreens. The people are constantly reminded of this by the phrase "Big Brother is watching you", the maxim ubiquitous on display. Since the publication of Nineteen Eighty-Four, the term "Big Brother" has entered the lexicon as a synonym for abuse of government power, particularly in respect to civil liberties, often specifically related to mass surveillance.

ÀÌ´ÜºÐ·ù ÀÚ·á¸ðÀ½ ¾Æ·¡ÀÇ ÀÚ·á´Â ÇÑ±¹±âµ¶±³ÃÑ¿¬ÇÕÈ¸ ÀÌ´Ü»çÀÌºñ ´ëÃ¥À§¿øÈ¸ ¹èÆ÷ÀÚ·á¸¦ Áß½ÉÀ¸·Î ÀÛ¼ºÀÌ µÇ¾îÁø °ÍÀÔ´Ï´Ù. T. K. Seung. 미닉스의 작은 이야기들. Cloud, Open source, and Startup. Hannibal. Hannibal lived during a period of great tension in the Mediterranean, when the Roman Republic established its supremacy over other great powers such as Carthage, the Hellenistic kingdoms of Macedon, Syracuse, and the Seleucid empire. One of his most famous achievements was at the outbreak of the Second Punic War, when he marched an army, which included war elephants, from Iberia over the Pyrenees and the Alps into northern Italy. Perspectives.