Skylake (microarchitecture) An initial batch of Skylake CPUs (6600K and 6700K) was announced for immediate availability during the Gamescom on August 5, 2015,[1] unusually soon after Broadwell. 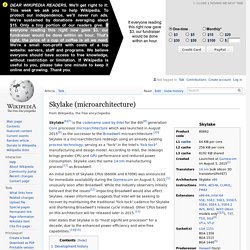 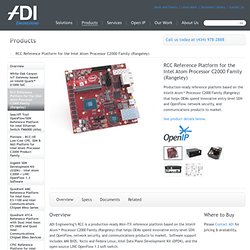 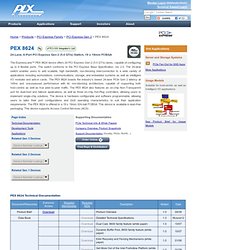 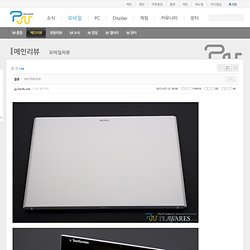 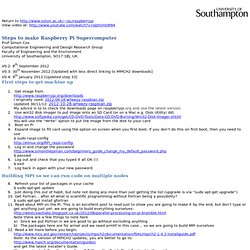 Downloads. Never Miss A Word. 네이버 블로그. Arduino. Arduino is an open-source computer hardware and software company, project and user community that designs and manufactures kits for building digital devices and interactive objects that can sense and control the physical world.[1] Arduino boards may be purchased preassembled, or as do-it-yourself kits; at the same time, the hardware design information is available for those who would like to assemble an Arduino from scratch. 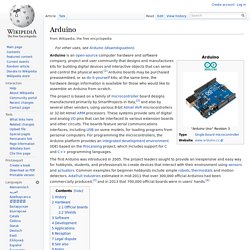 The first Arduino was introduced in 2005. The project leaders sought to provide an inexpensive and easy way for hobbyists, students, and professionals to create devices that interact with their environment using sensors and actuators. Common examples for beginner hobbyists include simple robots, thermostats and motion detectors. Arduino - HomePage. Smart Phone. LG Optimus Black. The LG P970 Optimus Black is a smartphone designed and manufactured by LG Electronics and was released in 2011. 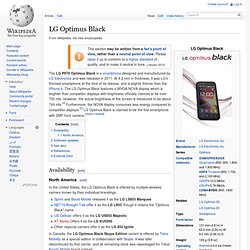 At 9.2 mm in thickness, it was LG's thinnest smartphone at the time of its release, and is slightly thinner than the iPhone 4. The LG Optimus Black features a WVGA NOVA display which is brighter than competitor displays with brightness officially claimed to be over 700 nits. However, the actual brightness of the screen is measured to be about 749 nits.[4] Furthermore, the NOVA display consumes less energy compared to competitor displays.[5] LG Optimus Black is claimed to be the first smartphone with 2MP front camera.

WLAN. Wi-Fi. Wi-Fi, also spelled Wifi or WiFi, is a technology that allows an electronic device to exchange data or connect to the internet wirelessly using 2.4 GHz UHF and 5 GHz SHF radio waves. 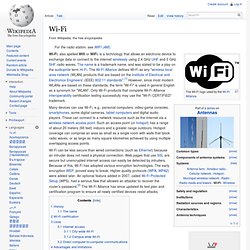 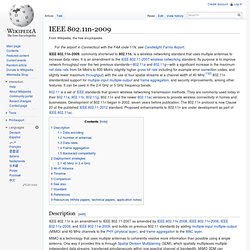 It is an amendment to the IEEE 802.11-2007 wireless networking standard. Its purpose is to improve network throughput over the two previous standards—802.11a and 802.11g—with a significant increase in the maximum net data rate from 54 Mbit/s to 600 Mbit/s (slightly higher gross bit rate including for example error-correction codes, and slightly lower maximum throughput) with the use of four spatial streams at a channel width of 40 MHz.[1][2] 802.11n standardized support for multiple-input multiple-output and frame aggregation, and security improvements, among other features. It can be used in the 2.4 GHz or 5 GHz frequency bands. 802.11 is a set of IEEE standards that govern wireless networking transmission methods. Description[edit] InfiniBand. InfiniBand is a switched fabric computer network communications link used in high-performance computing and enterprise data centers. 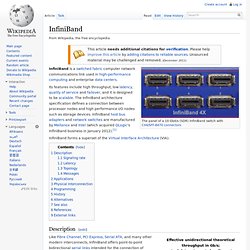 NVM is an acronym for non-volatile memory, as used in SSDs. A major application of NVMe is SATA Express, which is a new and backward-compatible interface specification supporting either SATA or PCI Express storage devices. SATA Express can use either legacy AHCI or new NVMe as the logical device interface.[1] Background[edit] Near field communication. A summary of near-field communication Near field communication (NFC) is a set of ideas and technology that enables smartphones and other devices to establish radio communication with each other by touching the devices together or bringing them into proximity to a distance of typically 10 cm (3.9 in) or less. Early business models such as advertising and industrial applications were not successful, having been overtaken by alternative technologies such as barcodes or UHF tags, but what distinguishes NFC is that devices are often cloud connected.

VMEbus. VME64 crate with, from left, an ADC module, a scaler module and a processor module History[edit] In 1979, during development of the Motorola 68000 CPU, one of their engineers, Jack Kister, decided to set about creating a standardized bus system for 68000-based systems. The Motorola team brainstormed for days to select the name VERSAbus. VERSAbus cards were large, 14.5" by 9.25", and used edge connectors.[1] Only a few products adopted it, including the IBM System 9000 instrument controller and the Automatix robot and machine vision systems. VERSAbus memory card. VME eXtensions for Instrumentation. The VXI bus architecture is an open standard platform for automated test based upon VMEbus.

VXI stands for VME eXtensions for Instrumentation, defining additional bus lines for timing and triggering as well as mechanical requirements and standard protocols for configuration, message-based communication, multi-chassis extension, and other features. In 2004, the 2eVME extension was added to the VXI bus specification, giving it a maximum data rate of 160 MB/s. The VXIbus grew from the VME bus specification, it was established in 1987 by Hewlett Packard (now Agilent Technologies), Racal Instruments (now EADS North America Test and Services), Colorado Data Systems, Wavetek and Tektronix. The VXIplug&play Alliance specified additional hardware and software interoperability standards, notably the Virtual Instrument Software Architecture or VISA, although the alliance was eventually merged with the IVI Foundation.