Fractal tree index - Wikipedia. In computer science, a Fractal Tree index is a tree data structure that keeps data sorted and allows searches and sequential access in the same time as a B-tree but with insertions and deletions that are asymptotically faster than a B-tree. 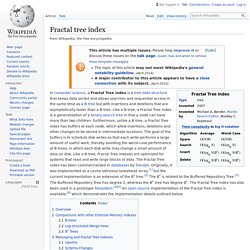 Like a B-tree, a Fractal Tree index is a generalization of a binary search tree in that a node can have more than two children. Furthermore, unlike a B-tree, a Fractal Tree index has buffers at each node, which allow insertions, deletions and other changes to be stored in intermediate locations. The goal of the buffers is to schedule disk writes so that each write performs a large amount of useful work, thereby avoiding the worst-case performance of B-trees, in which each disk write may change a small amount of data on disk. Like a B-tree, Fractal Tree indexes are optimized for systems that read and write large blocks of data. The Fractal Tree index has been commercialized in databases by Tokutek. Overview[edit] , is fetched. . . . . Bulk synchronous parallel - Wikipedia. The Bulk Synchronous Parallel (BSP) abstract computer is a bridging model for designing parallel algorithms. 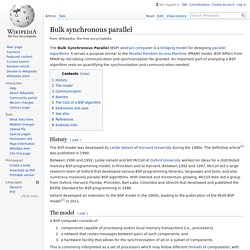 It serves a purpose similar to the Parallel Random Access Machine (PRAM) model. BSP differs from PRAM by not taking communication and synchronization for granted. An important part of analyzing a BSP algorithm rests on quantifying the synchronization and communication needed. History[edit] The BSP model was developed by Leslie Valiant of Harvard University during the 1980s. Between 1990 and 1992, Leslie Valiant and Bill McColl of Oxford University worked on ideas for a distributed memory BSP programming model, in Princeton and at Harvard.

Newton's method in optimization - Wikipedia. A comparison of gradient descent (green) and Newton's method (red) for minimizing a function (with small step sizes). 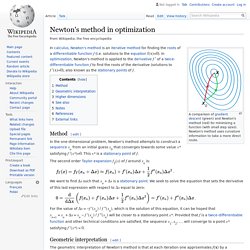 Newton's method uses curvature information to take a more direct route. In calculus, Newton's method is an iterative method for finding the roots of a differentiable function f (i.e. solutions to the equation f(x)=0). In optimization, Newton's method is applied to the derivative f ′ of a twice-differentiable function f to find the roots of the derivative (solutions to f ′(x)=0), also known as the stationary points of f. Distributed hash table. History[edit] These systems differed in how they located the data offered by their peers. Napster, the first large-scale P2P content delivery system, required a central index server: each node, upon joining, would send a list of locally held files to the server, which would perform searches and refer the queries to the nodes that held the results. This central component left the system vulnerable to attacks and lawsuits. Gnutella and similar networks moved to a flooding query model – in essence, each search would result in a message being broadcast to every other machine in the network. 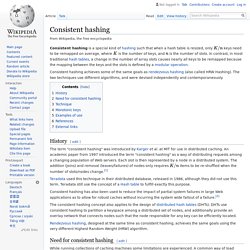 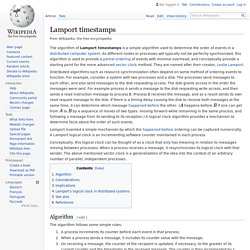 As different nodes or processes will typically not be perfectly synchronized, this algorithm is used to provide a partial ordering of events with minimal overhead, and conceptually provide a starting point for the more advanced vector clock method. They are named after their creator, Leslie Lamport. Distributed algorithms such as resource synchronization often depend on some method of ordering events to function. GNU Lesser General Public License - Wikipedia. The LGPL was developed as a compromise between the strong copyleft of the GNU General Public License (GPL) and more permissive licenses such as the BSD licenses and the MIT License. 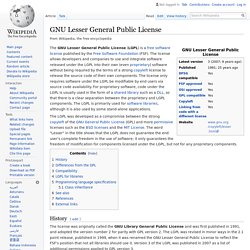 The word "Lesser" in the title shows that the LGPL does not guarantee the end user's complete freedom in the use of software; it only guarantees the freedom of modification for components licensed under the LGPL, but not for any proprietary components. Zipf's law. GridRPC. GridRPC is Remote Procedure Call over a grid. 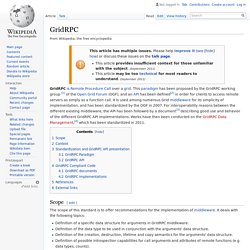 This paradigm has been proposed by the GridRPC working group [1] of the Open Grid Forum (OGF), and an API has been defined[2] in order for clients to access remote servers as simply as a function call. It is used among numerous Grid middleware for its simplicity of implementation, and has been standardized by the OGF in 2007. For interoperability reasons between the different existing middleware, the API has been followed by a document[3] describing good use and behavior of the different GridRPC API implementations.

Works have then been conducted on the GridRPC Data Management,[4] which has been standardized in 2011. Upstream (software development) The term also pertains to bugs; responsibility for a bug is said to lie upstream when it is not caused through the distribution's porting and integration efforts. 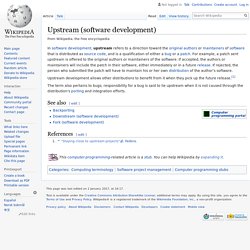 Skip list. In computer science, a skip list is a data structure that allows fast search within an ordered sequence of elements. 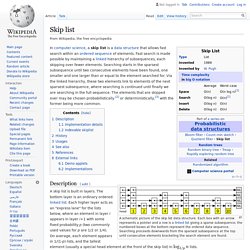 Fast search is made possible by maintaining a linked hierarchy of subsequences, each skipping over fewer elements. Searching starts in the sparsest subsequence until two consecutive elements have been found, one smaller and one larger than or equal to the element searched for. Via the linked hierarchy, these two elements link to elements of the next sparsest subsequence, where searching is continued until finally we are searching in the full sequence. The elements that are skipped over may be chosen probabilistically [2] or deterministically,[3] with the former being more common. Indexed Database API. The Indexed Database API, or IndexedDB (formerly WebSimpleDB), is a recommended[1] web browser standard interface for a local database of records holding simple values and hierarchical objects. 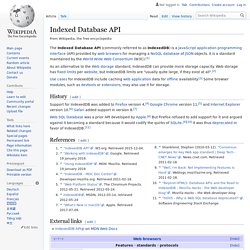 IndexedDB was initially proposed by Oracle in 2009.[2] IndexedDB could be used for browser implemented functions, such as bookmarks, as well as web applications, such as email. An open-source reference implementation of the Indexed Database API exists for testing and experimentation purposes.[3] Chord (peer-to-peer) In computing, Chord is a protocol and algorithm for a peer-to-peer distributed hash table.

A distributed hash table stores key-value pairs by assigning keys to different computers (known as "nodes"); a node will store the values for all the keys for which it is responsible. Chord specifies how keys are assigned to nodes, and how a node can discover the value for a given key by first locating the node responsible for that key. Nodes and keys are assigned an -bit identifier using consistent hashing. The SHA-1 algorithm is the base hashing function for consistent hashing.

Using the Chord lookup protocol, nodes and keys are arranged in an identifier circle that has at most nodes, ranging from to should be large enough to avoid collision.) Media-independent interface. Being media independent means that different types of PHY devices for connecting to different media (i.e. Twisted pair copper, fiber optic, etc.) can be used without redesigning or replacing the MAC hardware. The MII bus (standardized by IEEE 802.3u) connects different types of PHYs (physical transceivers) to media access controllers (MAC).

Thus any MAC may be used with any PHY, independent of the network signal transmission media. “Tape is Dead, Disk is Tape, Flash is Disk …” – Jim Gray. Storm (event processor) Apache Storm is a distributed computation framework written predominantly in the Clojure programming language. Originally created by Nathan Marz[1] and team at BackType,[2] the project was open sourced after being acquired by Twitter.[3] It uses custom created "spouts" and "bolts" to define information sources and manipulations to allow batch, distributed processing of streaming data. The initial release was on 17 September 2011.[4] A Storm application is designed as a "topology" in the shape of a directed acyclic graph (DAG) with spouts and bolts acting as the graph vertices. Edges on the graph are named streams and direct data from one node to another.

Together, the topology acts as a data transformation pipeline. HipHop Virtual Machine. HHVM is developed by Facebook, with the project's source code hosted on GitHub; it is licensed under the terms of the PHP License and Zend License.[1][5] Overview[edit] HHVM was created as the successor of the HipHop for PHP (HPHPc) PHP execution engine, which is a PHP-to-C++ transpiler that has also been created by Facebook.[8][9] Based on the gained experience and aiming to solve issues introduced by HPHPc, Facebook decided in early 2010 to create a JIT-based PHP virtual machine.[10] Issues associated with HPHPc included its reaching of a plateau for further performance improvements, lack of full support for all features of the PHP language, and difficulties arising from specific time- and resource-consuming development and deployment processes required for PHP projects that used HPHPc.[8] In Q1 2013, the production version of facebook.com website stopped using HPHPc and switched to HHVM.