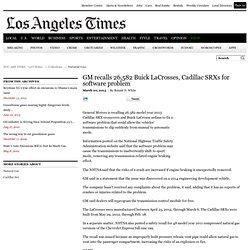 GM said in a statement that the issue was discovered on a 2014 engineering development vehicle. The company hasn't received any complaints about the problem, it said, adding that it has no reports of crashes or injuries related to the problem. GM said dealers will reprogram the transmission control module for free. The LaCrosses were manufactured between April 25, 2012, through March 6. First Times ride of Husqvarna's new street legal dirt bike. Twitter bans animated PNGs to protect epileptic users. Apple has a secret team working on satellites: Details here. Twitter CEO Jack Dorsey just unfollowed Mark Zuckerberg.

Redmi Note 8 Pro bricking for some people: Here's why. Day after Seelampur violence, Section 144 imposed in Northeast Delhi. Elephind.com: Search the world's historic newspaper archives. Realme X2, its truly-wireless earphones launched in India. This is Microsoft's fancy new Windows logo. An Upper Limit For Apps? New Data Suggests Consumers Only Use Around Two Dozen Apps Per Month. There are now well over a million mobile applications in both Google Play and the iTunes App Store alike, and growth of those app marketplaces shows no sign of slowing down. 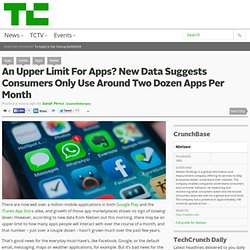 However, according to new data from Nielsen out this morning, there may be an upper limit to how many apps people will interact with over the course of a month, and that number – just over a couple dozen – hasn’t grown much over the past few years. That’s good news for the everyday must-have’s, like Facebook, Google, or the default email, messaging, maps or weather applications, for example.

But it’s bad news for the young companies trying to establish a foothold and core group of dedicated, engaged and loyal users within the ever-expanding app universe. According to Nielsen, U.S. iPhone and Android users over 18 have been increasing the time they spend using mobile applications, which is up 65% over just two years ago. In the last quarter of 2013, for example, users spent 30 hours, 15 minutes using apps per month.

Now, you can ask Google Assistant to be your interpreter. Facebook accused of running misleading ads about HIV prevention. Apple releases iOS 13.3 with parental controls: Details here. This app uses blockchain to help sexual assault victims. Data Mining: Using Predictive Analysis and Social Network Analysis. How Google uses 'ultrasonic sensing' to show appointments/reminders. Now, Google is adding instant chat into Photos. But, why? 1 out 3 women face harassment on call, says Truecaller. You can upgrade to Windows 10 for free: Here's how. The Brilliant Hack That Brought Foursquare Back From the Dead. 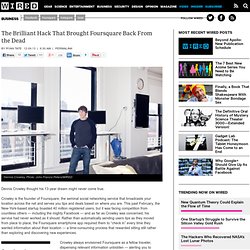 Photo: John Francis Peters/WIRED Dennis Crowley thought his 13-year dream might never come true. Crowley is the founder of Foursquare, the seminal social networking service that broadcasts your location across the net and serves you tips and deals based on where you are. This past February, the New-York-based startup boasted 40 million registered users, but it was facing competition from countless others — including the mighty Facebook — and as far as Crowley was concerned, his service had never worked as it should. Rather than automatically sending users tips as they moved from place to place, the Foursquare smartphone app required them to “check in” every time they wanted information about their location — a time-consuming process that rewarded sitting still rather than exploring and discovering new experiences.

The trouble is that, over the intervening years, other companies have begun to have the same dream as Crowley. Anoop Ranganath and Blake Shaw. Blake Shaw. From iPad to iPhone: Everything Apple will launch next year. Meet Roo, a chatbot to answer all your sex-related questions. Realme X2 Pro: Latest News, Timelines, Photos, Videos - NewsBytes. Apple AirPods Pro v/s Beats Powerbeats Pro: Which is better? Atlas Saint-Ouen.