Dwell - 10 Things You Didn’t Know About Charles and Ray Eames. And while their work in furniture, filmmaking and exhibition design is well-documented, there’s even more to their restless creativity than you might imagine. 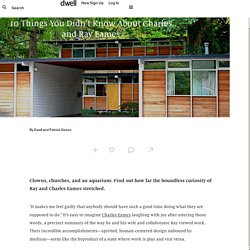 Dwell spoke with Daniel Ostroff, film producer, design historian, and editor of the forthcoming An Eames Anthology: Articles, Film Scripts, Interviews, Letters, Notes and Speeches by Charles and Ray Eames (Yale University Press), and Eames Demetrios, artist, principal of Eames Office, and grandson of the famous couple, to uncover underappreciated and relatively unknown stories about the design icons. 2) They Were Great Friends with Billy Wilder “Charles used to say they learned more about architecture from watching a Billy Wilder film than talking to most architects,” says Eames Demetrios. 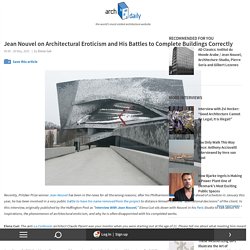 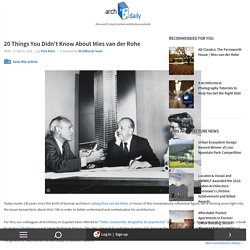 In honor of this tremendously influential figure, we're shining some light into the lesser known facts about Mies' life in order to better understand and contextualize his architecture. “We Just Loved Her”: Frank Gehry Reflects on 30 Years of Friendship With Zaha Hadid. If there is one architect who understands the challenges that Dame Zaha Hadid faced in the upper echelons of architectural stardom, it is surely Frank O. 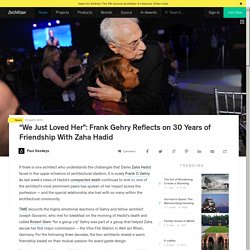 Gehry. As last week’s news of Hadid’s unexpected death continues to sink in, one of the architect’s most prominent peers has spoken of her impact across the profession — and the special relationship she had with so many within the architectural community. TIME recounts the highly emotional reactions of Gehry and fellow architect Joseph Giovanni, who met for breakfast on the morning of Hadid’s death and called Robert Stern “for a group cry.” Gehry was part of a group that helped Zaha secure her first major commission — the Vitra Fire Station in Weil am Rhein, Germany. For the following three decades, the two architects shared a warm friendship based on their mutual passion for avant-garde design. “The Mother Art is Architecture”: 10 Tenacious Quotes by Frank Lloyd Wright. Updated by Paul Keskeys, June 8th, 2016 Today marks the 119th anniversary of Frank Lloyd Wright’s birth, and with it comes an opportunity to reflect on the extraordinary impact of arguably America’s greatest architect. 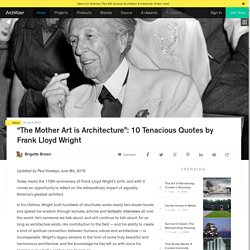 In his lifetime, Wright built hundreds of structures, wrote nearly two-dozen books and spread his wisdom through lectures, articles and fantastic interviews all over the world. He’s someone we talk about, and will continue to talk about, for as long as architecture exists. His contribution to the field — and his ability to create a kind of spiritual connection between humans, nature and architecture — is incomparable. Wright’s legacy remains in the form of some truly beautiful and harmonious architecture, and the knowledge he has left us with since his passing over a half a century ago lingers on. Inside tadao ando's self-built studio in osaka. Apr 08, 2016 inside tadao ando's self-built studio in osaka inside tadao ando’s self-built studio in osakaall images by kaita takemura self-taught architect tadao ando set up his own practice in 1969. since then, he has completed over 200 buildings and was awarded the pritzker architecture prize in 1995. on the occasion of its 5th anniversary, PORT magazine visited the architect’s studio in osaka, which was originally intended as a residence, and discusses the key principles that typify the 74-year-old’s acclaimed work. 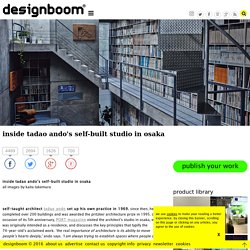 ‘the real importance of architecture is its ability to move people’s hearts deeply,’ ando says. Rare Footage of Le Corbusier Discussing his Work, Poetry & the “Ideal City” Top 100 Architecture Universities in the World (2015) This week, the QS World University Rankings has released the list of the top 100 universities for architecture & built environment. 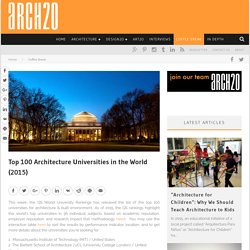 As of 2015, the QS rankings highlight the world’s top universities in 36 individual subjects, based on academic reputation, employer reputation and research impact (full methodology here). You may use the interactive table here to sort the results by performance indicator, location, and to get more details about the universities you’re looking for. Watch The Practice of Architecture: Visiting Peter Zumthor Online. The 10 Most Inspirational TED Talks for Architects.

The 10 Most Inspirational TED Talks for Architects Inspiration is a funny thing: when you need it is nowhere to be seen, and just when you're not expecting it, it can blindside you in the least convenient of places. 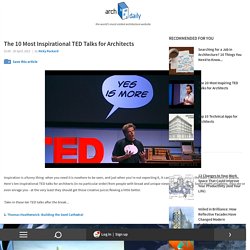 Here's ten inspirational TED talks for architects (in no particular order) from people with broad and unique views on architecture. Rem Koolhaas: "Architecture Has A Serious Problem Today" Rem Koolhaas, the Pritzker Prize-winning Dutch architect, theorist, and provocateur, spoke with Mohsen Mostafavi, dean of the Harvard Graduate School of Design, in the closing keynote for the 2016 AIA convention. 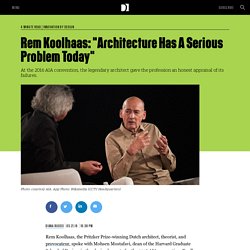 Koolhaas, who founded the acclaimed architecture firm OMA, candidly spoke about the profession's shortcomings, how it could adapt to the changing social and technical climates of today, and how its rare ability to do "ballet-like stretches" holds the key to the future. Here are the key highlights: Communication needs an overhaul. The story of 5 Archists : From Paintings to real Buildings. The story of 5 ‘ Archists ’ Let me define an ‘Archist’ to begin with. 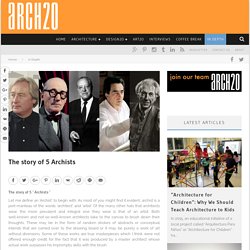 However, as Aravena explains about the talks, “we have organized them around themes, but architecture by nature always integrates more than one dimension. These Meetings will thus be a way to get from the authors themselves the richness and complexity of the built environment, and what it takes to get things done.” NEIGHBOURHOOD: Where Alvaro Meets Aldo / Inside Portugal's Pavilion at the 2016 Venice Biennale. As part of ArchDaily's coverage of the 2016 Venice Biennale, we are presenting a series of articles written by the curators of the exhibitions and installations on show. As a response to the 15th International Architecture Exhibition’s challenging theme, Portugal presents a “site-specific” pavilion, occupying an urban front in physical and social regeneration on the island of Giudecca: Campo di Marte.

In actual fact, the installation of the pavilion on-site triggered the completion of Campo di Marte’s urban project designed by the Portuguese architect Álvaro Siza thirty years ago. The pavilion exhibits four notable works by Siza, in the field of Social Housing - Campo di Marte (Venice); Schilderswijk (The Hague); Schlesisches Tor (Berlin); and Bairro da Bouça (Porto) - exposing his participatory experience as a peculiar understanding of the European city and citizenship.

Reflecting on a Master Architect: 10 Water-Centric Works by Tadao Ando. Tadao Ando’s work consists of more than just the tangible architectural materials making up each structure, masterfully utilizing reflection, simple palettes and negative space to incorporate wind, water and light into the carefully designed compositions. The self-taught yet Pritzker Prize-winning Japanese architect infuses these elements – most notably in the form of reflecting pools and ponds – into almost all of his creations, yet it always seems fresh, each structure standing firm in its own identity. Water Temple, Awaji, Japan, 1991. Key projects by Peter Zumthor. Here's a selection of projects by architect Peter Zumthor, who was named 2009 Pritzker Architecture Prize Laureate earlier this week (see our previous story). Update: this project is included in Dezeen Book of Ideas, which is on sale now for £12. Captions are from Peter Zumthor. Above photo by Walter Mair. Where It All Happens: Inside the Architecture Studios of Piano, Ando, Safdie and More.

We are profoundly influenced by the spaces we inhabit, and it is no surprise that architects, who design such spaces, are particular about the places they work. We pay a lot of attention to the architects themselves but rarely consider the very environments in which their work is born: the architecture studio. This collection takes a look at a diverse set of architecture studios. These are spaces of invention, idea-testing and collaboration. Each studio is different from the next and speaks volumes about the immense breadth of design methodology and the environments in which architects work. 50 Things You Didn't Know About Le Corbusier.

“Architecture Should Not Be the Protagonist of the Environment”: Architizer Interviews Kengo Kuma. REM: A Retroactive, Redacted Study of the World’s Greatest Living Architect.