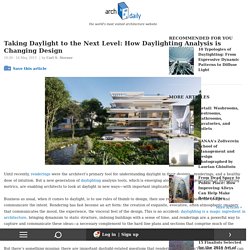 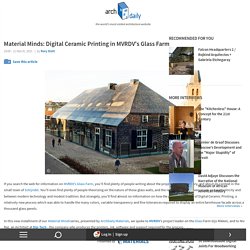 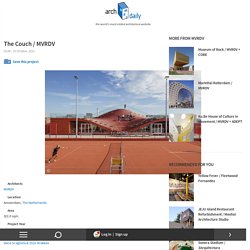 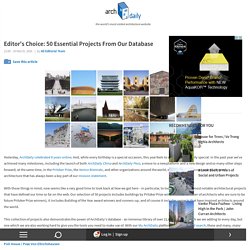 And, while every birthday is a special occasion, this year feels to us to be particularly special: in the past year we've achieved many milestones, including the launch of both ArchDaily China and ArchDaily Perú, a move to a new platform and a new design and so many other steps forward; at the same time, in the Pritzker Prize, the Venice Biennale, and other organizations around the world, we're seeing the acceptance of a type of architecture that has always been a key part of our mission statement. 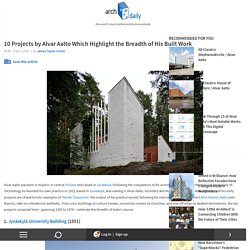 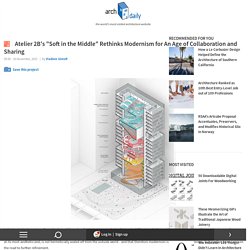 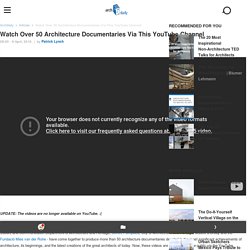 :(Over the past 20 years, many of the most renowned European cultural institutions - including ARTE France, Les Films d’Ici, the Louvre, the Ministry of Culture and Communication Department of Architecture and Heritage, Centre Pompidou, City of Architecture and Heritage, Musée d'Orsay and the Fundació Mies van der Rohe - have come together to produce more than 50 architecture documentaries devoted to the most significant achievements of architecture, its beginnings, and the latest creations of the great architects of today.

Now, these videos are accessible to the public via the YouTube Channel ACB (Art and Culture Bureau). The World’s 10 Coolest Car Parks. The World's 10 Coolest Car Parks Parking garages generally have a bad reputation - particularly now that cars are seen as such an environmentally unfriendly way to travel, not to mention the fact that they are often unattractive utilitarian structures. 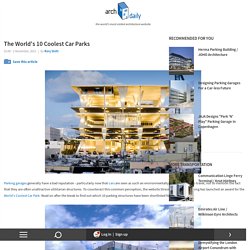 To counteract this common perception, the website Stress Free Airport Parking has launched an award for the World's Coolest Car Park. Read on after the break to find out which 10 parking structures have been shortlisted for the top award. Rem Koolhaas on Prada, Preservation, Art and Architecture. Rem Koolhaas on Prada, Preservation, Art and Architecture With the opening of the Fondazione Prada art galleries in May, OMA showed a different side to their practice, one focusing on preservation and assemblage rather than the iconography and diagrammatic layout that many associate with the firm. 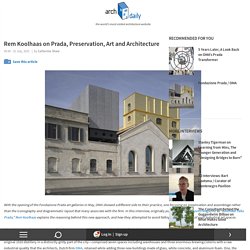 In this interview, originally published by Metropolis Magazine as "Koolhaas Talks Prada," Rem Koolhaas explains the reasoning behind this new approach, and how they attempted to avoid falling into the clichés of post-industrial art spaces. When the Fondazione Prada opened its doors to a new permanent home in Milan dedicated to contemporary culture, it not only placed the Italian city firmly at the forefront of today’s global art world, but also introduced an ambitious new way of thinking about the relationship between architecture and art.

“The Future of Shade” Competition Winners Announced. While humans have created shelter out of fabric for millennia, the material is uniquely associated with more recent innovation. 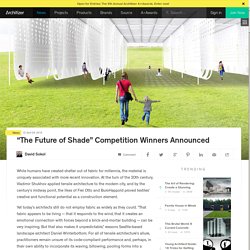 At the turn of the 20th century, Vladimir Shukhov applied tensile architecture to the modern city, and by the century’s midway point, the likes of Frei Otto and BuroHappold proved textiles’ creative and functional potential as a construction element. Yet today’s architects still do not employ fabric as widely as they could. “That fabric appears to be living — that it responds to the wind, that it creates an emotional connection with forces beyond a brick-and-mortar building — can be very inspiring. But that also makes it unpredictable,” reasons Seattle-based landscape architect Daniel Winterbottom.

Watch The Practice of Architecture: Visiting Peter Zumthor Online. 10 places to watch Architecture/Design Lectures Online. Watch Architecture/Design Lectures Online Searching online for inspirational lectures in one place is impossible. It is extremely hard to locate a good source website which has a series of lectures from renowned architects, designers, thinkers, scientists or philosophers. Hours are wasted just filtering through the search results.

And when you do find it, you are exhausted and want to procrastinate, exactly just what I ended up doing when I was assigned to make a list of the top 10 places to watch Architecture/Design Lecture videos. If you have missed a lecture at your university this could actually help you out. The 10 Most Inspirational TED Talks for Architects. The 10 Most Inspirational TED Talks for Architects Inspiration is a funny thing: when you need it is nowhere to be seen, and just when you're not expecting it, it can blindside you in the least convenient of places. Here's ten inspirational TED talks for architects (in no particular order) from people with broad and unique views on architecture. Some might enlighten, educate or even enrage you - at the very least they should get those creative juices flowing a little better. Take-in these ten TED talks after the break... 1.

There's usually an obvious answer to most problems, and then there's Thomas Heatherwick's solution. A Brief History Of Modern Architecture Through Movies. Students at UIC Barcelona Create 1:1 Plans of Famous Buildings. 9 Architects Reflect on the Homes That Most Inspired Them. Where do you receive inspiration? Nalina Moses asked the question to nine contemporary residential architects, asking each to choose one residence that had left an impression on them. The following answers were first published on the AIA’s website in the article “Homing Instinct. " When nine accomplished residential architects were asked to pick a house—any house—that has left the greatest impression on them as designers, most of their choices ran succinctly along the canon of American or European Modern architecture.

10 Extraordinary Urban Regenerative Strategies for Public Open Space. Article by Rosa di Gregorio Urban regeneration strategies are a very broad and complex topic with endless variations. Gallery: Herzog & de Meuron's Tate Modern Extension Photographed by Laurian Ghinitoiu. Unfinished. After the incredible drive witnessed at the end of the last century followed by a couple of decades of huge ferment, in 2008 Spain entered an overwhelming and paralysing slump that seriously affected its architectural world. The abrupt change in the status quo – from a total lack of resources to changing prospects while works were in progress and even a sudden collapse in the need for the works under construction – transformed extraordinary design opportunities into crippled and unexpressed projects placed on hold. Your Very Own Mobile ThinkTank — for the Road or the Office. Glass Farm. A Brutalist Paradise: Explore Ricardo Bofill’s Home and Workshop in a Transformed Cement Factory.