10+ Getting to Know You Activities for Teens & Adults. How To Create A Meme The Easy Way With Google+ Did you know that you could easily create a meme using Google+? 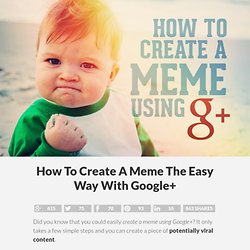 It only takes a few simple steps and you can create a piece of potentially viral content. First, let’s define what a meme is: meme /mēm/ Unifying Class Activities for Teens & Adults. Learning in an environment where students are familiar with their peers creates a body of knowledge advantageous to the whole class. 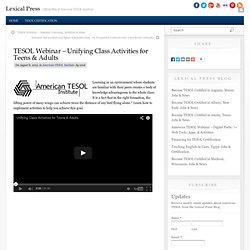 It is a fact that in the right formation, the lifting power of many wings can achieve twice the distance of any bird flying alone.* Learn how to implement activities to help you achieve this goal. Resources:VuvoxGlogsterMuzyWebdocZimmertwinsMixbookStripgeneratorGoogle StoriesMuseum of Me. Promoting Literacy for Teens on Mobile Devices. Teaching Grammar to Adults and Teens. Grammar is the whole system and structure of a language or of languages in general, usually taken as consisting of syntax and morphology. 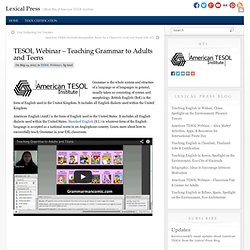 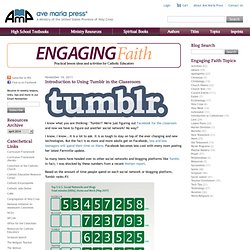 We're just figuring out Facebook for the classroom and now we have to figure out another social network? No way! " Follow, Heart, Reblog, Crush: Teaching Writing with Tumblr. Adriana Valdez Young By taking a quick glance at my member profile, you might guess that Tumblr is an online dating site, but although Tumblr frames site activity in the language of admiration and courtship, it is, in fact, a fantastically simple microblogging platform that is extremely adaptable for a spectrum of personal and professional uses. 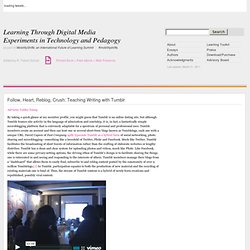 Tumblr members create an account and then can host one or several short-form blogs known as Tumblelogs, each one with a unique URL. David Capece of Fast Company aptly typecasts Tumblr as a hybrid form of social networking, photo sharing and microblogging—something like a lovechild of Twitter, Flickr and Facebook. Much like Twitter, Tumblr facilitates the broadcasting of short bursts of information rather than the crafting of elaborate websites or lengthy diatribes.

Game-based learning. Motivating Teens with Web 2.0 Tools. Apps. 10 Facts Every Parent Should Know about Their Teen's Brain. By Robin Nixon | April 22, 2011 11:05am ET Credit: nullThey are dramatic, irrational and scream for seemingly no reason. 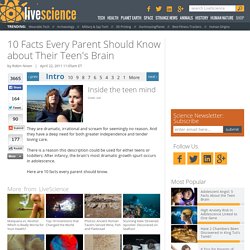 And they have a deep need for both greater independence and tender loving care. There is a reason this description could be used for either teens or toddlers: After infancy, the brain's most dramatic growth spurt occurs in adolescence. Here are 10 facts every parent should know. Author Bio. Statistics of Teens on Social Networks. Posted by Adrian at 4:06 pm More than 90 percent of teenagers have used a form of social media, and yet even this tech-savvy generation feels the need to disconnect at times. 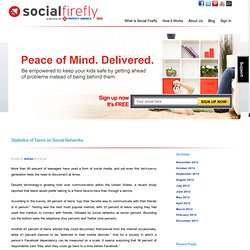 Despite technology’s growing hold over communication within the United States, a recent study reported that teens would prefer talking to a friend face-to-face than through a device. According to the survey, 49 percent of teens “say their favorite way to communicate with their friends is in person.” Critical Thinking On The Web. Top Ten Argument Mapping Tutorials. 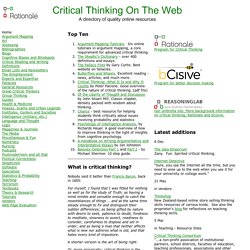 Six online tutorials in argument mapping, a core requirement for advanced critical thinking.The Skeptic's Dictionary - over 400 definitions and essays. The Fallacy Files by Gary Curtis. Turning Teenagers’ Peers Into A Positive Influence. Thursday, May 30, 2013 New research suggests that changes in way teenagers view risks and rewards when in the presence of their peers are not only a critical part of their development, but may also provide a key to motivating them, writes Sarah Sparks in Education Week. 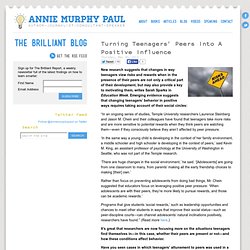 Emerging evidence suggests that changing teenagers’ behavior in positive ways requires taking account of their social circles: “In an ongoing series of studies, Temple University researchers Laurence Steinberg and Jason M. Much Ado about Nothing. Much Ado about Nothing Submitted by admin on 11 January, 2008 - 16:50 This lesson plan follows on from the article 'Shakespeare for Teens' and it is best exploited as a series of two or three lessons. 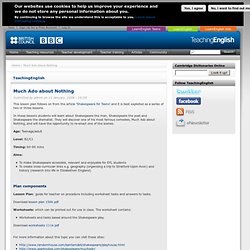 In these lessons students will learn about Shakespeare the man, Shakespeare the poet and Shakespeare the dramatist. They will discover one of his most famous comedies, Much Ado about Nothing, and will have the opportunity to re-enact one of the scenes. Age: Teenage/adult. Friendship 2.0: Technology May Help Teens Feel They Belong. By Janice Wood Associate News Editor Reviewed by John M. Grohol, Psy.D. on October 27, 2012 Worried that your teen is glued to her cell phone and constantly checking social networking sites? A new study suggests the use of digital media may actually help teens reach developmental milestones, such as fostering a sense of belonging and sharing problems. “What they’re doing is different from generations of teenagers from before the digital era, but it comes from the same place of basic developmental needs.

Last month, Common Sense Media released “Social Media, Social Life: How Teens View their Digital Lives” (pdf). The study tracks how teens view the role of social media, and their relationship to it. According to survey results, 90 percent of all American teens have used social media, 75 percent have their own social networking site, and nearly one in three teens visit these profiles multiple times a day. Researchers surveyed a diverse, probability-based sample of 1,030 teens ages 13–17 from across the U.S. to create a snapshot of the relationship today’s teens have with social media. More specifically, they strove to address five questions: The Most Popular Social Media Sites For Teens. In an age when many parents worry about their teens spending time on social networks, Peggy Hernandez said she trusts her 16-year-old daughter.

“When my daughter was 14, she started becoming more independent with social media,” the at-risk youth counselor from Sheridan, Colo., said. “It’s my privilege to look at her phone, but I’ve given her more privacy. That’s part of their identity nowadays. Social-Media-Teens.jpg (570×1764) Quandary. Beyond the Book Report: Ten Alternatives. In my last post I described 10 ways to cultivate a love of reading in kids.

I want to expand on that theme by suggesting 10 alternatives to the book report. I'm not a fan of book reports; I don't think they are an effective way for a student to demonstrate understanding of a book and I don't think they help students enjoy or appreciate reading. Let's consider some activities that allow a student to show understanding of a book and that might be enjoyable. Small Demons — Welcome to the Storyverse. Mpricemitchell.sharedby.co/share/8dZQk8. Stages of Teenage Development: Physical and Psychosocial Aspects.

Physical growth pattern during teenage Teenage development is a phase of rapid physical growth that is only second to the rate of growth seen during infancy. The rapid growth phase of teenage lasts for 4-5 years, when on an average: Girls gain 8.3 cm. per year and boys gain about 9.5 cm. per year. During 7 years of teenage development children gain half of the total expected gain in height required to achieve the adult height. One-third of total height gain is reached in the first 3 years of life. The 10 years between 3 and 13 years of age fall in the slow phase of child growth. Mastergardeners.nmsu.edu/pubs/_f/f-122.pdf. The Teen Brain. Understanding How Adolescents Think. Chat Text Apps. HOW TO: Create a Group Tumblr Blog. Can You Escape - Download and Play Free On iOS and Android. (30) Using a Facebook Group As a Learning Management System. Best iPhone Apps: 3 iPad Games to Keep a Teen's Attention Span! by elysa.