Book Award Winners. Book Awards 2017 Longlists. The UKLA Selection Panel, chaired by Lynda Graham, whittled down the 398 publisher submissions to arrive at a set of longlists, which excitingly feature books in translation, nonfiction titles, poetry and debut authors as well as established and familiar names in children’s literature. 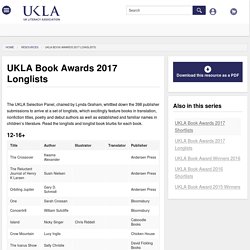 Read the longlists and longlist book blurbs for each book. More about the longlists - Longlist book blurbs by Jak Brien, UKLA Team Alison Hubble by Allan Ahlberg and Bruce Ingman Alison Hubble wakes up one morning to find there are two of her. Lollies home - Scholastic Shop. After months of deliberation by our esteemed judges, we’re delighted to announce the shortlist for the Laugh out Loud Awards 2017 (“the Lollies”)! 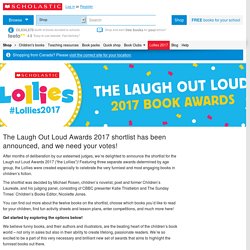 Featuring three separate awards determined by age group, the Lollies were created especially to celebrate the very funniest and most engaging books in children’s fiction. The shortlist was decided by Michael Rosen, children’s novelist, poet and former Children’s Laureate, and his judging panel, consisting of CBBC presenter Katie Thistleton and The Sunday Times’ Children’s Books Editor, Nicolette Jones. You can find out more about the twelve books on the shortlist, choose which books you’d like to read for your children, find fun activity sheets and lesson plans, enter competitions, and much more here! Get started by exploring the options below! 2016 category award winners. Wellcome Book Prize. Waterstones Children’s Book Prize shortlists offer 'optimism in uncertain times'

The 18-strong shortlists for the Waterstones Children’s Book Prize 2017 [see below for full listings] show a strong presence from independent Chicken House as well as publishers Hachette and Penguin Random House. 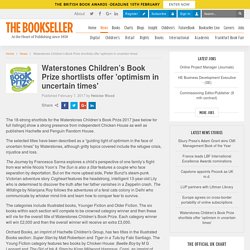 The selected titles have been described as a “guiding light of optimism in the face of uncertain times” by Waterstones, although gritty topics covered include the refugee crisis, injustice and loss. The Journey by Francesca Sanna explores a child’s perspective of one family’s flight from war while Nicola Yoon’s The Sun is also a Star features a couple who face separation by deportation. But on the more upbeat side, Peter Bunzl's steam-punk Victorian adventure story Cogheart features the headstrong, intelligent 13-year-old Lily who is determined to discover the truth after her father vanishes in a Zeppelin crash. Search results for "book award" Love from Boy: Roald Dahl's Letters to his Mother: Amazon.co.uk: Donald Sturrock: 9781444786279: Books.

Review Love From Boy, in all its cunning unreliability, becomes more fascinating the more you think about it. 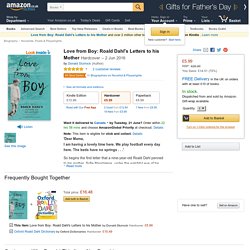 It is a work of showmanship, written for someone to whom the author would always be a child. As the backdrop to one of the world's greatest children's writers, it's so wonderfully complicated you'd have thought even Dahl couldn't have made it up. Except that he did (Daily Telegraph) Sturrock's carefully chosen letters, complemented by a judicious selection of biographical and photographic material, testify to a bond between mother and son that is unbreakable, even in the face of boarding school, war and sexual jokes about Hitler (The Times, Book of the Week) Sturrock is right to claim that the letters to his mother show, in embryo, essential features of Dahl's art, such as his fantastical imagination and his sadistic sense of humour (Sunday Times)

9780755310074: Garry Sobers: My Autobiography - AbeBooks - Sobers, Garfield: 0755310071. Review: Garry Sobers' autobiography reminds us just how wide-ranging were the achievements of this cricketing legend. 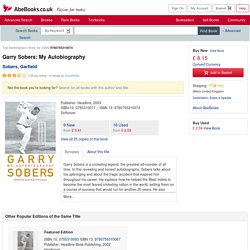 At the age of 21 he scored 365 not out playing for the West Indies against Pakistan, which remains one of the great totems of sporting achievement--despite finally being surpassed in 1994, after 36 years, and he went on to establish himself as one of the most entertaining and successful all-rounders of all time--a phenomenal left-handed batsman who racked up a Test average approaching 60, in a career that spanned 20 years, and a multi-styled bowler who took over a thousand first-class wickets. Fortunately for British cricket fans, Sir Garry toured extensively as West Indies captain and played a substantial portion of his county-level cricket at Nottinghamshire, where he set another celebrated record--first man to hit six sixes in an over.

The book is as entertaining as this great player was in his heyday ( David Llewellyn, Independent) Amazon.co. Amazon Review Garry Sobers' autobiography reminds us just how wide-ranging were the achievements of this cricketing legend. 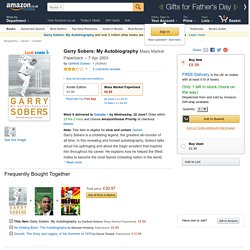 At the age of 21 he scored 365 not out playing for the West Indies against Pakistan, which remains one of the great totems of sporting achievement--despite finally being surpassed in 1994, after 36 years, and he went on to establish himself as one of the most entertaining and successful all-rounders of all time--a phenomenal left-handed batsman who racked up a Test average approaching 60, in a career that spanned 20 years, and a multi-styled bowler who took over a thousand first-class wickets. Fortunately for British cricket fans, Sir Garry toured extensively as West Indies captain and played a substantial portion of his county-level cricket at Nottinghamshire, where he set another celebrated record--first man to hit six sixes in an over.

Review. Federation of Children's Book Groups. Children's Book Awards - Shortlists and Winners - Books Lovereading4kids UK. We love Lovereading as my 5 year old loves to read new books before anyone else has a chance, she says it makes reading exciting! 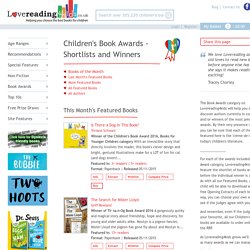 Tracey Chorley LoveReading4Kids is a modern and creative way of emphasising the value and importance of books in this digital age #booksforlifeAmrit Bunet – Teen It’s a community united by a passion for books and promoting the best there is in children’s literature.Sam Bateman and family We love Lovereading4kids because they put books in front of us we wouldn’t otherwise have read. Lovereading4kids UK - Reviews and Recommendations. Buy Books and eBooks, Read free Opening Extracts. School Zone. Science books shortlist announced The Royal Society's Young People's Book Prize shortlist has been announced and covers a range of science titles, from machines to space and flowers. 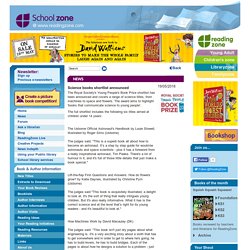 The award aims to highlight 'books that communicate science to young people'. ‘I walked alone from Siberia to Australia. The bears were fine, but the men were a problem’ The SLA Information Book Award 2016 Shortlist Is Out - Peters Books & Furniture. May 18th, 2016 The shortlist for the School Library Association Information Book Award 2016 is out and there’s a slew of wonderful books to choose from. 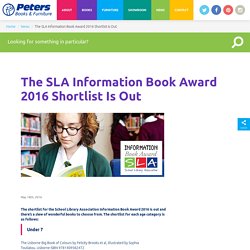 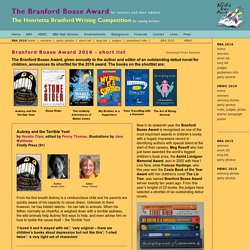 Meg Rosoff who has just been awarded the world’s biggest children’s book prize, the Astrid Lindgren Memorial Award, won in 2005 with How I Live Now, while Frances Hardinge, who this year won the Costa Book of the Year Award with her children’s novel The Lie Tree, was named Branford Boase Award winner exactly ten years ago. From this year’s longlist of 23 books, the judges have selected a shortlist of six outstanding debut novels: Julia Eccleshare says: “UK children’s publishers are more eager than ever to find and nurture talented new authors and this is an extremely exciting shortlist.

Book Awards. We have updated our cookie policy to reflect recent changes in the UK/EU law concerning the use of cookies and tracking technologies. We use cookies on this website (including the page you are currently viewing) to ensure that the site functions smoothly and to help us understand how we can improve it. If you continue without changing your settings, you are agreeing to receive all cookies from the SLA website. or view our cookie policy to find out more Show Menu | Show Sidebar (Login/Search) Home.

Every year, our booksellers nominate the book that caught their imagination more than any other, the one they believe truly stands out, in any genre; essentially, the one they believe will charm those who love reading and love books. Waterstones Booksellers. Book Awards. Peoples Book Prize - a showcase for new authors in UK - vote for your favourite book. The British Book Industry awards: all must have prizes. The best young adult (YA) books of 2016.