Improving Teaching Not Simply Measuring It. EEF_DIY_Evaluation_Guide_2013. Developing_Knowledge_Mobilisation_to_Challenge_Educational_Disadvantage_(2012) Building the capacity to use research in education requires a sustained strategic and systemic effort. The English education context offers positive elements and challenges for evidence-informed policy and practice. 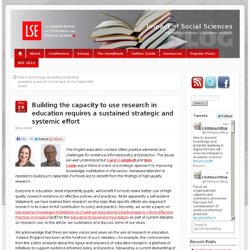 The issues are well understood but Carol Campbell and Ben Levin argue there is a lack of a strategic approach to improving knowledge mobilisation in the sector. Renewed attention is needed to build such capacities if schools are to benefit from the findings of high quality research. Everyone in education, most importantly pupils, will benefit if schools make better use of high quality research evidence on effective policies and practices. While apparently a self-evident statement, we have learned from research on this topic that specific efforts are required if research is to make its full contribution to policy and practice. Recently, we wrote a paper on Developing Knowledge Mobilisation to Challenge Educational Disadvantage to Inform Effective Practices in England [pdf] for the Education Endowment Foundation as part of current debates on research use. What can science tell us about how pupils learn best? “The mind is at last yielding its secrets to persistent scientific investigation. 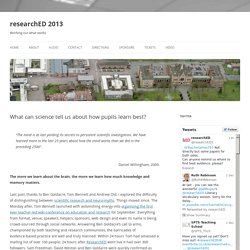 We have learned more in the last 25 years about how the mind works than we did in the preceding 2500”. Daniel Willingham, 2009. The more we learn about the brain, the more we learn how much knowledge and memory matters. Last post, thanks to Ben Goldacre, Tom Bennett and Andrew Old, I explored the difficulty of distinguishing between scientific research and neuro-myths. Things moved since. This post, I want to set out how scientific enquiry and research evidence is discovering how the mind learns, and might guide us towards ‘working out what works best’- theResearchED tagline. Is Cognitive Science good or bad science? Cognitive science is an interdisciplinary field of academic researchers from psychology, neuroscience, linguistics, philosophy, computer science, and anthropology who seek to understand the mind and apply the findings to education. 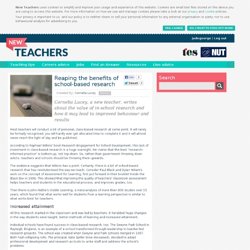 It will rarely be formally recognised, you will hardly ever get allocated time to complete it and it will almost never reach the light of day and be published. According to Raphael Wilkins' book Research Engagement for School Development, this lack of investment in class-based research is a huge oversight. He claims that the best "research-informed practice" is bottom-up, not top-down. So, rather than government throwing down edicts, teachers and schools should be throwing them upwards. The evidence suggests that Wilkins has a point. About_learning. Raising achievement through teacher research: a collection of teachers’ research projects from ‘Best Practice Research Scholarships’ Editors Mike Lambert is principal lecturer in primary initial teacher training at the School of Education,University of Wolverhampton.Dr Anne Hollinshead is senior lecturer at the School of Education, University ofWolverhampt on, and was module leader for the BPRS ‘Negotiated Study’ module which provided the framework for these teacher-research projects. 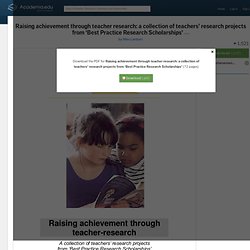 Acknowledgements Our special thanks to the contributors to this publication, and to the teachers, parents, pupilsand others who participated so readily in the research projects.Thank you also to Pat Thatcher, University of Wolverhampton, for substantial help inpreparation of this publication. CamSTAR: Research as CPD: CPD as Research. One of the key things that first attracted me to KEGS was the concept of the ‘research-engaged learning community’. 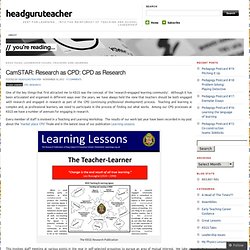 Although it has been articulated and organised in different ways over the years, we have always held the view that teachers should be both engaged with research and engaged in research as part of the CPD (continuing professional development) process. The many challenges of evidence-based teachingTeacher Development Trust. This is one of the articles in our National Teacher Enquiry Network December end of term newsletter (sign up here). 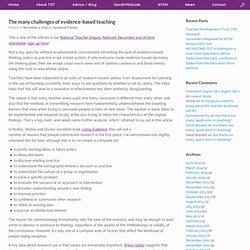 Not a day goes by without an educational commentator lamenting the lack of evidence-based thinking, policy or practice in our school system. If only everyone made evidence-based decisions, the thinking goes, then we would could reach some sort of optimal consensus and tread merrily along the road to educational utopia. Teachers have been subjected to all sorts of ‘research-based’ advice, from Assessment for Learning to the use of teaching assistants, from ways to ask questions to whether to set by ability. Teachers! What would evidence based practice look like? I was asked by Michael Gove (Secretary of State for Education) and the Department for Education to look at how to improve the use of evidence in schools. 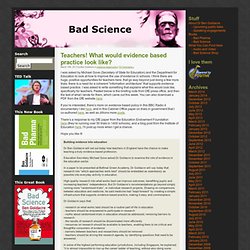 I think there are huge, positive opportunities for teachers here, that go way beyond just doing a few more trials: there is a need for a coherent “information architecture” that supports evidence based practice. I was asked to write something that explains what this would look like, specifically for teachers. Pasted below is the briefing note from DfE press office, and then the text of what I wrote for them, which came out this week. You can also download a PDF from the DfE website here. If you’re interested, there’s more on evidence based policy in this BBC Radio 4 documentary I did here, and in this Cabinet Office paper on trials in government that I co-authored here, as well as zillions more posts.

Tom Bennett's School Report: researchED 2013 Is GO. If you build it, they will come. So I’m running a conference this September.... 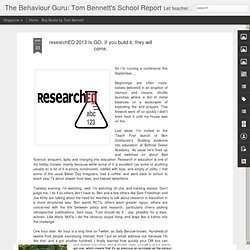 Beginnings are often noisy: babies delivered in an eruption of clamour and viscera; shuttle launches where a dot of metal balances on a skyscraper of exploding fire and prayers. This firework went off so quickly I didn't even hear it until my house was on fire. Last week: I'm invited to the Teach First launch of Ben Goldacres's 'Building evidence into education' at Bethnal Green Academy. How can we tell snake oil from science? The Doctor & The Leech. 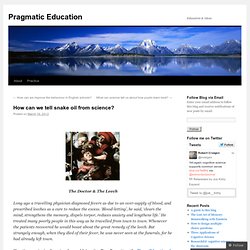 Tom bennet on goldacre. Bethnal Green Academy, a soy latte's throw from both hipster Columbia Road and the surrounding estates, was the venue for the launch of Ben Goldacres's new advocacy project: Building Evidence into Education. 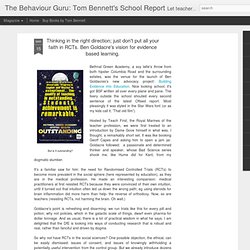 Nice looking school; it's got BSF written all over every plane and pane. The livery outside the school shouted every second sentence of the latest Oftsed report. Most pleasingly it was styled in the Star Wars font (or as my kids call it, 'That old film'). Hosted by Teach First, the Royal Marines of the teacher profession, we were first treated to an introduction by Dame Gove himself in what was, I thought, a remarkably short set. Expansive Education Network Winchester Uni.