Quest for Information on CIA/Nazi Spy Brought to End. MANHATTAN (CN) – One man’s 30-year quest for information about a Nazi spy came to an end after a federal judge ruled that the U.S. government adequately provided him the information he sought. 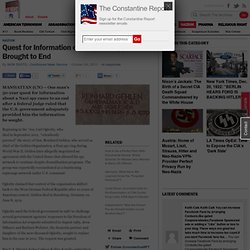 Beginning in the ’70s, Carl Oglesby, who died in September 2011, “relentlessly pursued” the story of Gen. Reinhard Gehlen, who served as chief of the Gehlen Organization, a Nazi spy ring during World War II. Gehlen later allegedly negotiated an agreement with the United States that allowed his spy network to continue despite denazification programs. The group was reportedly reconstituted as a functioning espionage network under U.S. command. Oglesby claimed that control of the organization shifted back to the West German Federal Republic after 10 years of American control. Oglesby sued the federal government in 1987 to challenge several government agencies’ responses to his Freedom of Information Act requests submitted in August 1985. But U.S. William J. Donovan. William Joseph ("Wild Bill") Donovan (January 1, 1883 – February 8, 1959) was a United States soldier, lawyer, intelligence officer and diplomat. 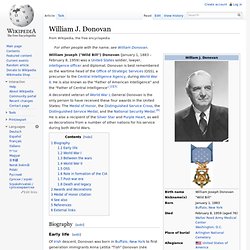 Donovan is best remembered as the wartime head of the Office of Strategic Services (OSS), a precursor to the Central Intelligence Agency, during World War II. He is also known as the "Father of American Intelligence" and the "Father of Central Intelligence".[2][3] Biography[edit] Early life[edit] William Joseph attended St. Donovan was a graduate of Columbia Law School and became an influential Wall Street lawyer. Secret-court judges upset at portrayal of ‘collaboration’ with government. 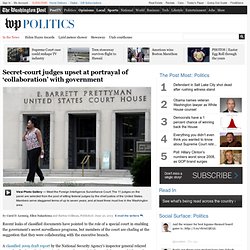 District Judge Colleen Kollar-Kotelly, the former chief judge of the Foreign Intelligence Surveillance Court, took the highly unusual step Friday of voicing open frustration at the account in the report and court’s inability to explain its decisions. “In my view, that draft report contains major omissions, and some inaccuracies, regarding the actions I took as Presiding Judge of the FISC and my interactions with Executive Branch officials,” Kollar-Kotelly said in a statement to The Post.

Mediatype:texts AND subject:"Reinhard Gehlen" PressTV: US driven by Nazi war machine. The annual VE Day – victory in Europe – celebrations held this month see, as usual, Western governments indulging in self-glory and moral superiority for their supposed defeat of German fascism. 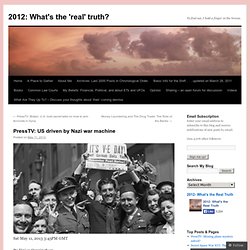 However, the official history books do not tell of the secret pact that Western governments and Washington in particular formed with the remnants of the Nazi war machine. The absorption of Nazi military practice and intelligence into the CIA and other Western organizations at the end of the Second World War had fateful and far-reaching pernicious consequences – consequences that are becoming more and more manifest today, as US-led wars of aggression rage around the world. If we want to understand why US-led wars of aggression, covert and overt, are plaguing the planet, from Iraq, Afghanistan, to Libya, Syria and Iran, we can gain much insight into today’s problems by going back to events at the end of the Second World War. 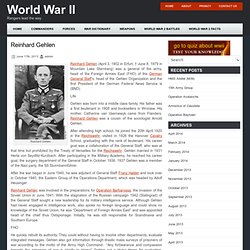 Life Gehlen was born into a middle class family. Reinhard Gehlen - The CIA & The Nazis. US driven by Nazi war machine. The annual VE Day - victory in Europe - celebrations held this month see, as usual, Western governments indulging in self-glory and moral superiority for their supposed defeat of German fascism. 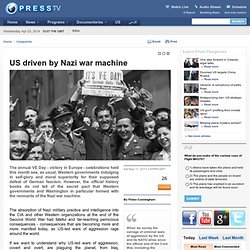 However, the official history books do not tell of the secret pact that Western governments and Washington in particular formed with the remnants of the Nazi war machine. The absorption of Nazi military practice and intelligence into the CIA and other Western organizations at the end of the Second World War had fateful and far-reaching pernicious consequences - consequences that are becoming more and more manifest today, as US-led wars of aggression rage around the world. If we want to understand why US-led wars of aggression, covert and overt, are plaguing the planet, from Iraq, Afghanistan, to Libya, Syria and Iran, we can gain much insight into today’s problems by going back to events at the end of the Second World War. Gehlen prepared well for his surrender to the Americans. Courthouse News Service.

The FBI’s shameful recruitment of Nazi war criminals. This essay is adapted from Useful Enemies: John Demjanjuk and America’s Open-Door Policy for Nazi War Criminals, which was recently published by Delphinium Books. 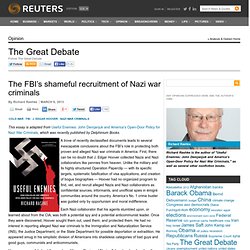 A trove of recently declassified documents leads to several inescapable conclusions about the FBI’s role in protecting both proven and alleged Nazi war criminals in America. First, there can be no doubt that J. Edgar Hoover collected Nazis and Nazi collaborators like pennies from heaven. Unlike the military and its highly structured Operation Paperclip — with its specific targets, systematic falsification of visa applications, and creation of bogus biographies — Hoover had no organized program to find, vet, and recruit alleged Nazis and Nazi collaborators as confidential sources, informants, and unofficial spies in émigré communities around the country. America’s No. 1 crime buster was guided only by opportunism and moral indifference. Michael Karkoc, Minnesota Man, Was Top Commander Of Nazi SS-Led Unit: AP Report.

BERLIN — A top commander of a Nazi SS-led unit accused of burning villages filled with women and children lied to American immigration officials to get into the United States and has been living in Minnesota since shortly after World War II, according to evidence uncovered by The Associated Press. Michael Karkoc, 94, told American authorities in 1949 that he had performed no military service during World War II, concealing his work as an officer and founding member of the SS-led Ukrainian Self Defense Legion and later as an officer in the SS Galician Division, according to records obtained by the AP through a Freedom of Information Act request.

The Galician Division and a Ukrainian nationalist organization he served in were both on a secret American government blacklist of organizations whose members were forbidden from entering the United States at the time. Karkoc now lives in a modest house in northeast Minneapolis in an area with a significant Ukrainian population. AP report: Commander in Nazi SS-led unit living in Minnesota. List of German rocket scientists in the United States. The following lists contain names of engineers, scientists and technicians specializing in rocketry who originally came from Germany but spent most of their careers working for the NASA space program in Huntsville, Alabama. 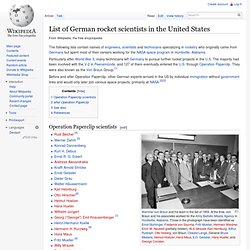 Particularly after World War II, many technicians left Germany to pursue further rocket projects in the U.S. The majority had been involved with the V-2 in Peenemünde, and 127 of them eventually entered the U.S. through Operation Paperclip. They were also known as the Von Braun Group.[1] Before and after Operation Paperclip, other German experts arrived in the US by individual immigration without government links and would only later join various space projects, primarily at NASA.[2][3] Operation Paperclip scientists[edit] Past undetected: Nazi commander found living in US since 1949. NSA-Datenschnüffelei: Grüße aus Absurdistan - Axel B.C. Krauss. Von Axel B.C. 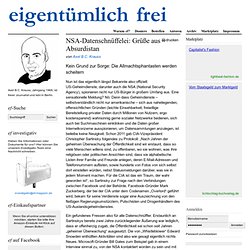 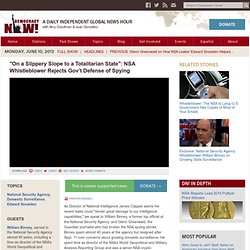 Copy may not be in its final form. AMY GOODMAN: As we continue our coverage of the National Security Agency, we are speaking to Glenn Greenwald, who has been releasing this remarkable series of exposés based on Edward Snowden getting these documents from the National Security Agency. We’re joined now by former senior NSA official William Binney, as well, who was a senior NSA crypto-mathematician, largely responsible for automating the agency’s worldwide eavesdropping network, one of the two co-founders of the agency’s Signals Intelligence Automation Research Center, resigned after the September 11th attacks, deeply concerned about the level of surveillance.

Glenn Greenwald, again, still with us, who has broken the series. Glenn, before we go to William Binney, can you talk about the latest revelation about the cyber-attacks that was your most recent exposé? GLENN GREENWALD: Sure. GLENN GREENWALD: Right. WILLIAM BINNEY: Actually, it started about then. “Digital Blackwater”: Meet the Contractors Who Analyze Your Personal Data.

The National Security Agency (NSA) in Fort Meade, Maryland, a suburb of Washington, DC, seen on 31 May 2006. June 10, 2013 | Like this article? Operation Paperclip - Iran Rational Actor - Qatari Swine Flu. The Air Force wants to swap employees with Silicon Valley giants. After admitting that the U.S. military has long trailed the private sector in technological innovation, the Air Force Research Laboratory is hoping to set up a program to temporarily swap employees with Silicon Valley giants to tap some of the valley's creativity. "There are a lot of advances and investigation in the private sector, and it's just hard to keep up when you're not in close communication with the folks that are involved," Jennifer Ricklin, chief technologist at the AFRL told Killer Apps during an Oct. 3 interview. "I'm thinking about tablets and smart phones and the big data issues and cloud computing -- all of these things that are transforming how our society operates and communicates.

" (The AFRL is the service's far-out research arm that partners with private companies to develop everything from cutting-edge aircraft engines to new stealth tech.) "We have higher security needs than the average teenager does when it comes to communications tools," said Ricklin.

The US government resisted the Internet, instead of supporting it. The question of "Who really invented the Internet? " has been one of the technological issues in the current US presidential election. This is odd, because the Internet's history has been well documented, and most of the people involved are still alive. However, the controversy has less to do with technology than with the endless battle between publicly-funded good works and private enterprise. President Obama has identified the Internet as a public good produced by the US government. In a campaign speech, he said: "The Internet didn't get invented on its own. The Fast and the Ridiculous - By James Verini.

The majority members of the U.S. House Oversight Committee have been granted their fondest wish -- their investigation into Operation Fast and Furious has caused the biggest proto-scandal in Washington, thanks to Attorney General Eric Holder's refusal to hand over documents and a House panel's vote last week to recommend the chamber cite him with contempt. No longer the private obsession of the right-wing media, Fast and Furious is on front pages and leading news broadcasts around the United States. At issue now are two questions. First, what was the exact intent and oversight of the operation, run out of the Phoenix office of the Bureau of Alcohol, Tobacco, Firearms and Explosives (ATF)? The agency says it was meant to track illicit guns going over the border into Mexico, as part of an effort to build cases against major smugglers.

Operation Paperclip. Air Force Teaching Guide Minimizes History of Recruiting Nazis, Part One. Reviews. Hunt, Linda - Secret Agenda - The United States Government, Nazi Scientists and Project Paper Clip, 1945 to 1990 (1990) Search form You are here. Reinhard Gehlen, John McCloy and the CIA. John Geraghty, on Feb 10 2007, 12:53 PM, said: I have a few books on Gehlen. Interestingly his memoirs were translated by none other than David Irving, who was recently released from an Austrian jail for Holocaust denial.Bill, I too would like to see your article.John. James H. Critchfield, Colonel, United States Army. James Hardesty Critchfield (1917 - April 22, 2003) was an officer of the US Central Intelligence Agency who rose to become the chief of its Near East and South Asia division.