How to get started with Google Cardboard. Google, one of the largest and most influential tech companies on the planet, decided to enter the virtual reality space with a smartphone shell made of cardboard. 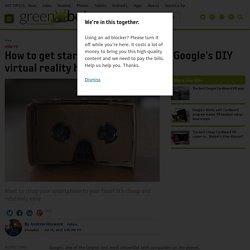 True story! It gave away a kit to Google I/O attendees in 2014, and then posted the plans online so anyone with an empty pizza box or stray shipping carton could hack together a lo-fi VR device with a handful of cheap parts. Best Google Cardboard alternatives: how to get VR on the cheap. Intro and Google Cardboard itself Ever since the Oculus Rift exploded onto the scene in 2012, the tech world has been obsessed with virtual reality. 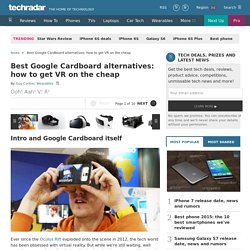 But while we're still waiting, well over three years later, for that particular headset to arrive, mobile virtual reality has happily been filling the gap. EdTech Trend: Google Cardboard. Wearable technology, including Google Glass or the newly launched Apple Watch, has made the news for years. 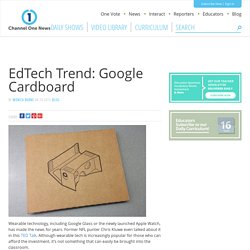 Former NFL punter Chris Kluwe even talked about it in this TED Talk. Although wearable tech is increasingly popular for those who can afford the investment, it’s not something that can easily be brought into the classroom. One affordable solution for placing wearable technology in the hands of your students is Google Cardboard. 12 best Google Cardboard apps 2016 UK - Test Centre. Introducing Google Cardboard for the Classroom by @TheEdTechDude – UKEdChat.com. So what’s going on here? 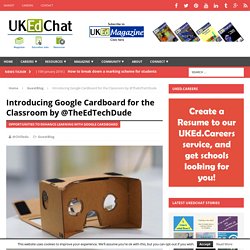 Well our two eyes see independently from each other and it’s our brain which combines the two different images and makes sense of them. Ask if your class can name and describe any other senses. Explain that sight is just one of our senses and that we also smell, taste, hear and touch. It’s our brains that that make sense of all of these things, including the way we see the world.

Ask your class some follow up questions like: Get A Free Star Wars Edition Google Cardboard...US Updates. Introducing Google Cardboard for the Classroom by @TheEdTechDude – UKEdChat.com.