Post Office Travel Money has released the findings of its latest Holiday Costs Barometer, revealing the cheapest beach destinations for a summer break in Europe. 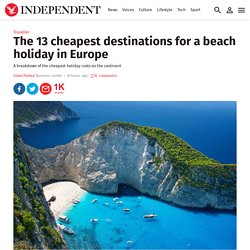 The tenth annual survey is based on the total cost of ten typical holiday expenses in 20 European beach resorts, ranked from the most to the least expensive. Holiday items considered in the survey include a cup of coffee, suncream, insect repellant, and a three-course meal with a bottle of wine for dinner. Prices for each item were sourced from national or regional tourism offices, where possible. Costs for Bulgaria were provided by budget holiday booking company Balkan Holidays and the low-cost airline Monarch supplied prices for Turkey, while additional online research was conducted to verify prices. Though British travellers have plenty of affordable beach holiday options to choose from, the Sterling has fallen from its seven-year high against European currencies, according to a press release from Post Office Travel Money. 13. Uk.businessinsider. Michaeljung/ShutterstockCape Town is one of the most affordable places to visit. 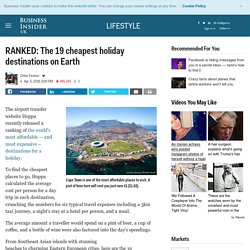 A pint of beer here will cost you just over £1 ($1.63). The airport transfer website Hoppa recently released a ranking of the world's most affordable — and most expensive – destinations for a holiday. To find the cheapest places to go, Hoppa calculated the average cost per person for a day trip in each destination, crunching the numbers for six typical travel expenses including a 3km taxi journey, a night's stay at a hotel per person, and a meal. The average amount a traveller would spend on a pint of beer, a cup of coffee, and a bottle of wine were also factored into the day's spendings. Futurism - Salt Mine Becomes A Tourist Attraction. Seaventures Dive Resort (Pulau Sipadan, Malaysia) - Hotel Reviews - TripAdvisor. 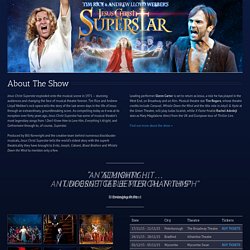 Tim Rice and Andrew Lloyd Webber’s rock opera tells the story of the last seven days in the life of Jesus through an extraordinary, groundbreaking score. As compelling today as it was at its inception over forty years ago, Jesus Christ Superstar has some of musical theatre’s most legendary songs from I Don’t Know How to Love Him, Everything’s Alright, and Gethsemane through to, of course, Superstar. Milky Way Arcs Over Earthly Rock Arch in Spectacular Photo. The glimmering Milky Way seems to sit atop the Corona Arch in Utah in this spectacular photo captured by a veteran night sky photographer. 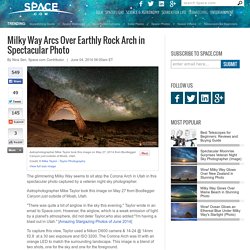 Astrophotographer Mike Taylor took this image on May 27 from Bootlegger Canyon just outside of Moab, Utah. "There was quite a bit of airglow in the sky this evening," Taylor wrote in an email to Space.com. However, the airglow, which is a weak emission of light by a planet's atmosphere, did not deter Taylor,who also added:"I'm having a blast out in Utah. " [Amazing Stargazing Photos of June 2014] To capture this view, Taylor used a Nikon D600 camera & 14-24 @ 14mm f/2.8 at a 30 sec exposure and ISO 3200.

. #1 rated Beginner Telescope. Our host galaxy, the Milky Way, is a barred spiral galaxy seen as a band of light in the night sky. Editor's note: If you have an amazing night sky photo you'd like to share for a possible story or image gallery, please contact managing editor Tariq Malik at spacephotos@space.com. Photographer Captures Spectacular Milky Way Vista from the Azores (Photo) The Milky Way galaxy arcs across the night sky in this magnificent view from the Azores, a chain of nine volcanic islands near Portugal in the Atlantic Ocean. 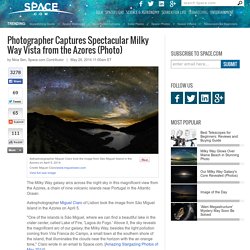 Astrophotographer Miguel Claro of Lisbon took the image from São Miguel Island in the Azores on April 5. "One of the islands is São Miguel, where we can find a beautiful lake in the crater center, called Lake of Fire, 'Lagoa do Fogo.' Above it, the sky reveals the magnificent arc of our galaxy, the Milky Way, besides the light pollution coming from Vila Franca do Campo, a small town at the southern shore of the island, that illuminates the clouds near the horizon with the an orange tone," Claro wrote in an email to Space.com. 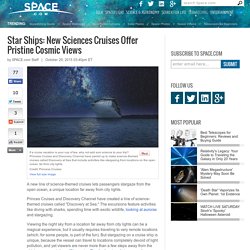 Princes Cruises and Discovery Channel have created a line of science-themed cruises called "Discovery at Sea. " The excursions feature activities like diving with sharks, spending time with exotic wildlife, looking at auroras and stargazing. Viewing the night sky from a location far away from city lights can be a magical experience, but it usually requires traveling to very remote locations (which, for some people, is part of the fun). But stargazing on a cruise ship is unique, because the vessel can travel to locations completely devoid of light pollution, and yet viewers are never more than a few steps away from the ship's accommodations. [Stargazing Tips for Amateur Astronomers] Man Isolated Himself In The Desert For 25 Years. What He Reveals Inside This Cave Is Incredible. In the high desert of Northern New Mexico, you can hear the sounds of a man entranced in his work underground in a cave. 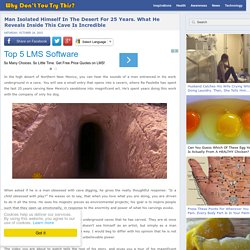 You will see a small entry that opens into a cavern, where Ra Paulette has spent the last 25 years carving New Mexico's sandstone into magnificent art. He's spent years doing this work with the company of only his dog. When asked if he is a man obsessed with cave digging, he gives the really thoughtful response: “Is a child obsessed with play?” Sunset Bungalows, Koh Rong Sanloem, Cambodia - Booking.com. Booking.com guest review guidelines To keep the rating score and review content relevant for your upcoming trip, we archive reviews older than 24 months. 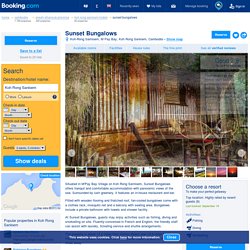 Only a customer who has booked through Booking.com and stayed at the property in question can write a review. This lets us know that our reviews come from real guests, like you. Who better to tell others about the free breakfast, friendly staff, or quiet room than someone who’s stayed at the property before? We want you to share your story, both the good and the bad. Tips for writing a great review Give us details. A Look At 21 International Borders Around The World.

International borders separate one country from another. 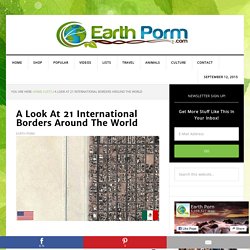 History, current events, politics and demographics shape what takes place at these borders. While borders seem like permanent fixtures they have revolved throughout time, reminding us that the only constant is change. Depending on how friendly bordering nations are borders drastically change. For instance, it’s easy to miss borders located between friendly nations located in the European Union’s Schengen zone, which are simply marked by a sign or line in the road.

Other borders are impossible to miss, for instance the border between the US and Mexico is guarded by armed guards, long lines and clearly marked signs warning against illegally crossing from one side to the other. These photos of international borders give you a taste of how both friendly and hostile countries like to secure their borders. Travel - Where wind creates cloud waterfalls. As the sun dipped lower and lower over the lush, volcanic Canary Islands, travelling steadily onward on its inexorable collision course with the sea, ripples of anticipation resonated across our small group of stargazers. 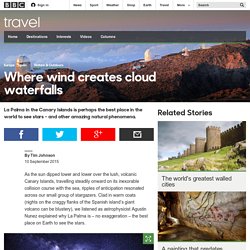 Clad in warm coats (nights on the craggy flanks of the Spanish island’s giant volcano can be blustery), we listened as astrophysicist Agustin Nunez explained why La Palma is – no exaggeration – the best place on Earth to see the stars. First, he said, its position 100km off the coast of northern Africa means it is close to the equator, so you can see stars from both the northern and southern hemispheres – but in a temperate climate with placid weather patterns uncommon in the tropics. Second, it’s very dark here, something that’s aided by an island-wide agreement to keep it that way, meaning all night-time lighting is either an orange hue (which doesn’t interfere with telescopes) or pointed down, at the ground.

Orchid Resort on Koh Rong Samloem. 8 Most Beautiful Island Countries in the World. There are a few gorgeous island countries in the world that are definitely worth visiting. Summer is fast approaching and that means it’s time to start planning your vacation. While there are many fascinating countries in the world to visit, I think there is something more adventurous, exotic and romantic about visiting an island country. Take a look at the list of 7 breathtakingly beautiful island countries in the world, which everyone should certainly visit at least once in lifetime. Malta is a beautiful southern European country in the Mediterranean Sea, which has a rich history and culture. Monkey mia - ស្វែង​រក Google. 10 Amazing Hotels You Need To Visit Before You Die. Open Hands: TravelPony.com - Where travelers save more on hotels.

*Disclosure - I received Travel Credit to use at TravelPony for my honest opinions* When it comes to traveling Hubs and I have two very different opinions on how things should go. I love to take my time getting to our final destination if we are making a long road trip, staying at places along the way. I also enjoy a nice hotel once we reach our landing spot. 10 Most Beautiful Places in the World.

Once in a while it is good to divert your mind from the daily hassle and dissonance of daily working environment and find a cool place where you can relax and enjoy with your family. There is one good place that exceeds nature and its beauty. Spending some time visiting and watching some of the most beautiful wonders of the world will make you forget all your worries and realize how much is given to you by your creator to enjoy. There are so many breathtaking places in the world that you can visit but here we are going to concentrate on 10 most beautiful places in the world.