Cancer Cure Suppressed for 80 Years: They're Finally Admitting Royal Rife Was Right. A person does not hear sound only through the ears; he hears sound through every pore of his body. 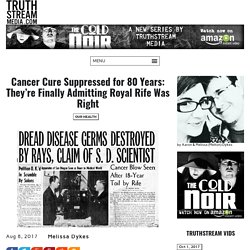 It permeates the entire being, and according to its particular influence either slows or quickens the rhythm of the blood circulation; it either wakens or soothes the nervous system. It arouses a person to greater passions or it calms him by bringing him peace. According to the sound and its influence a certain effect is produced. Sound becomes visible in the form of radiance. This shows that the same energy which goes into the form of sound before being visible is absorbed by the physical body.

Everything vibrates. Neuroscientist Shows What Fasting Does To Your Brain & Why Big Pharma Won’t Study It. What's Really Behind Mandatory Vaccines. Profits Galore: 'Global Cancer Drug Spending Hits $100 Billion in 2014’ “Worldwide spending on cancer medicines reached $100 billion in 2014, an increase of 10.3 percent from 2013 and up from $75 billion five years earlier, according to IMS Health’s Global Oncology Trend Report released on Tuesday.” [1] One hundred billion dollars is a lot of money. 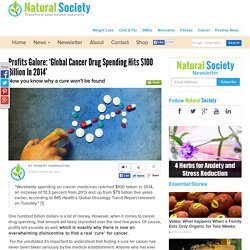 However, when it comes to cancer drug spending, that amount will likely skyrocket over the next few years. Of course, profits will escalate as well, which is exactly why there is now an overwhelming disincentive to find a real ‘cure’ for cancer. For the uninitiated it’s important to understand that finding a cure for cancer has never been taken seriously by the medical establishment. GlaxoSmithKline admits to criminal pharma fraud in 3 billion dollar case - NaturalNews.com. (NaturalNews) British registered company, GlaxoSmithKline, faces $3 billion in penalties after pleading guilty to the biggest health care fraud case in history. 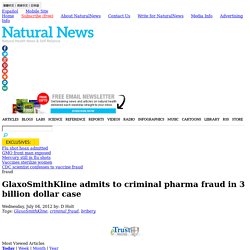 GSK admitted that physicians had been bribed to push potentially dangerous drugs in exchange for Madonna tickets, Hawaiian holidays, cash and lucrative speaking tours. They also admitted distributing misleading information regarding the antidepressant Paxil. The report claimed that it was suitable for children, but failed to acknowledge data from studies proving its ineffectiveness in children and adolescents. GSK faced charges that they had used the gifts to sell three drugs that were either unsafe, or used for purposes that were not approved. The first drug, Paxil also known as Seroxat, was touted as safe and effective for children and adolescents. The second drug, Avandia was used in Britain to treat diabetes until it was withdrawn due to safety fears, including increased risk of heart attacks. Bayer Exposed ( HIV Contaminated Vaccine ) Merck vaccine fraud exposed by two Merck virologists; company faked mumps vaccine efficacy results for over a decade, says lawsuit - NaturalNews.com.

(NaturalNews) Breaking news: According to two Merck scientists who filed a False Claims Act complaint in 2010 -- a complaint which has just now been unsealed -- vaccine manufacturer Merck knowingly falsified its mumps vaccine test data, spiked blood samples with animal antibodies, sold a vaccine that actually promoted mumps and measles outbreaks, and ripped off governments and consumers who bought the vaccine thinking it was "95% effective. 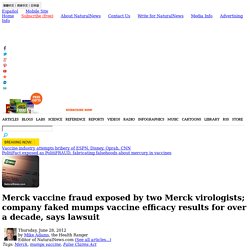 " See that False Claims Act document at:www.naturalnews.com/gallery/documents/Merck-... According to Stephen Krahling and Joan Wlochowski, both former Merck virologists, the Merck company engaged in all the following behavior: Drug companies won't deny Australia is being 'ripped off' on medicines.

‘We Are Trained To Misinform’ – Ex Pharma Sales Rep Admits Deception. (Before It's News) Jeff Roberts, Collective-EvolutionWaking Times “There is no such thing as a safe drug.” 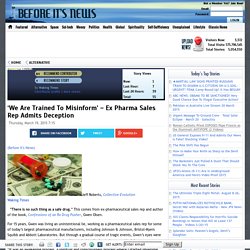 This comes from ex-pharmaceutical sales rep and author of the book, Confessions of an Rx Drug Pusher, Gwen Olsen. For 15 years, Gwen was living an unintentional lie, working as a pharmaceutical sales rep for some of today’s largest pharmaceutical manufacturers, including Johnson & Johnson, Bristol-Myers Squibb and Abbott Laboratories. But through a gradual course of tragic events, Gwen’s eyes were eventually opened to the unethical and tyrannical truth about pharmaceutical drugs. Big-Pharma Vaccines Deemed “Safe” by Big-Pharma Funded “Study” RT’s article, “Vaccines don’t cause autism, complications extremely rare – study,” states that: There is no evidence that immunizing vaccinations cause autism while any complications arising from their administration to children are extremely rare, new analysis comprised of 67 research studies has discovered. 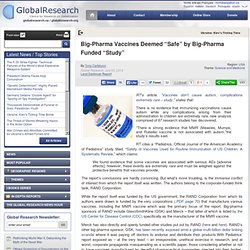 “There is strong evidence that MMR (Measles, Mumps, and Rubella) vaccine is not associated with autism,”the study’s results said. RT cites a “Pediatrics: Official Journal of the American Academy of Pediatrics” study titled, “Safety of Vaccines Used for Routine Immunization of US Children: A Systematic Review,” which claims: We found evidence that some vaccines are associated with serious AEs [adverse effects]; however, these events are extremely rare and must be weighed against the protective beneﬁts that vaccines provide. The report’s conclusions are hardly convincing. Antiviral drug stockpile a waste of money, says study. The antiviral drug Tamiflu, which Australia stockpiled to fight pandemics. 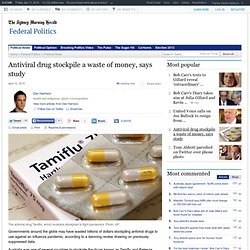 Photo: AP Governments around the globe may have wasted billions of dollars stockpiling antiviral drugs to use against an influenza pandemic, according to a damning review drawing on previously suppressed data. Australia was one of several countries to stockpile the drugs known as Tamiflu and Relenza, believing they would reduce hospital admissions and complications of influenza, such as pneumonia, in the event of an outbreak of swine or bird flu. But a review of data from trials involving more than 24,000 people, published on Thursday by the Cochrane Collaboration and the British Medical Journal, concluded the drugs were of only marginal benefit, shortening the duration of influenza symptoms by just half a day.

19 Statistics About The Drugging Of America That Are Almost Too Crazy To Believe. The American people are the most drugged people in the history of the planet. 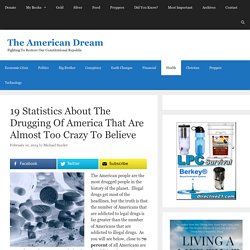