How the TPP Could Lead to Worldwide Internet Censorship. On Monday, we learned that global “leaders” had come to an agreement on the infamous Trans Pacific Partnership, or TPP. 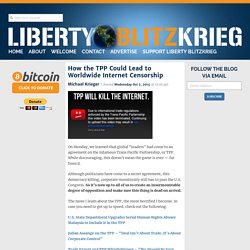 While discouraging, this doesn’t mean the game is over — far from it. Although politicians have come to a secret agreement, this democracy killing, corporate monstrosity still has to pass the U.S. Congress. So it’s now up to all of us to create an insurmountable degree of opposition and make sure this thing is dead on arrival. The more I learn about the TPP, the more horrified I become. U.S. Julian Assange on the TPP – “Deal Isn’t About Trade, It’s About Corporate Control” Trade Expert and TPP Whistleblower – “We Should Be Very Concerned about What’s Hidden in This Trade Deal” As the Senate Prepares to Vote on “Fast Track,” Here’s a Quick Primer on the Dangers of the TPP If that wasn’t enough to concern you, here’s the latest revelation. From Common Dreams: If that part isn’t obvious by now, I don’t know what is. Brace yourselves for Obamatrade. In Liberty, Michael Krieger. TPP Creates Legal Incentives For ISPs To Police The Internet. What Is At Risk? Your Rights. 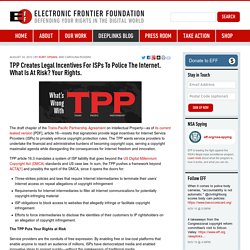 The TPP wants service providers to undertake the financial and administrative burdens of becoming copyright cops, serving a copyright maximalist agenda while disregarding the consequences for Internet freedom and innovation. TPP article 16.3 mandates a system of ISP liability that goes beyond the US Digital Millennium Copyright Act (DMCA) standards and US case law. Certification Allows US Trade Negotiators to Rewrite TPP Copyright Rules. As the negotiations over the Trans-Pacific Partnership agreement (TPP) continue to trudge along, little new information has leaked because the negotiations are being conducted under conditions of strict secrecy. 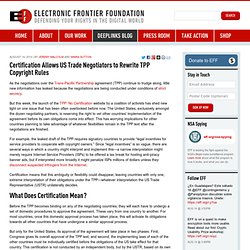 But this week, the launch of the TPP: No Certification website by a coalition of activists has shed new light on one issue that has been often overlooked before now. The United States, exclusively amongst the dozen negotiating partners, is reserving the right to vet other countries' implementation of the agreement before its own obligations come into effect. This has worrying implications for other countries planning to take advantage of whatever flexibilities remain in the TPP text after the negotiations are finished. For example, the leaked draft of the TPP requires signatory countries to provide “legal incentives for service providers to cooperate with copyright owners.” What Does Certification Mean? How It Affects Copyright and Patent Laws Australia provides another example.

» Trans-Pacific Partnership Talks Begin For Global Internet Censorship Plan Alex Jones' Infowars: There's a war on for your mind! Globalists Work Toward World Censorship. Chinese censorship is the model that corrupt politicians around the world strive for Kit Daniels Prison Planet.com June 4, 2014 Even though the 1989 Tiananmen Square Massacre took place in the heart of Beijing, Chinese citizens are among the least aware of the cataclysmic event – all because of government censorship which is now rapidly spreading beyond China. 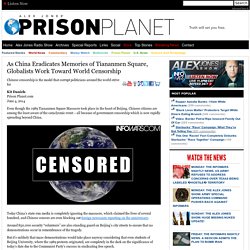 Today China’s state-run media is completely ignoring the massacre, which claimed the lives of several hundred, and Chinese censors are even blocking out foreign newscasts reporting on the anniversary. Around 850,000 security “volunteers” are also standing guard on Beijing’s city streets to ensure that no demonstrations occur in remembrance of the tragedy. TPP Leak Confirms the Worst: US Negotiators Still Trying to Trade Away Internet Freedoms. After years of secret trade negotiations over the future of intellectual property rights (and limits on those rights), the public gets a chance to looks at the results. 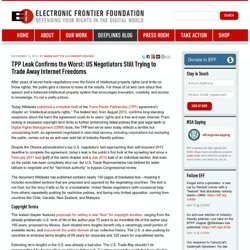 For those of us who care about free speech and a balanced intellectual property system that encourages innovation, creativity, and access to knowledge, it’s not a pretty picture. Today Wikileaks published a complete draft of the Trans-Pacific Partnership (TPP) agreement’s chapter on “intellectual property rights.” The leaked text, from August 2013, confirms long-standing suspicions about the harm the agreement could do to users’ rights and a free and open Internet. Despite the Obama administration’s top U.S. negotiators’ fast approaching their self-imposed 2013 deadline to complete the agreement, today’s leak is the public’s first look at the sprawling text since a February 2011 leak [pdf] of the same chapter and a July 2012 leak of an individual section.

And even as the public has been completely shut out, the U.S. TPP: The Biggest Threat to the Internet You've Probably Never Heard Of.