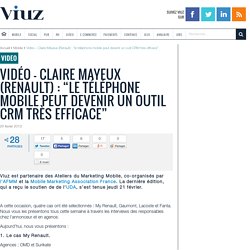 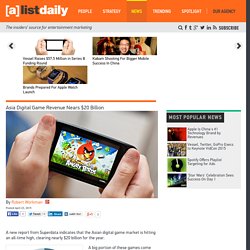 A big portion of these games come from Japan, with an estimated 45 percent, followed by China with 38 percent and South Korea with 11 percent. As for what kind of games dominate, mobile leads the charge with 59 percent, while other categories, like free-to-play MMO, social and console follow with smaller numbers. It’s expected to account for 38 percent of the worldwide digital games market, with a rise of eight percent expected by next year – making its total over $21 billion.

The report indicates that Japan, even with its smaller population than China, has a higher revenue, by 16 percent. Kabam Shooting For Bigger Mobile Success In China. Kabam has certainly established itself in the mobile market over the last few years with several hit games – but that isn’t stopping the publisher from shooting for a loftier goal. 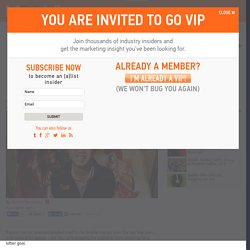 After receiving a whopping $120 million investment from Alibaba, the company now vows to create the first “billion dollar video game,” according to a report from Re/Code. COO Kent Wakeford has noted that “we’re really going all in in China.” Its Beijing office, which was first established back in 2011, will move forward with plans to make games aimed at a Chinese market – a change of pace from its usual Western development. With a market of 700 million mobile devices, it’s going to be a big move. Gaming-gen. Supercell Preps New Mobile Game. 'DomiNations' Brings Classic Strategy to Mobile. The mobile game market is seeing an amazing amount of new games coming out every week, and it's getting more difficult than ever to get noticed in this avalanche of games. 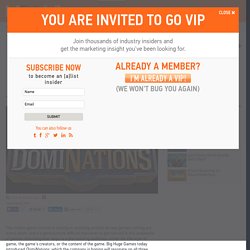 One thing that helps is a pre-existing audience, either for the style of game, the game's creators, or the content of the game. Big Huge Games today introduced DomiNations, which the company is hoping will resonate on all three points. DomiNations is certainly reminiscent of Rise of Nations, the hit real-time strategy game created by the original Big Huge Games and published by Microsoft back in 2003. Revenue From MOBA Games Set To Dominate 2015. For years, MMORPG (massive multiplayer online role-playing game)-style games have been dominant in the game industry, with Blizzard's World of Warcraft leading the charge. 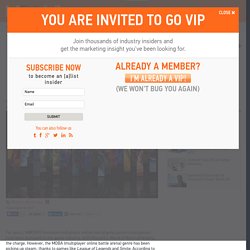 However, the MOBA (multiplayer online battle arena) genre has been picking up steam, thanks to games like League of Legends and Smite. According to Gamesindustry International's latest analysis, they could be on their way to leading the forefront of the industry. EEDAR analyst Ed Zhao laid out an examination of the market, explaining how the free-to-play approach with certain games, like most MOBA's, is an effective approach for publishers. 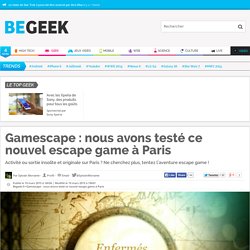 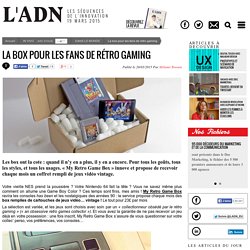 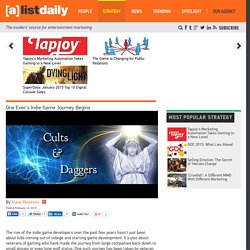 It's also about veterans of gaming who have made the journey from large companies back down to small groups or even lone wolf status. Snapchat's 'Our Stories' Gaining Millions of Views. A new report from Giga Om indicates that those who share tales in the mobile app's "Our Stories" feature are benefitting from a number of views. 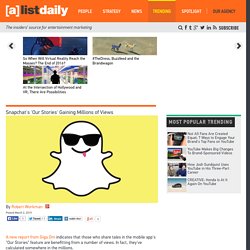 In fact, they've calculated somewhere in the millions. The reporter who wrote the story explained that a friend sent a Snapchat screenshot, showing that someone's contribution to the recent New York "Snowmageddon" event in the "Our Story" section has been viewed an estimated 25 million times, with users taking as many as 5,000 screenshots of the story. Under Night In-Birth EXE:Late. La connexion entre événements musicaux et fans. Applications Mobiles - Agence Web Digistart Arras. Selling Emotion: The Secret of 'Heroes Charge' Sony Doubles Down on Games. Sony is promising big things for future profits, looking to boost them to over $4 billion by the end of FY 2017, according to CEO Kaz Hirai's three-year plan. 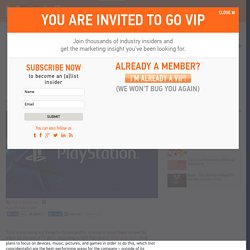 Hirai plans to focus on devices, music, pictures, and games in order to do this, which (not coincidentally) are the best-performing areas for the company – outside of its financial services, which are little-known outside of Japan but which have consistently delivered billions in profits over the last decade. Hirai expects Sony to be on course for a minimum operating profit of ¥500 billion ($4.20bn) by the end of FY 2017 on March 31, 2018. Current Sony forecasts put operating margins for FY 2015 at just ¥20 billion. "Sony is positioning Devices, Game & Network Services, Pictures, and Music as the segments that will drive its profit growth over the next three years," said Hirai, speaking to investors in Japan.

December App Downloads Show 'The New Reality Of Apps' When it comes to app downloads, there's no question that people love them. But there's also a question of whether companies are better prepared to provide more of them. 'Best Fiends' YouTube Success With PewDiePie Shows The Impact Of Influence. We've talked previously about what drives the success of a mobile game, whether it's a popular idea that takes off quickly (like Flappy Bird) or the involvement of a major development team (Angry Birds) or even a brand name that shoots up the charts like magic. However, as we've stated in the past with our articles, sometimes all you need to capture mobile lightning in a bottle is the right partner. That's certainly the case with Seriously, a start-up company that has produced a mobile game called Best Fiends. First introduced back in October on the App Store, Fiends has become a big success, not only receiving a recommendation on the site by Apple themselves, but also a huge push from YouTube sensation PewDiePie, according to Pocket Gamer.

Untitled. Monetizing the Next 2 Billion: Business Models for Emerging Markets. The scale of mobile has become a hot topic among technology investors, and rightfully so, with the mobile industry dwarfing the size of other technology sub-verticals. The smartphone installed base is quickly approaching 2 billion and may have already overtaken PCs. This is incredibly impressive given that the smartphone revolution only began in 2007, whereas the PC paradigm took hold decades ago. But we aren’t close to being done yet. As prices for hardware and data plans continue to drop, the smartphone installed base is expected to exceed 4 billion within the next five years. Feature phone owners upgrading to their first smartphone are also likely to catalyze this growth. Market Group Performance Based on iOS and Google Play Data As we mentioned in our 2014 Retrospective, emerging markets have seen sharp growth in downloads but remain far behind developed markets like the US and Japan in revenue generated through iOS and Google Play.

Mobile Game Portfolio Strategies You Need to Know in 2015. If you deal with mobile games, finding the next Clash of Clans (ideally before it becomes Clash of Clans) is a top priority. But without knowing how each mobile gaming company’s app lineup impacts their bottom lines, it can be a big challenge finding that next massive hit. App Annie is excited to announce its latest report, Portfolio Strategies in the Mobile Gaming Industry, which analyzes over 60 companies’ strategies towards building their app portfolios, including each strategy’s pros and cons.

SmartPhoneActu. 'Best Fiends' YouTube Success With PewDiePie Shows The Impact Of Influence. Wargaming's Rocking New Deal With Vevo. Wargaming.net has done quite a suitable job when it comes to the word-of-mouth popularity from its online games, including World of Tanks, World of Warplanes, and the forthcoming World of Warships. Wargaming has taken an interesting turn with its latest sponsorship deal, as it has joined forces with music video service Vevo to spread the word about Wargaming through totally unique channels.

The campaign, which will target the general rock and metal genres that the music channel has to offer, will focus on three of Wargaming's biggest titles, including Tanks, Warships and World of Warplanes, with better awareness of the brand, according to Pocketgamer.biz. How Nintendo Can Make Creators Happy Again. The launch of Nintendo's Creator's Program this week and the terms involved has sparked some upset from YouTubers at the legacy brand's way of approaching content. Nintendo sees an opportunity to monetize these videos, giving creators 60 to 70 percent of the money from YouTube while letting creators use otherwise copyrighted material that the company has been diligent about taking down. The program has created a bit of a dilemma for creators who want to be involved, but feel there is a conflict of interest. “A YouTuber who makes money from game criticism and game reviews would have a problem reviewing a Nintendo game.