DIY Industrial Black Pipe Bookshelf! : 13 Steps. I sanded each panel down to 120 grit and then applied a coat of hard wax oil. 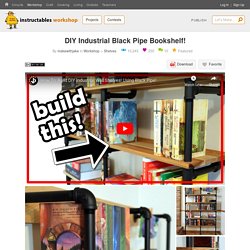 Wooden Blocks Wall Art : 5 Steps. Labyrinth Puzzle Box : 13 Steps. This interactive partition system separates spaces physically, but unites people with playfulness! Inspired by a detail found on Korean drums (where you adjust the drum’s tautness by interacting with the strings on its side), the Gyozip is a partitioning system that’s more focused on creating something that isn’t socially destructive. 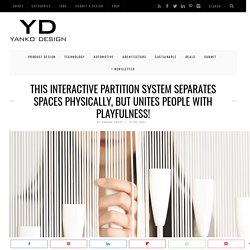 Rather than separating people in a literal sense, the Gyozip is a physical separator, but it’s also a canvas where people on both sides of the partition can interact with it, creating art in the process. The Gyozip features an outer frame with multiple cords running vertically, and conical channels that slide up and down, either separating the cords or clustering them together. Building Giant Articulated Hands (carved From Wood for Social Distancing) : 24 Steps. These are my pile of "prototypical fingers", which is still seems like an uncomfortable phrase to use for some reason. 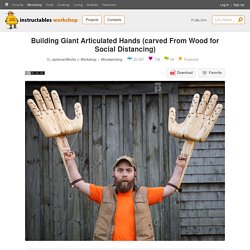 It took a little while to work out the best design to make the finger function both by letting me collapse it down by pulling a string and then using a bungee cord to return it straight again. Decathlon. This greenhouse-mimicking dome helps harvest rainwater and foster sapling-growth. The Agrodome is environment friendly in more ways than you’d think. 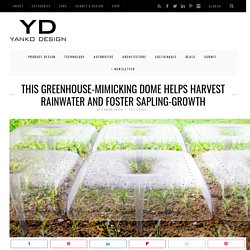 Sure, it creates a greenhouse-like environment for plants, enabling better growth, but it also comes made from recycled plastic waste! The Agrodome is made from PET sourced from recycled plastic bottles. The classic Alfa Romeo 33 Stradale gets a fan-made makeover after 52 years! Considered one of the first supercars to ever be made, it’s difficult to believe that the Alfa Romeo 33 Stradale dates back as far as 1968. 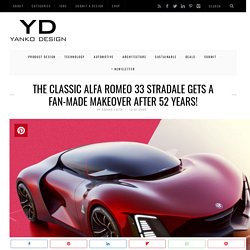 The 33 Stradale (which happens to be one of the rarest and most iconic automobiles of today, selling for well over $15 million) practically set the stage not just for the Italian manufacturer’s legacy, but for other supercars to follow suit… and although it looks good even today, 52 years is long enough to want to see a contemporary design refresh. Simone Cistulli’s 33 Stradale Hommage concept is a modern tribute to the classic supercar, taking what’s familiar about its design and amping it up to create something that is equally eye-catching yet contemporary. The Hommage retains the 33 Stradale’s buxom elegance with the right curves in the right places, but amps up its aggression with a reduced overhang on the front and the back, and a complete redesign of the car’s “face”. 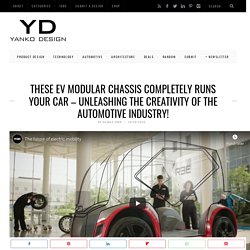 Sure there are numerous electric and hybrid vehicles on the roads, while others in development with technological advances to make e-mobility better than ever, addressing the underlying concerns with carbon emissions. That said, Israeli startup REE Automotive has adopted a very different approach with its e-mobility platform architecture which caters to a broad range of electric vehicles. Daniel Barel, REE Co-Founder, and CEO REE Automotive said, “EVs, particularly e-delivery vehicles, are in huge demand, with growth drivers including global carbon-emission regulatory policies coupled with booming e-commerce.” Keeping this in mind, the modular platform is going to change how we perceive electric mobility today. Daniel also added, “Our platform provides the perfect blank canvas for our customers on which to build EVs tailored to their needs.” 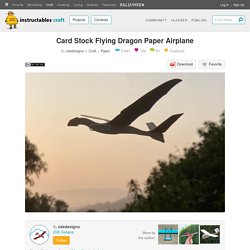 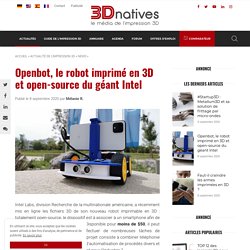 Patouch 2.0 Gant ouvre porte antibactérien - W6 Design. The palm-size PrintPods can print on materials your desktop printer doesn’t even dream of. The magic in the PrintPods lies in the fact that it’s smaller than a can of spray paint but holds technology within it that makes it much more versatile. 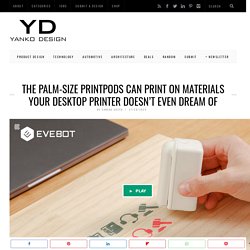 Designed to print in a variety of permanent, skin-friendly, and even invisible inks, the PrintPods is a ridiculously small handheld printer that you can wave over objects to print directly onto them. ARMPAL: 3D Wooden Assembly Tabletop Game, Unlimited Plays! by Mongda. This automatic tuner just takes seconds to accurately tune any string based musical instrument! Have you ever attended a gig where you cheer on the artist when they come onstage and then awkwardly wait for 10 minutes while they tune their instruments? 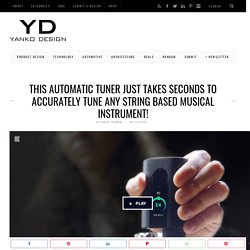 Not that anyone is getting aggressively mad about it but it certainly isn’t the best thing to keep your audience waiting when it could have been avoided by using a more efficient tuning process. Roadie3 is an automatic multi-instrument tuner that saves you time without compromising on the accuracy – let’s turn it up! Designed to make tuning faster than ever for musicians, Roadie3 works on multiple instruments effortlessly as long as they have geared pegs like electric guitars, acoustic guitars, classical guitars with nylon strings, pedal steel guitars, ukuleles, mandolins, banjos, to name a few. This tiny pod-shaped device is the world’s smallest reusable water purifier. Simply drop the GoPure pod into any bottle of tap water and it instantly begins purifying and remineralizing it, effectively saving you big bucks by not having to buy mineral water bottles each time… while obviously giving you access to pure, potable water.

Designed as a ridiculously tiny, reusable device, the GoPure pod comes with a plastic housing on the outside and a porous ceramic core on the inside. Through physical movement, convection currents, and Brownian motion, the water remains in continuous contact with the core, which in turn acts as a magnet to attract impurities. This process effectively eliminates common contaminants in tap water like lead, chromium, arsenic, copper, mercury, chlorine, fluoride, and E.coli, while continuously neutralizing bad taste and odor, and balancing the pH to an ideal 7.4.

The tiny, portable nature of the GoPure makes it perfect to take with you wherever you go. Designer: PuriBloc Click Here to Buy Now. World’s first mechanical music box to play any song using your smartphone! Music boxes bring the tunes of nostalgia back and how! Back in the day they were considered a thoughtful gift and played one song over and over. The intricate details of the music box made it a collectible for years, it came in so many playful themes like horses on a carousel or a piano and I always loved watching the strings pop up and down when it played songs. While music boxes have gathered dust and music streaming apps have taken over, we don’t have to choose between the past and the present – Muro Box, the first app-controlled music box, brings the best of both back to you! 3D Cardboard Labyrinth Maze : 19 Steps (with Pictures) - Instructables. Introduction: 3D Cardboard Labyrinth Maze Hi Everybody, Lego : le Robot Inventor, nouveau fer de lance de la gamme Mindstorms.

What happens when you manage to kill an actual cactus plant as well? (guilty as charged) You get some green that never dies but adds functionality to your home. This is exactly what the team at Qualy Design has managed to do. The ultra-minimal Zooz Concept 1 is an e-motorcycle that looks like nothing we’ve seen before. The Concept 1 from Zooz shatters the very perception of what a motorcycle should look like. Designed with the appearance of the skeleton of an e-bike, the Concept 1 feels like someone took a motorcycle and Marie Kondo’d the heck out of it… but within it sits a powerful 72-volt QS Motor, a controller, and under-slung battery pack jammed with Samsung 35E cells that allows the Concept 1 to travel at speeds of 60mph while weighing a mere 85lbs.

Jaguar just released a 4-part masterclass on their car design process! Hosted by Jaguar’s designers, the 4-part series gives an insight into Jaguar’s design process, while the last video is a fun, DIY-home edition of an automotive clay modeling session using tools and implements you’d find around your house.

The first three episodes of the Masterclass guide us through how an idea is translated into a final product, with the first step being sketch ideation. Led by Chief Creative Designer Dominic Najafi, the episodes show the gradual progression of the Jaguar I-Pace on sketch, before being taken to the Photoshop rendering level by Matthew Beaven, Chief Exterior Designer. The third film follows Chris Scholes, Senior Alias Modeller, as he then proceeds to take those 2D renders and develop them into immaculate 3D surfacing using Autodesk Alias.

Watch the videos below! This BMW Motorrad electric concept is bringing back retro with the WWII-era sidecar! We love seeing designers get creative with electric bikes! Rocket Ship Lamp : 4 Steps (with Pictures) - Instructables. Sign in - Google Accounts. At just $91, the RODE NT-USB Mini is the the best budget podcasting microphone you can buy. Without getting into the deep end, audio equipment can be a tricky business. The usual problem with audio gear is that its price tag is almost indicative of its quality. The higher the price, usually the better the quality, and the lower the cost, the larger the compromise on your end result. The 3D printed MH-19 multifunctional tool reduces contact risk when you step out for essential items.

Mesmerizing Magnetic Wall Clock : 24 Steps (with Pictures) - Instructables. Introduction: Mesmerizing Magnetic Wall Clock. This invention helped me write again - BBC Stories. This tabletop device’s kinetic sand paintings are the perfect blend of art and algorithm. This ‘Wooden Chandelier’ helps add a unique rustic touch to an interior space. This sensor-equipped resistance band gives you a fully personalized gym workout… at home. This Porsche 911 concept uses nature-inspired design to look menacing. Nature is filled with billions of inspiration sources, from form design to CMF, from natural characteristics to animal behavior. Throw away the HDMI Cable… This wireless display transmitter is the future of presentations. Wooden Product Designs that prove why wood is good! A DJ booth you can fit in your backpack.

First we had DIY cardboard VR headsets, now we’ve got DIY cardboard drones! This desktop lightbox makes your lighting setup as advanced as your camera. Interesting Engineering on LinkedIn: "This unique device helps those with limited arm mobility to eat via twitter.com/liftware" The PILLR Elevated Laptop Stand is a pragmatic+minimal way to reduce fatigue. This foldable light box goes from flat-packed to photo studio within seconds! The Spot A.I. Camera is like Google Lens for children who are curious about the world.