Everything You Need to Know About Parental Controls. Do Your Parents Spy on You? Photo Do your parents keep track of your whereabouts through the location-tracking feature of your phone? 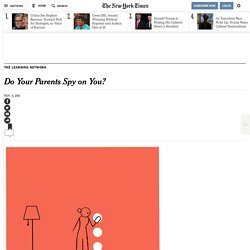 Do they look at your social media accounts or read your texts or emails? And if so, do you mind? Nick Wingfield begins “Should You Spy on Your Kids?” By describing how he and his wife have used the location-tracking capability in their phones to find each other. She and I have both tracked the whereabouts of our 13-year-old daughter using her phone to reassure ourselves that she was on her way home from school or a trip to the store.When did you start working for the National Security Agency, I’ve asked myself in jest.Most Americans don’t like the idea of their government spying on their internet activities, and a lot of them have misgivings about companies tracking their online habits for commercial purposes. Students: Read the entire article, then tell us: — What kind of tabs do your parents or guardians keep on your digital behavior?

Students 13 and older are invited to comment. When Tech Is a Problem Child. Fair enough, but what should be in such a plan? 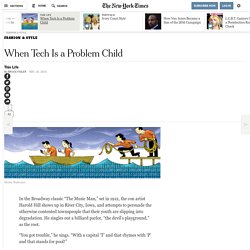 As the parent of adolescents, I want more than bromides. I want to know what other parents are actually doing that works. For the last six weeks, I’ve circulated (on social media!) 20 questions covering topics like homework, passwords, bedtime and punishments. I received responses from more than 60 families, and though the survey was unscientific, the answers have already changed how we manage tech at my house. FIRST PHONES The vast majority of parents who responded gave their children their first phones in sixth or seventh grade, with a few holding out until high school. Other popular restrictions include: “Writing an expected behavior contract.” Another is a partial ban on group texting. Phones during friend visits are another issue: “Nothing more disappointing than seeing my children’s friends bring their devices to my home and have them focus on the devices to the exclusion of hanging out with my children.”

Protecting Your Digital Life in 7 Easy Steps. In an interview, Mr. 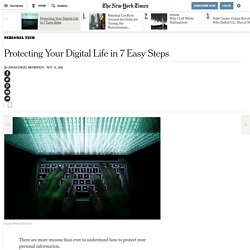 Larson walked us through some of the basic steps he recommended. We added a few of our own, based on additional interviews. We encourage you to write back with feedback on this article. If the instructions are too vague, the apps aren’t working for you or you have additional questions, we want to hear about it. Send an email to smarterliving@nytimes.com. Now, let’s encrypt. Photo 1. Encryption is a fancy computer-person word for scrambling your data so no one can understand what it says without a key. Mr. He said the best way to destroy data was not to delete it, because it could potentially be resurrected from a hard drive, but to encode it in “a secure form of cryptography.”

Signal is one of the most popular apps for those who want to protect their text messages. “You can be sure by looking at the code that they’re not doing anything weird with your data,” Mr. That means that the app allows you to use emojis, send pictures and enter group texts. Mr. 2. 3. Mr. 4. Should You Spy on Your Kids? When did you start working for the National Security Agency, I’ve asked myself in jest. 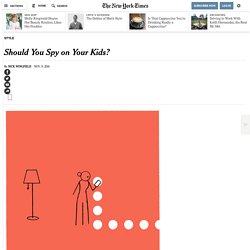 Most Americans don’t like the idea of their government spying on their internet activities, and a lot of them have misgivings about companies tracking their online habits for commercial purposes. But when they are presented with the tools and opportunity to play Big Brother with others in their family, it’s tough for some to resist. I’m not just talking about family members who register on the creepy-stalker side of the spectrum, although there are certainly jealous spouses and overbearing parents out there who surveil their partners and children with an unhealthy vigilance. Digital monitoring — from tracking those whom loved ones communicate with to snooping on their social media accounts to checking their locations — is becoming common even among people who view themselves as mindful of the boundaries with their children and partners.

Is there such a thing as responsible spying on loved ones? Photo. When Tech Is a Problem Child.