What Will Ivanka Trump Do After She Leaves the White House? Ivanka and Jared, aged with FaceApp. 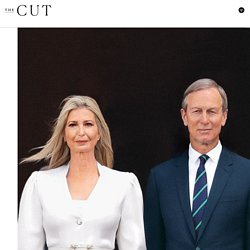 Photo: Source Photograph: Max Mumby/Indigo/Getty Images The Hamptons season was in full, humid swing when Ivanka Trump went missing at its most important geezer party. Each Fourth of July weekend, Lally Weymouth, the 76-year-old daughter of the Washington Post’s former owners, celebrates her birthday with an event that’s like a “D.C. –New York–glitterati bar mitzvah,” says Anthony Scaramucci, a guest at the seated dinner for hundreds in a striped tent on her estate, where a microphone is set up on a stage for speeches attesting to her grit and longevity. Weymouth’s crowd is the mix of politicos, media personalities, and financiers that drives Americans crazy — they’re supposed to hate each other, not party together — from Commerce Secretary Wilbur Ross to Democratic fund-raiser Alan Patricof to ex-titans like former Goldman Sachs CEO Lloyd Blankfein. 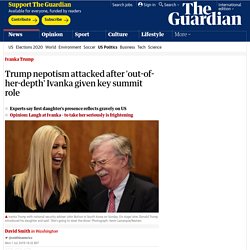 On Saturday, the French government released a video from the G20 summit in Osaka that showed Ivanka awkwardly interjecting with the French president, Emmanuel Macron, British prime minister, Theresa May, Canadian PM, Justin Trudeau and IMF director Christine Lagarde, whose icy expression spoke volumes. During the summit, Ivanka was also included in photographs of a group of leaders.

A day later, Trump’s 37-year-old daughter became one of the few Americans to set foot inside North Korea as her father held nuclear talks with Kim in the demilitarised zone. The first daughter described the event as “surreal”. Then, addressing US forces stationed in South Korea, Donald Trump invited Ivanka on stage and promised: “She’s going to steal the show.” 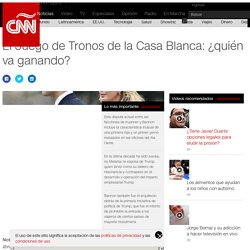 This article was originally published on The Conversation. 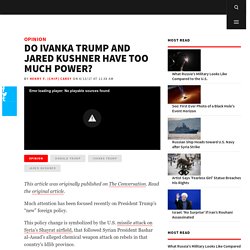 Read the original article. Much attention has been focused recently on President Trump’s “new” foreign policy. This policy change is symbolized by the U.S. missile attack on Syria’s Shayrat airfield, that followed Syrian President Bashar al-Assad’s alleged chemical weapon attack on rebels in that country’s Idlib province. The National Security Council has also been restructured. Former Director Michael Flynn resigned after lying about his meetings with the Russian ambassador to the U.S. What is driving this apparently positive change? The two family members have strengthened a White House faction Bannon describes, not admiringly, as the “New Yorkers” or simply “Goldman Sachs.” As a comparative political scientist who studies different types of governments, I’m interested in how personal rule linked to family can erode democratic institutions in favor of authoritarianism. 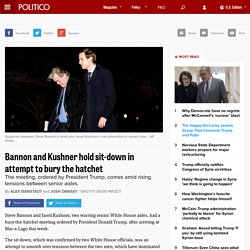 The sit-down, which was confirmed by two White House officials, was an attempt to smooth over tensions between the two men, which have dominated headlines for days. Whether the meeting was successful in creating a détente – and how long it lasts – is an open question, especially in a White House that has been dominated by infighting. Story Continued Below Bannon and Kushner had for months been allies. The State of Trump's State Department - The Atlantic. The flags in the lobby of the State Department stood bathed in sunlight and silence on a recent afternoon. 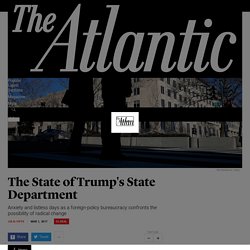 “It’s normally so busy here,” marveled a State Department staffer as we stood watching the emptiness. “People are usually coming in for meetings, there’s lots of people, and now it’s so quiet.” The action at Foggy Bottom has instead moved to the State Department cafeteria where, in the absence of work, people linger over countless coffees with colleagues. (“The cafeteria is so crowded all day,” a mid-level State Department officer said, adding that it was a very unusual sight. “No one’s doing anything.”) “It just feels empty,” a recently departed senior State official told me.