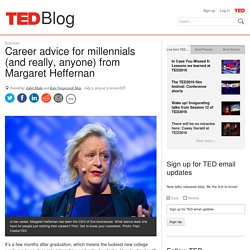 What advice does she have for people just starting their careers? First: Get to know your coworkers. Photo: Paul Clarke/TED It’s a few months after graduation, which means the luckiest new college grads are knee-deep into internships and entry-level jobs. How to stand out? Heffernan’s TED Book, Beyond Measure: The Big Impact of Small Changes, rounds up the academic research that backs up her workplace-tested insights. Just before Heffernan hosted the TED@BCG conference, she sat down with curator Juliet Blake to offer advice for young people just starting their careers. The job requirement no one tells new hires about: Build your social capital. “Social capital is a form of mutual reliance, dependency and trust. Social capital develops from people spending time together. 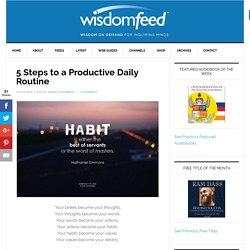 Mahatma Gandhi Let’s face it, at one point or another we have all suffered from having too much to do and feeling like there is too little time in the day. When life is pulling us in so many directions at once, how can we make the best of ourselves and our time? The to-do lists seem endless, and we often find ourselves easily distracted from the task at hand. One way to harness this constant assault on our productivity is to combat it with a daily routine. 1) Protect the early hours Don’t hit snooze on the alarm. 2) Eat a healthy breakfast Seems a bit cliché, but our body runs better on premium fuel. 3) Focus on one thing at a time The easiest way to lose focus is by dividing our attention. 4) Leave work at work Don’t walk out of the door with a list of things to do later.

5 Steps to a Productive Daily Routine. SMART Goals - Time Management Training From MindTools.com. The trouble with not having a goal is that you can spend your life running up and down the field and never score.– Bill Copeland Do you ever feel like you're working hard but not getting anywhere? Maybe you see little improvement in your skills or achievements when you reflect on the last five or 10 years. Or perhaps you struggle to see how you'll fulfil your ambitions during the next few years. Many people spend their lives drifting from one job to another, or rushing around trying to get more done while actually accomplishing very little. Setting SMART goals means you can clarify your ideas, focus your efforts, use your time and resources productively, and increase your chances of achieving what you want in life. 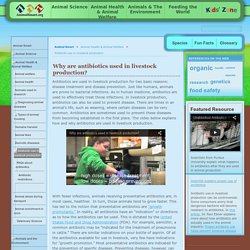 Just like humans, animals are prone to bacterial infections. As in human medicine, antibiotics are used to effectively treat those infections. In livestock production, antibiotics can also be used to prevent disease. There are times in an animal’s life, such as weaning, where certain diseases can be very common. Antibiotics are sometimes used to prevent these diseases from becoming established in the first place. Pangolins, elephants win big protections at United Nations wildlife gathering. October 3, 2016 A Humane Nation--Wayne Pacelle's Blog PreviousNext The parties rejected a proposal to allow limited international trade in rhinoceros horn. 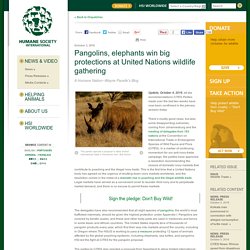 Bob Koons All eight species of pangolins will hopefully be given increased protection. Tikki Hywood Trust The delegates failed to list all African lions on Appendix I. 500pxPrime Update, October 4, 2016: All the recommendations CITES Parties made over the last two weeks have now been confirmed in the plenary session today. There’s mostly good news, but also some disappointing outcomes, coming from Johannesburg and the meeting of delegates from 183 nations at the Convention on International Trade in Endangered Species of Wild Fauna and Flora (CITES).

Sign the pledge: Don't Buy Wild! The delegates have also recommended that all eight species of pangolins, the world’s most trafficked mammals, should be given the highest protection under Appendix I. To commemorate Architectural Record’s 125th anniversary, our editors have chosen to honor 125 of the most important works of architecture built since the magazine’s founding in 1891. 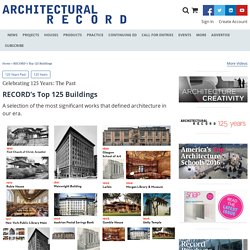 This was not an easy task. We started by polling a group of distinguished critics and scholars for nominations, but the final list is ours. While many inclusions are obvious, others may be surprising, or a little controversial—as are some omissions. And, we know, all 125 might not make the list at RECORD's next big birthday: time inevitably changes not only our tastes, but how we understand history. Click through the slideshow above, and visit the pages below, to see all the buildings on our list. 5 Steps to a Productive Daily Routine.