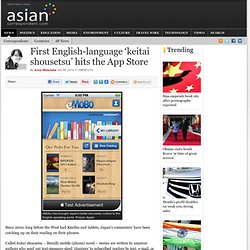 Picture: Apple Since 2000, long before the West had Kindles and tablets, Japan’s commuters’ have been catching up on their reading on their phones. Called keitai shousetsu – literally mobile (phone) novel – stories are written by amateur authors who send out text-message-sized ‘chapters’ to subscribed readers by text, e-mail, or by posting them on an online notice board. Now, a new iPhone app has brought this method of self-publishing to English speakers. eMobo already has a database of thousands of ‘books’ from it’s parent website Text Novel, but the app allows users to write and update stories on the run, ensuring the app’s database is an ever growing one.

To keep SMS costs down and to avoid scrolling, original keitai shousetsu chapters would only contain up to 100 characters. Modern short stories from your mobile. Every night after work, Japanese barman Ryu got out his mobile phone and wrote about his day. 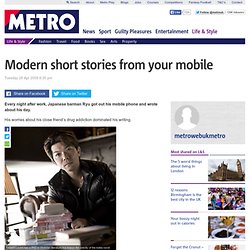 His worries about his close friend’s drug addiction dominated his writing. As he wrote, he sent the barroom blogs to his friends’ mobile phones. Their reaction to the story, which Ryu entitled Tokyo Real, convinced him to publish it online. His keitai shousetsu â or mobile phone novel â was an overnight success and has now been downloaded by more than 3million people in Japan. It has been published in more conventional paper format by a mainstream Japanese publisher and made into a film. Last year readers organised a march through the Tokyo streets to raise awareness of the dangers of drugs. Anthology of European Electronic Literature - Works. Anthology of European Electronic Literature - Works. To launch this work you will need Adobe Flash Player. 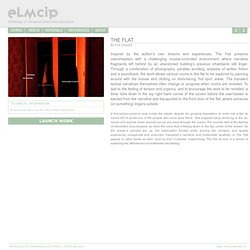 By Andy Campbell Inspired by the author’s own dreams and experiences, The Flat presents users/readers with a challenging mouse-controlled environment where narrative fragments left behind by an abandoned building’s previous inhabitants still linger. Through a combination of photography, parallax scrolling, snippets of written fiction and a soundtrack, the work allows various rooms in the flat to be explored by panning around with the mouse and clicking on shimmering ‘hot spot’ areas. The transient textual narratives themselves often change or progress when rooms are revisited. To add to the feeling of tension and urgency, and to encourage the work to be revisited, a timer ticks down in the top right hand corner of the screen before the user/reader is ejected from the narrative and transported to the front door of the flat, where someone (or something) lingers outside. Anthology of European Electronic Literature - Works. La disparue. Electronic Literature Directory. The entry was drafted at the University of Coimbra, Portugal during the Winter 2013-14 term, as part of the entry author's doctoral program "Materialities of Literature. 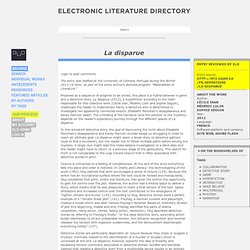 " Proposed as a sequence of enigmas to be solved, this piece is a hybrid between a game and a detective story. La disparue (2012), a hyperfiction according to the team responsible for this collective work (Cécile Iran, Médéric Lulin and Sophie Séguin), challenges the reader to impersonate Harry, a detective who is determined to investigate two apparently connected events: Elisabeth Monohan’s disappearance and Kacey Harnois’ death. The unfolding of the narrative (and the solution to the mystery) depends on the reader’s exploratory journey through the different spaces of La disparue. In this whodunit detective story, the goal of discovering the truth about Elisabeth Monohan’s disappearance and Kacey Harnois’ murder keeps us struggling in order to reach an ultimate goal. Digital Fiction by Dreaming Methods. Gameart & mediaart from the digital subconscious: : andordada : a poem endless written out of wlan hotspots and own data. 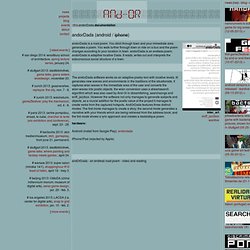 You stroll through town and your immediate area generates a poem. You walk further through town or ride on a bus and the poem changes according to your location in town. andorDada is an endless poem; andorDada is adaptive locative Dada. It reads, writes out and interprets the subconscious social structure of a town. The andorDada software works as an adaptive poetry-tool with locative levels. Hardware: Android (install from Google Play): andordada iPhone/iPad (rejected by Apple) andOrDada - an endless road poem - video and reading Concept Usage AndOrDada was made first for the iphone. 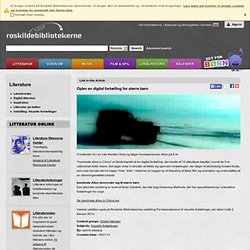