Hands Off my Healthcare​

GOP lawmakers face tough decisions after rowdy town halls on ACA repeal. In crowded town halls around the country, congressional Republicans had many eye-opening encounters this past week with Americans who voiced fear and anger over the prospect that they will lose their health insurance if the Affordable Care Act is repealed. 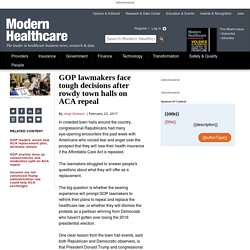 The lawmakers struggled to answer people's questions about what they will offer as a replacement. The big question is whether the searing experience will prompt GOP lawmakers to rethink their plans to repeal and replace the healthcare law, or whether they will dismiss the protests as a partisan whining from Democrats who haven't gotten over losing the 2016 presidential election. One clear lesson from the town hall events, said both Republican and Democratic observers, is that President Donald Trump and congressional Republicans need to quickly coalesce around a solid ACA replacement plan they can convincingly sell to the public. But others, like Sen. GOP rep: Protests could derail Republicans' plan to repeal Obamacare.

GOP lawmaker: 'Obamacare' may be saved by progressive activism. Former House Speaker John Boehner (R-Ohio) has been watching the health care fight from retirement, and he’s come to his conclusion: his party is likely to fail. 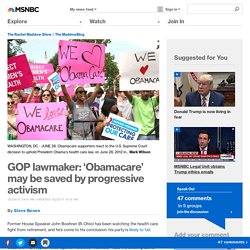 Speaking at a health care conference in Orlando this week, Boehner – who held dozens of ACA repeal votes against his better instincts – said the existing law is likely to remain largely intact, despite Republican dominance. “Most of the framework of the Affordable Care Act,” he said, “that’s going to be there.” The former Speaker added that his party will continue to struggle to agree among themselves on an alternative, and conceded many of the reform law’s most popular provisions are now likely irreversible. 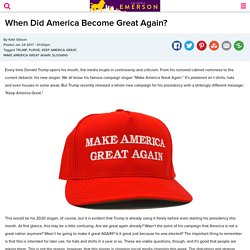 From his rumored cabinet nominees to the current debacle: his new slogan. We all know his famous campaign slogan “Make America Great Again.” It’s plastered on t-shirts, hats and even houses in some areas. Untitled.