Yet plagues of anxiety, stress, depression, social phobia, eating disorders, self-harm and loneliness now strike people down all over the world. The latest, catastrophic figures for children’s mental health in England reflect a global crisis. From Gigi Hadid to emoji fashion – New York fashion week is looking to the future. Diane Von Furstenberg bowed out of the limelight at her own brand this weekend, ceding centre stage to the newly hired designer Jonathan Saunders. 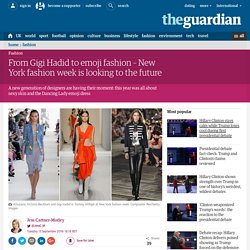 Donna Karan was at the DKNY show, but sedately on the front row rather than strutting the catwalk, after her retirement last year. The great houses of Calvin Klein and Oscar de la Renta are both keeping a low profile, finding themselves between headline designers. Of the old guard, only Ralph Lauren’s name remains in lights this season. Visual merchandising in a digital era: Instagram-friendly. He store window; much like the old adage that eyes are the window to your soul, the store window has always been ‘window’ to soul of the retailer. 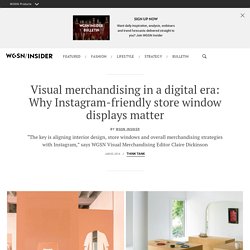 Peering in through the window, consumers can tell immediately what the brand/ retailer/ department store is all about. Consumer Protection in Retail: Weekly Roundup. How retailers are taking on mental health. Sick days and even sick pay are a widely accepted in the work place. 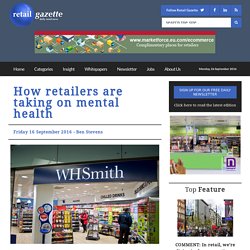 An average of 2.6 per cent of work time is spent in absence due to sickness, costing employers an estimated £16 billion a year. Brexit vote 'will not dent economy this year' as UK growth forecasts back to pre-referendum levels. China slowdown is global economy's biggest threat, Rogoff says. 26 Visual Merchandising Innovations. Sustainable design: Back to nature - Retail Focus - Retail Blog For Interior Design and Visual Merchandising. Details Created on Wednesday, 18 February 2015 11:36 18 Feb Written by Lyndsey Dennis There's an increasing pressure for retailers to do their part for the environment and adopt sustainable design practises. 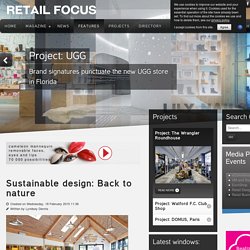 With the issue of sustainability at the forefront of many creatives' minds, many displays are now designed to be reused and adapted for future window schemes and in-store displays. The festive season showed a strong use of sustainable materials within windows and in-store displays. Creative agency HRG seeks to use sustainability materials and methods in all of its projects. Emma Dicks, insights director at HRG, says sustainability should be high on the agenda for brands and retailers: 'We can design and produce in a positively sustainable way, but if what we produce ends up in landfill, that positive intent is largely pointless. There can be the reservations that sustainable design can stifle creativity.

Fila floor protection systems at Gloucester Services. Visual Search Set to Make World of Imagery Instantly Shopable. LONDON, United Kingdom — From a perfect biker jacket that scrolls into view on Instagram to a striking floral printed top spotted in the street, the kind of visual inspiration that generates purchasing intent for fashion items is literally everywhere. 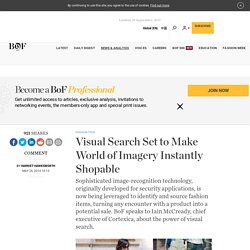 But the consumer journey from inspiration to transaction — identifying, locating and ultimately buying the item of interest — has traditionally been fragmented and full of friction. Now, visual search technology, leveraging sophisticated algorithms originally developed for security applications, promises to radically shorten the path from inspiration to transaction, allowing anyone with a smartphone to immediately identify and purchase the products they encounter — online, or in the physical world.

In recent years, a range of start-ups, including ASAP54, Snap Fashion, Slyce and Style-Eyes, have tapped the promise of visual search to launch “Shazam for fashion” apps. But so far no single service dominates the space. PixelFLEX Featured in the “Store of the Future” with GAIAM at Macy’s. As a leading lifestyle brand focused on making yoga and fitness accessible for everyone, Gaiam currently has a worldwide network of approximately 38,000 retail environments with 18,000 of those located within existing retail locations. 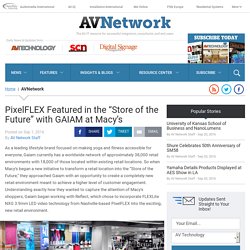 So when Macy’s began a new initiative to transform a retail location into the “Store of the Future,” they approached Gaiam with an opportunity to create a completely new retail environment meant to achieve a higher level of customer engagement. Understanding exactly how they wanted to capture the attention of Macy’s shoppers, Gaiam began working with Reflect, which chose to incorporate FLEXLite NXG 3.9mm LED video technology from Nashville-based PixelFLEX into the exciting, new retail environment.

4 Reasons Why Mobile Is the Future of Retail. Retail is an industry experiencing rapid changes, with big players trying to improve delivery times. 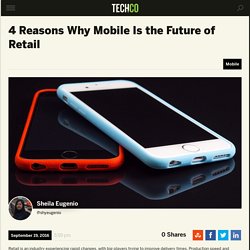 Production speed and countless other factors to satisfy consumers with evolving needs and lifestyles. While brick and mortar companies work to develop new channels to connect with their consumers, and online stores seek larger audiences, a group of newcomers are driving a shift away from traditional operations in an effort to capitalize on the mobile revolution. An increasing number of them bypass stores and the web entirely by starting as an app. Here are the top reasons mobile is shaping the future of retail. 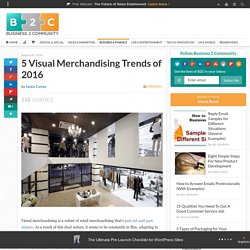