The Psychology of a teenager's sense of identity through adolescence

Being a Youth Worker in a local centre allows one to view the potential in youths of Singapore. Youths in adolescence go through critical periods that are crucial in the beginning of their strive to discover and establish a perception of their "identity".

Youths are more self-aware of themselves and will question themselves in many ways that may affect their future growth. Active participation and behaviour from parents is needed to instil positive environments and support for a healthy child growth.

We will be exploring how and why this phenomenon is applied by Youths in Adolescences; and dwelling deeper into Erikson's Psychosocial Development Theory and the Stage of Adolescence of youths to measure the proper parenting methods. Identity vs. Role Confusion in Erikson's Theory. Identity versus confusion is the fifth stage of ego according to psychologist Erik Erikson's theory of psychosocial development. 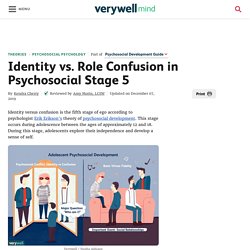 This stage occurs during adolescence between the ages of approximately 12 and 18. During this stage, adolescents explore their independence and develop a sense of self. According to Erikson, people progress through a series of stages as they grow and change throughout life. During each stage, people face a developmental conflict that must be resolved to successfully develop the primary virtue of that stage. He was interested in how social interaction and relationships affect development and growth. Article of Identity vs Role Confusion in Erikson's Theory. Identity Development Theory. Identity Development Theory A well-developed identity is comprised of goals, values, and beliefs to which a person is committed. It is the awareness of the consistency in self over time, the recognition of this consistency by others (Erikson, 1980). 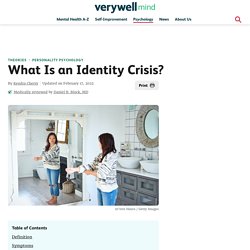 An identity crisis is a developmental event that involves a person questioning their sense of self or place in the world. The concept originates in the work of developmental psychologist Erik Erikson, who believed that the formation of identity was one of the most important conflicts that people face. According to Erikson, an identity crisis is a time of intensive analysis and exploration of different ways of looking at oneself. While developing a sense of identity is an important part of the teenage years, Erikson did not believe that the formation and growth of identity were confined to adolescence only. Instead, identity is something that shifts and changes throughout life as people confront new challenges and tackle different experiences. Article of How identity is formed from Identity Crisis.

Erikson’s Epigenetic Theories in Adolescence. Psychology into adulthood Taq1 – look at cross cultural studies of life stages are these reliable and valid? 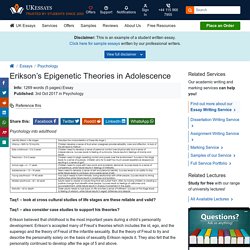 Taq1 – also consider case studies to support his theories? Erikson believed that childhood is the most important years during a child’s personality development. Erikson’s accepted many of Freud’s theories which includes the id, ego, and the superego and the theory of Freud of the infantile sexuality. But the theory of Freud to try and describe the personality solely on the basis of sexuality Erikson rejects it. Article on Erikson's Epigenetic Theories in Adolescence. Why Is Teen Identity Development Important? Though it can be hard for parents to let go and acknowledge their teen needs external help, a credible adventure therapy program can relatively quickly and positively change your son or daughter’s life for the better. 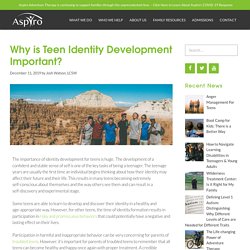 Psychologist Erik Erikson advocated that teen identity development is fostered by experiences that allow individuals to express their individuality and receive feedback and validation from others. Adventure therapy programs provide experiences that promote healthier relationships and positive identity formation in teens.

A credible adventure therapy program can also positively affect a teen’s self-perception, confidence, and leadership skills by providing unique experiences and challenging opportunities that develop competence and confidence from within. Article of Importance of a Teen's Identity.