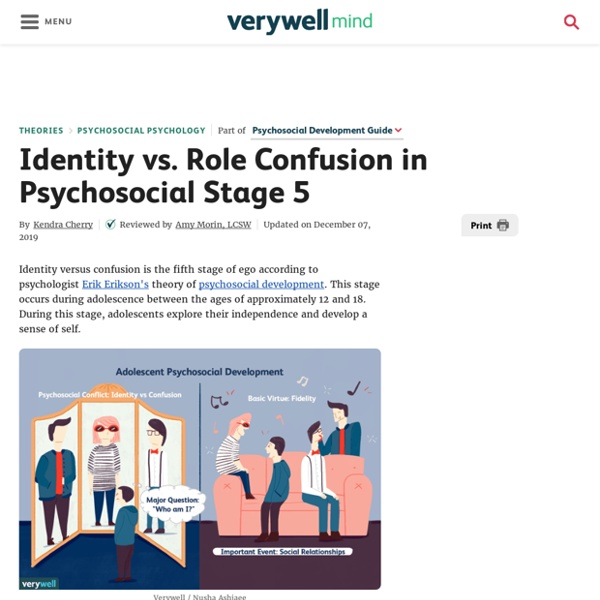 Identity versus confusion is the fifth stage of ego according to psychologist Erik Erikson's theory of psychosocial development. This stage occurs during adolescence between the ages of approximately 12 and 18. During this stage, adolescents explore their independence and develop a sense of self. According to Erikson, people progress through a series of stages as they grow and change throughout life. During each stage, people face a developmental conflict that must be resolved to successfully develop the primary virtue of that stage. He was interested in how social interaction and relationships affect development and growth. Overview Psychosocial Conflict: Identity Versus ConfusionMajor Question: "Who am I?" What Is Ego Identity? One of the main elements of Erikson's psychosocial stage theory is the development of ego identity. During the identity versus confusion stage, the conflict is centered on developing a personal identity. Development During the Adolescent Years

Erikson's Stages of Psychosocial Development Erik Erikson was an ego psychologist who developed one of the most popular and influential theories of development. While his theory was impacted by psychoanalyst Sigmund Freud's work, Erikson's theory centered on psychosocial development rather than psychosexual development. The stages that make up his theory are as follows:1

Why Your Self-Identity is Important In the previous article, “What Is Your Self-Identity,” we defined and got to the heart of what a person’s self-identity is. In this article we are going to find out why knowing your self-identity is important. Knowing who we really are plays a key role in how we think, how we feel, and how we actually go about our day to day lives. Without knowing our personal identity we are much like a rudderless ship drifting aimlessly on the ocean, subject to the whims of the tides and winds. Erikson’s 8 Stages of Psychosocial Development Erik Erikson (1902–1994) was a stage theorist who took Freud’s controversial theory of psychosexual development and modified it as a psychosocial theory. Erikson emphasized that the ego makes positive contributions to development by mastering attitudes, ideas, and skills at each stage of development. This mastery helps children grow into successful, contributing members of society. During each of Erikson’s eight stages, there is a psychological conflict that must be successfully overcome in order for a child to develop into a healthy, well-adjusted adult.

The 12 Stages of Life The Twelve Stages of the Human Life Cycle Which stage of life is the most important? Some might claim that infancy is the key stage, when a baby’s brain is wide open to new experiences that will influence all the rest of its later life. James Marcia and Self-Identity - Child Development Theory: Adolescence (12-24) James Marcia is another influential theorist who expanded upon Erikson's concept of identity crisis and identity confusion. His initial work was published during the 1960's but his theory continues to be refined in accordance with recent research findings. Although Marcia's theory originally conceptualized identity development in terms of a progressive developmental trend, his theory has subsequently become more descriptive and categorical, defining and identifying particular configurations of identity exploration and commitment.

Changes throughout adolescence (Physical & Cognitive) Learning Objectives Summarize the physical and cognitive changes that occur for boys and girls during adolescence.Explain how adolescents develop a sense of morality and of self-identity. Adolescence is defined as the years between the onset of puberty and the beginning of adulthood. In the past, when people were likely to marry in their early 20s or younger, this period might have lasted only 10 years or less — starting roughly between ages 12 and 13 and ending by age 20, at which time the child got a job or went to work on the family farm, married, and started his or her own family. Today, children mature more slowly, move away from home at later ages, and maintain ties with their parents longer.

Adolescent Identity Development - Adolescence - ACT for Youth The development of a strong and stable sense of self is widely considered to be one of the central tasks of adolescence [1]. Despite the fact that identity development occurs throughout one's lifetime, adolescence is the first time that individuals begin to think about how our identity may affect our lives [2]. During adolescence, we are much more self-conscious about our changing identities than at any other stage in our lives [3]. Visit Toolkit: Identity Development for resources. Learn more about Adolescent Development.

What Is Identity Diffusion? Definition and Examples Individuals in identity diffusion haven’t committed to any path for their futures, including occupational and ideological, and aren’t attempting to develop a path. Identity diffusion is one of four identity statuses defined by psychologist James Marcia in the 1960s. Generally speaking, identity diffusion takes place during adolescence, a period when people are working to form their identities, but it can continue into adulthood. Key Takeaways: Identity Diffusion Identity diffusion occurs when an individual hasn’t committed to an identity and isn’t working to form one.Many people experience, and eventually grow out of, a period of identity diffusion in childhood or early adolescence. The Advantages of Punishing Children for Bad Behavior Punishing children who misbehave is not an easy or welcome task for parents. Kids Health encourages parents to maintain a consistent discipline plan in order to promote good behavior in their children. The type of punishment and consequences will vary according to the age of the child, says Kids Health, but there are some key advantages that apply to children of any age. This video file cannot be played.(Error Code: 102630)

James Marcia's Identity Theory: Understanding Adolescents' Search For Identity Videos, quizzes & homework help Watch 5 minute video clips, get step by step explanations, take practice quizzes and tests to master any topic. Did you know? Study.com has a library of 550,000 questions and answers for covering your toughest textbook problems Students love Study.com Five Ways to Help Teens Feel Good about Themselves No one wants to hang out with me. I’m a failure at school. All my other friends seem happy. What’s wrong with me?