How does an adolescent form his/her identity? 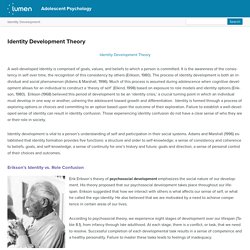 It is the awareness of the consistency in self over time, the recognition of this consistency by others (Erikson, 1980). The process of identity development is both an individual and social phenomenon (Adams & Marshall, 1996). Much of this process is assumed during adolescence when cognitive development allows for an individual to construct a ‘theory of self’ (Elkind, 1998) based on exposure to role models and identity options (Erikson, 1980). Erikson (1968) believed this period of development to be an ‘identity crisis,’ a crucial turning point in which an individual must develop in one way or another, ushering the adolescent toward growth and differentiation. Identity development is vital to a person’s understanding of self and participation in their social systems. Erikson’s Identity vs. Figure 8.3.1. Table 8.3.1. Video 8.3.1. Insta Identity : the Construction of Identity through Instagram.

Learning Identity A Sociocultural Perspective. SAGE Journals: Your gateway to world-class journal research. Wahl Scholl 1e Ch3. Literacy and Identity Examining the Metaphors in History and Contemporary Research. Readers Identity How Identity and Literacy Can Work Together fo. My identity is a superpower. Adolescent Identity Development - Adolescence - ACT for Youth.

The development of a strong and stable sense of self is widely considered to be one of the central tasks of adolescence [1]. 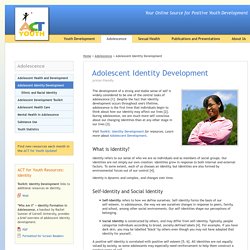 Despite the fact that identity development occurs throughout one's lifetime, adolescence is the first time that individuals begin to think about how our identity may affect our lives [2]. During adolescence, we are much more self-conscious about our changing identities than at any other stage in our lives [3]. Visit Toolkit: Identity Development for resources. Learn more about Adolescent Development. 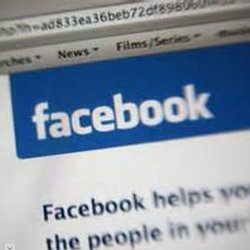 What teens don’t see is how much of an impact it has on their self-esteem. In today’s social networking, teens are worried about how many “likes” they can get, how many followers they gain and how many retweets they have, even though none of it matters. “Social media creates an environment where disordered thoughts and behaviors really thrive,” The Dove Self-Esteem Project says. Frankly, it’s getting even worse considering the negative effects of social networking are already impacting the generations before us. Without a lot of “likes,” followers, or retweets, teens see themselves as “not good enough.” Teens are constantly exposed to seeing this “perfect image” of who they should be, all provided by social media.

They feel if they can’t become that “perfect image,” then they’re not good enough for anyone or themselves. However, social media doesn’t have the intentions or ruining lives. Selfie-Esteem: The Relationship Between Body Dissatisfaction and Social Media in Adolescent and Young Women. Social media platforms like Instagram and Facebook have become ingrained in the lives of countless individuals. 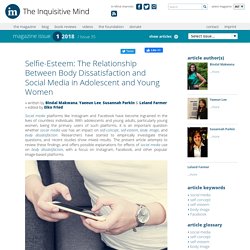 With adolescents and young adults, particularly young women, being the primary users of such platforms, it is an important question whether social media use has an impact on self-concept, self-esteem, body image, and body dissatisfaction. Researchers have started to empirically investigate these questions, and recent studies show mixed results. The present article attempts to review these findings and offers possible explanations for effects of social media use on body dissatisfaction, with a focus on Instagram, Facebook, and other popular image-based platforms. “Social media is not real life,” stated Essena O’Neill, a 19-year-old Australian Internet star who quit social media in November of 2015 to prove the point that social media is just a means of fake self-promotion. The Neuroscience of Identity. By Nicklas Balboa and Richard D. 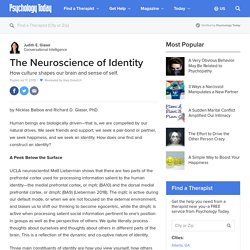 Glaser, PhD Human beings are biologically driven—that is, we are compelled by our natural drives. We seek friends and support, we seek a pair-bond or partner, we seek happiness, and we seek an identity. How does one find and construct an identity? A Peek Below the Surface article continues after advertisement UCLA neuroscientist Matt Lieberman shows that there are two parts of the prefrontal cortex used for processing information salient to the human identity—the medial prefrontal cortex, or mpfc (BA10) and the dorsal medial prefrontal cortex, or dmpfc (BA9) (Lieberman 2018). Religious Identity Formation Among Adolescents The Role of Relig. FAMILY DIVERSITY PROJECTS. Identity. Identity and Individuality: Exploring Art & Literature.

Learning Objectives Students will: Build a vocabulary for students to use when focusing on the dilemma of decision-making Analyze how their environment informs the ways in which they interact with the world Analyze examples of art and literature which depict the struggle between individual identity and the larger society. 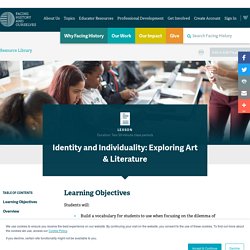 Overview This lesson outline explores the work of Glenn Ligon and Zora Neale Hurston in order to examine complicated questions about their own identity and how they are perceived by others. Readings and resources from Choosing to Participate are used to help students make the connection between issues of identity and decision making. Context While this lesson requires little historical context, it is necessary to place its core ideas within the context of American history. Materials Readings: Little Things Are Big How It Feels to Be Colored Me Images It may be helpful to print these images out, or make overhead transparencies for classroom use. Activities Assessment Extensions. Teaching Issues of Identity Through Multicultural Young Adult Lit.