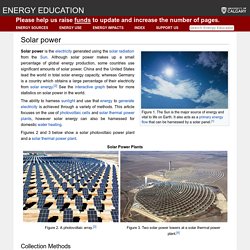 The Sun is the major source of energy and vital to life on Earth. Solar - Energy Kids: U.S. Energy Information Administration (EIA) Energy from the sun The sun has produced energy for billions of years and is the ultimate source for all of the energy sources and fuels that we use today. 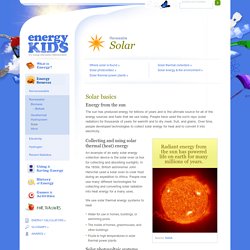 People have used the sun's rays (solar radiation) for thousands of years for warmth and to dry meat, fruit, and grains. Over time, people developed technologies to collect solar energy for heat and to convert it into electricity. Radiant energy from the sun has powered life on earth for many millions of years. Renewable energy future. Photovoltaics and electricity.

Solar Cells: Everything to Know About Photovoltaics. Reading Time: 4 minutes. 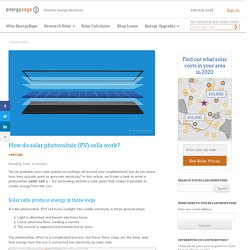 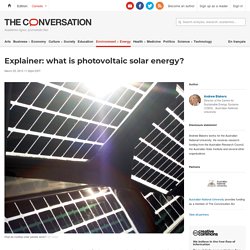 Solar PV is the rooftop solar you see on homes and businesses - it produces electricity from solar energy directly. Solar thermal technologies use the sun’s energy to generate heat, and electricity is generated from that. Australia receives thousands of times more solar energy from the sun each year than all fossil fuel use combined.

We directly use only about one millionth of this at the moment as commercial energy. How it works. How do Photovoltaics Work? By Gil Knier back to the Science@NASA story "The Edge of Sunshine" Photovoltaics is the direct conversion of light into electricity at the atomic level. 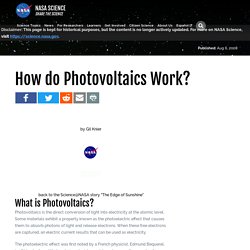 Some materials exhibit a property known as the photoelectric effect that causes them to absorb photons of light and release electrons. When these free electrons are captured, an electric current results that can be used as electricity. The photoelectric effect was first noted by a French physicist, Edmund Bequerel, in 1839, who found that certain materials would produce small amounts of electric current when exposed to light. The diagram above illustrates the operation of a basic photovoltaic cell, also called a solar cell. How Do Photovoltaic Cells Convert Sunlight into Electricity? By Rik DeGunther Solar energy is leading the green revolution. 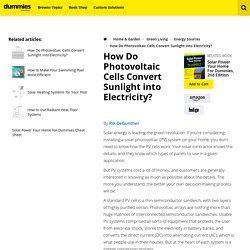 If you’re considering installing a solar photovoltaic (PV) system on your home, you don’t need to know how the PV cells work. Your solar contractor knows the details, and they know which types of panels to use in a given application. But PV systems cost a lot of money, and customers are generally interested in knowing as much as possible about the details. The more you understand, the better your own decision-making process will be. A standard PV cell is a thin semiconductor sandwich, with two layers of highly purified silicon. How do solar cells work? What are solar cells? 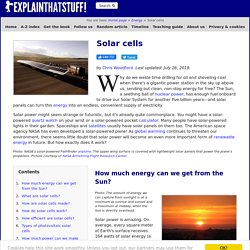 A solar cell is an electronic device that catches sunlight and turns it directly into electricity. It's about the size of an adult's palm, octagonal in shape, and colored bluish black. Solar cells are often bundled together to make larger units called solar modules, themselves coupled into even bigger units known as solar panels (the black- or blue-tinted slabs you see on people's homes—typically with several hundred individual solar cells per roof) or chopped into chips (to provide power for small gadgets like pocket calculators and digital watches). Photo: The roof of this house is covered with 16 solar panels, each made up of a grid of 10×6 = 60 small solar cells. On a good day, it probably generates about 4 kilowatts of electricity. Solar energy - Australian Renewable Energy Agency (ARENA) The Future of Solar is Bright.

By Emily Kerr figures by Abagail Burrus The Sun emits enough power onto Earth each second to satisfy the entire human energy demand for over two hours. 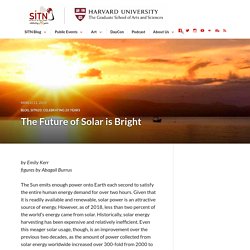 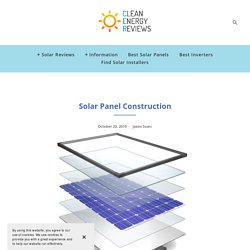 This is supported by multiple detailed studies and life-cycle analysis. However, many of the studies are now outdated as solar PV cell efficiency has increased from 15% to 20% (a 35% increase) over the last few years, and payback time is estimated to be as low as 1.5 years. Australian researchers smash efficiency record for ‘tandem solar cells' Researchers at the Australian National University set a new efficiency world record for ‘tandem solar cells’, which stack two different types of solar modules on top of each other to achieve dramatic increases in performance. 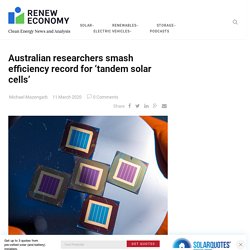 The researchers believe that the layering of multiple types of solar cells to achieve higher efficiencies could be on the cusp of becoming commercially viable, and commonplace within the next few years. The research led by a team at the ANU in Canberra started with a conventional silicon solar cell, which is commonly used in most solar panels currently available on the market. On top of the silicon wafer, the researchers successfully layered a perovskite solar cell, which is produced using organic and inorganic materials, rather than silicon wafers, to convert sunlight into electricity. The two layers are then able to absorb different parts of the light spectrum, maximising the amount of sunlight which is converted into electricity. How Efficient Are Solar Panels? (2020) Which Factors Determine Solar Panel Efficiency? Solar panels are usually able to process 15% to 22% of solar energy into usable energy, depending on factors like placement, orientation, weather conditions, and similar.

The amount of sunlight that solar panel systems are able to convert into actual electricity is called performance, and the outcome determines the solar panel efficiency. To determine solar panel efficiency, panels are tested at Standard Test Conditions (STC). STC specifies a temperature of 25°C and an irradiance of 1,000 W/m2. This is the equivalent of a sunny day with the incident light hitting a sun-facing 37°-tilted surface. Apart from the standard test conditions, solar panels are extensively tested for performance in extreme conditions. Next-generation solar panels boost efficiency but may carry toxic risks. As our planet races towards a climate emergency, there is hope from some people that renewable energy will come to the rescue. Solar photovoltaic (PV) technology has evolved steadily since it was first developed by Bell Labs in 1954. It is now scalable, easily integrated with other energy technologies including batteries, and the cost of modules (commonly known as panels) has decreased by 80 per cent since 2009.

Decades of improvements in engineering and manufacturing processes have led to moderately efficient, low environmental impact, silicon-based crystalline solar modules that fill rooftops and fields around the world. This is all about to change with new technology based on manufacturing techniques that use more toxic chemicals, including nanomaterials. Next-generation solar modules offer a lot of potential but might be more toxic than we expect. Price and efficiency of solar panels has changed over time. How was Solar Power Discovered? The first major breakthrough in solar power was made by a 19-year-old Alexandre-Edmond Becquerel in 1839.

During an experiment, Becquerel discovered that silver chloride could generate voltage and current when exposed to light under the right conditions. His discovery became known as the photovoltaic effect, or, alternatively, the Becquerel effect. It was this same discovery that provided the basis for the development of the first solar cell in 1888 by Aleksandr Stoletov. How did the Technology Progress? Solar power remained relatively obscure until a 1904 paper by Albert Einstein brought the attention of the American scientific community to the photoelectric effect described by Stoletov. Over 50 years later, Bell Laboratories would go on to develop the first modern photovoltaic cell. Panel Efficiency. You may hear the term “efficiency” thrown around a lot when reading up on solar panels. Solar Energy News. On the Road to Non-Toxic and Stable Perovskite Solar Cells May 11, 2020 — The promising halide perovskite materials for solar energy conversion show high efficiencies, but this comes at a cost: The best perovskite materials incorporate toxic lead which poses a hazard to ... read more New Discovery Settles Long-Standing Debate About Photovoltaic Materials Apr. 17, 2020 — Scientists have theorized that organometallic halide perovskites -- a class of light harvesting 'wonder' materials for applications in solar cells and quantum electronics -- are so ... read more.

Solar Research. Scientists set new solar power efficiency record at almost 50 per cent. After 40 Years of Searching, Scientists Identify The Key Flaw in Solar Panel Efficiency. Solar panels are fantastic pieces of technology, but we need to work out how to make them even more efficient – and scientists just solved a 40-year-old mystery around one of the key obstacles to increased efficiency. A new study outlines a material defect in silicon used to produce solar cells that has previously gone undetected. Basics of Solar Electricity: Photovoltaics (PV) An Introduction to solar cell technology. A Practical Guide to PV Efficiency: GSES PV efficiency. Future of Solar PV 2019: IRENA.