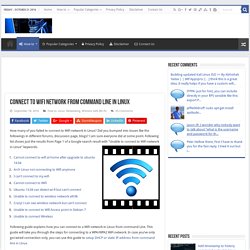 Did you bumped into issues like the followings in different forums, discussion page, blogs? I am sure everyone did at some point. Following list shows just the results from Page 1 of a Google search result with “Unable to connect to WiFi network in Linux” keywords. Following guide explains how you can connect to a WiFi network in Linux from command Line. This guide will take you through the steps for connecting to a WPA/WPA2 WiFi network. WiFi network from command line – Required tools Following tools are required to connect to WiFi network in Linux from command line Before we jump into technical jargons let’s just quickly go over each item at a time. Wireless network configuration. Configuring wireless is a two-part process; the first part is to identify and ensure the correct driver for your wireless device is installed (they are available on the installation media, but often have to be installed explicitly), and to configure the interface. 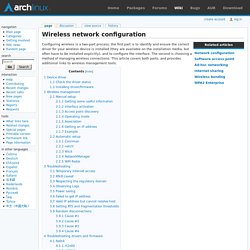 The second is choosing a method of managing wireless connections. This article covers both parts, and provides additional links to wireless management tools. Device driver The default Arch Linux kernel is modular, meaning many of the drivers for machine hardware reside on the hard drive and are available as modules. At boot, udev takes an inventory of your hardware and loads appropriate modules (drivers) for your corresponding hardware, which will in turn allow creation of a network interface. Some wireless chipsets also require firmware, in addition to a corresponding driver. Note: Udev is not perfect. Check the driver status. Wi-Fi on the Command Line. More people than ever are using wireless networks as their primary networking medium. 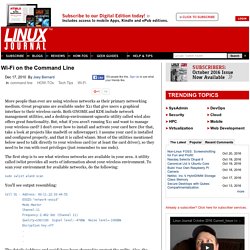 Great programs are available under X11 that give users a graphical interface to their wireless cards. Both GNOME and KDE include network management utilities, and a desktop-environment-agnostic utility called wicd also offers great functionality. But, what if you aren't running X11 and want to manage your wireless card? I don't cover how to install and activate your card here (for that, take a look at projects like madwifi or ndiswrapper). How to connect to a WPA/WPA2 WiFi network using Linux command line. This is a step-to-step guide for connecting to a WPA/WPA2 WiFi network via the Linux command line interface. 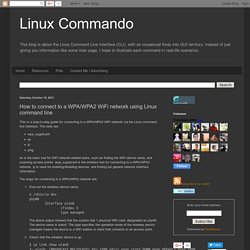 The tools are: wpa_supplicantiw ip ping iw is the basic tool for WiFi network-related tasks, such as finding the WiFi device name, and scanning access points. wpa_supplicant is the wireless tool for connecting to a WPA/WPA2 network. ip is used for enabling/disabling devices, and finding out general network interface information. The steps for connecting to a WPA/WPA2 network are: Find out the wireless device name. $ /sbin/iw dev phy#0 Interface wlan0 ifindex 3 type managed The above output showed that the system has 1 physical WiFi card, designated as phy#0. 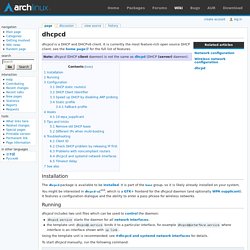 It is currently the most feature-rich open source DHCP client, see the home page for the full list of features. Note: dhcpcd (DHCP client daemon) is not the same as dhcpd (DHCP (server) daemon). Installation The dhcpcd package is available to be installed. It is part of the base group, so it is likely already installed on your system. You might be interested in dhcpcd-uiAUR, which is a GTK+ frontend for the dhcpcd daemon (and optionally WPA supplicant). Running dhcpcd includes two unit files which can be used to control the daemon: dhcpcd.service starts the daemon for all network interfaces; the template unit dhcpcd@.service binds it to a particular interface, for example dhcpcd@interface.service where interface is an interface shown with ip link. Using the template unit is recommended; see #dhcpcd and systemd network interfaces for details. To start dhcpcd manually, run the following command: 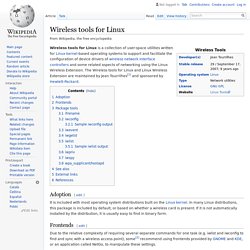 The Wireless tools for Linux and Linux Wireless Extension are maintained by Jean Tourrilhes[1] and sponsored by Hewlett-Packard. Adoption[edit] It is included with most operating system distributions built on the Linux kernel. In many Linux distributions, this package is included by default, or based on whether a wireless card is present. If it is not automatically installed by the distribution, it is usually easy to find in binary form. Frontends[edit] Package tools[edit] ifrename[edit] Risolvere i problemi Wi-fi. 802.1 LAN/MAN. Wireless (Puppylinux) Wireless Communication. Ethernet (linux link layer) Link Layer (Linux & Unix) Networking (Unix & Linux) Unix & Linux.