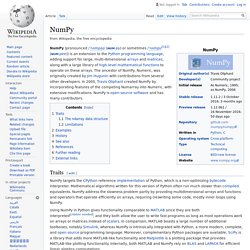 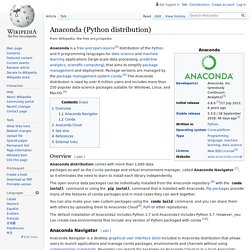 Navigator can search for packages on Anaconda Cloud or in a local Anaconda Repository, install them in an environment, run the packages and update them. It is available for Windows, macOS and Linux. Navigator is automatically included with Anaconda version 4.0.0 or higher. Anaconda Cloud is a package management service by Anaconda where you can find, access, store and share public and private notebooks, environments, and conda and PyPI packages. NVIDIA Developer. The NVIDIA CUDA® Deep Neural Network library (cuDNN) is a GPU-accelerated library of primitives for deep neural networks. cuDNN provides highly tuned implementations for standard routines such as forward and backward convolution, pooling, normalization, and activation layers. cuDNN is part of the NVIDIA Deep Learning SDK. 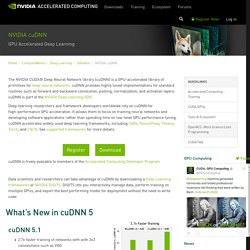 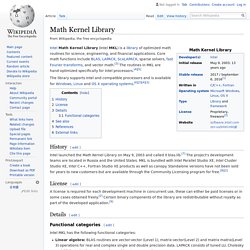 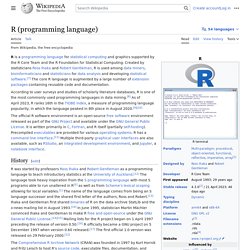 If a user types 2+2 at the R command prompt and presses enter, the computer replies with 4, as shown below: This calculation is interpreted as the sum of two single-element vectors, resulting in a single-element vector. The prefix [1] indicates that the list of elements following it on the same line starts with the first element of the vector (a feature that is useful when the output extends over multiple lines). HomePage. CMake - Wikipedia. Features[edit] CMake can handle in-place and out-of-place builds, enabling several builds from the same source tree, and cross-compilation. 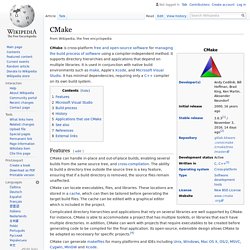 The ability to build a directory tree outside the source tree is a key feature, ensuring that if a build directory is removed, the source files remain unaffected. Complicated directory hierarchies and applications that rely on several libraries are well supported by CMake. For instance, CMake is able to accommodate a project that has multiple toolkits, or libraries that each have multiple directories. In addition, CMake can work with projects that require executables to be created before generating code to be compiled for the final application. CMake can generate makefiles for many platforms and IDEs including Unix, Windows, Mac OS X, OS/2, MSVC, Cygwin, MinGW and Xcode. 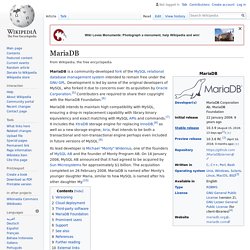 On 16 January 2008, MySQL AB announced that it had agreed to be acquired by Sun Microsystems for approximately $1 billion. The acquisition completed on 26 February 2008. ZeroNet. The ZeroNet website and bittorrent tracker are blocked in China.[6] As of 2016[update] there is no way to take down a ZeroNet page which still has seeders,[1] thus making such pages immune to third-party methods of taking them down, including DMCA takedown notices.[9] By default, sites have a size limit of 10 megabytes, but users may grant a site permission to use more storage space if they wish. 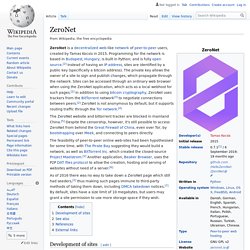 Development of sites[edit] Sites on ZeroNet are known as "zites" by its users. ZeroNet supports HTML, CSS and JavaScript. Site developers can also write sites in CoffeeScript instead of write in JavaScript, but they need to compile the .coffee files. Kernel-based Virtual Machine. Kernel-based Virtual Machine (KVM) is a virtualization module in the Linux kernel that allows the kernel to function as a hypervisor. 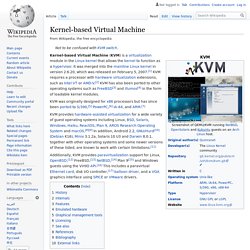 It was merged into the Linux kernel mainline in kernel version 2.6.20, which was released on February 5, 2007.[1] KVM requires a processor with hardware virtualization extensions, such as Intel VT or AMD-V.[2] KVM has also been ported to other operating systems such as FreeBSD[3] and illumos[4] in the form of loadable kernel modules. KVM was originally designed for x86 processors and has since been ported to S/390,[5] PowerPC,[6] IA-64, and ARM.[7] History[edit] Avi Kivity began the development of KVM in mid-2006 at Qumranet, a technology startup company[18] that was acquired by Red Hat in 2008.[19]

QEMU. QEMU (short for Quick Emulator) is a free and open-source hosted hypervisor that performs hardware virtualization (not to be confused with hardware-assisted virtualization). 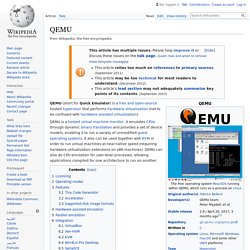 Practitioners requiring close to RPO zero and aggressive RTO SLAs should plan for an integrated data protection approach that effectively eliminates the concept of storage-led backup and shifts thinking to a application-led virtual point-in-time recovery model. The database and file system vendors will be the predominant suppliers of this technology, and understanding their roadmaps and commitment to support application-led recovery strategies is crucial to both database and data protection technology selection. Questions for #CxOChat: Communicating to Boards on Cyber Security The End of the Storage Industry As We Know It Realities of the New Infrastructure Stack Unpacking the Public Cloud Market.

ReFS. Maybe later Thank you! We will send you a reminder email. Dear readers in Canada, time is running out in 2016 to help Wikipedia. To protect our independence, we'll never run ads. We're sustained by donations averaging about $15. Virtualization, tools and tips. Sandstorm. Lifestream Blog. XxHash - Extremely fast non-cryptographic hash algorithm. Benchmarks The benchmark uses the Open-Source SMHasher program by Austin Appleby compiled with Visual C on Windows Seven 32-bits in single-thread mode. The reference system uses a Core 2 Duo @3.0GHz. Q.Score is a measure of quality of the hash function. It depends on successfully passing SMHasher test set. 10 is a perfect score.

The LSB is based on the POSIX specification, the Single UNIX Specification (SUS), and several other open standards, but extends them in certain areas. According to the LSB: Cloud Data Management Interface. Cloud Data Management Interface (CDMI) The Cloud Data Management Interface defines the functional interface that applications will use to create, retrieve, update and delete data elements from the Cloud. As part of this interface the client will be able to discover the capabilities of the cloud storage offering and use this interface to manage containers and the data that is placed in them. In addition, metadata can be set on containers and their contained data elements through this interface. Cockroach Labs. XFS Overview & Internals. Mikael Ronstrom. NuoDB. NuoDB is a database startup company based in Cambridge, Massachusetts. It sells a NewSQL database that works in the cloud. Aurora database analytics engine. Hgst/libzbc.

Architecture of Btrieve. Btrieve is a database developed by Pervasive. Main Page - Zen (microarchitecture) XFS. XFS is a high-performance 64-bit journaling file system created by Silicon Graphics, Inc (SGI) in 1993.[6] It was the default file system in the SGI's IRIX operating system starting with its version 5.3; the file system was ported to the Linux kernel in 2001. As of June 2014[update], XFS is supported by most Linux distributions, some of which use it as the default file system. Software.intel. TOP500. IBM System Blue Gene Solution. The Availability Experts. Bcache. Ceph/cbt. LTTng. LTTng: an open source tracing framework for Linux.