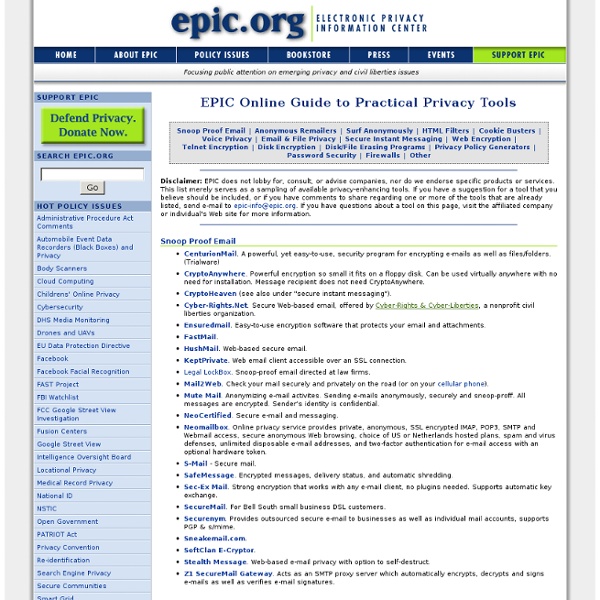 Disclaimer: EPIC does not lobby for, consult, or advise companies, nor do we endorse specific products or services. This list merely serves as a sampling of available privacy-enhancing tools. If you have a suggestion for a tool that you believe should be included, or if you have comments to share regarding one or more of the tools that are already listed, send e-mail to epic-info@epic.org. If you have questions about a tool on this page, visit the affiliated company or individual's Web site for more information. CD/USB Based Operating Systems Tails: live operating system that can run from removable media without leaving tracks. Internet Anonymizers, Virtual Private Networks (VPNs) and Proxy Servers Web Browser Ad-ons HTTPS Everywhere (Firefox, Chrome): forces HTTPS versions of websites were they are available. Search Engines DuckDuckGo: anonymous, encrypted web searches. ixquick: anonymous, encrypted web searches. Email/Communication Encryption Alternative Email Accounts Anonymous Remailers

‘NSA-Proof’ Email Service ‘ProtonMail’ by Harvard and MIT Students becomes massive success Necessity is the mother of invention, the old adage has proved its worth again when a group of Harvard and MIT students came together to create an NSA-proof email service. ProtonMail, the new email platform launched at European Organization for Nuclear Research (CERN) by five security experts ‘who were drawn together by a shared vision of a more secure and private Internet,’ is probably safer and secure than Lavabit, Snowden’s defunct email service. The service has many benefits over conventional email service providers. As the founders explain: They are incorporated in Switzerland, which is well known for offering the strongest privacy protection to both individuals as well as countries. The site uses end-to-end encryption and intense user authentication measures, implying that the data transmitted through their services is inaccessible to the ProtonMail team itself, let alone other people.

64 Things Every Geek Should Know « Caintech.co.uk If you consider yourself a geek, or aspire to the honor of geekhood, here’s an essential checklist of must-have geek skills. The term ‘geek’, once used to label a circus freak, has morphed in meaning over the years. What was once an unusual profession transferred into a word indicating social awkwardness. As time has gone on, the word has yet again morphed to indicate a new type of individual: someone who is obsessive over one (or more) particular subjects, whether it be science, photography, electronics, computers, media, or any other field. A geek is one who isn’t satisfied knowing only the surface facts, but instead has a visceral desire to learn everything possible about a particular subject. A techie geek is usually one who knows a little about everything, and is thus the person family and friends turn to whenever they have a question.

How to be anonymous online with Incognito At first glance Incognito may seem suited only for the extremely paranoid, because of the totality of tools it offers to hide your online presence. But those tools, each designed to mask a certain aspect of your online activity, have been around for quite a while. This 430MB-ish live CD has many faithful users, but I can't quote any on its usefulness since their identities couldn't be confirmed. How to Avoid Identity Theft Identity Theft is one of the worst things that can happen to your personal finances. When someone assumes your identity they can ruin your credit score and destroy your financial reputation for years. Identity theft is a growing crime, but there are some important measures you can take to avoid having your identity stolen. How to Avoid Identity Theft Online Shredding statements is always a good idea The Federal Trade Commission maintains an Identity Theft Awareness website that outlines three important steps for avoiding identity theft: Deter Identity Theft, Detect Identity Theft, and Defend Against Identity Theft.

5 Effective Tools to Encrypt Your Secret Files We now live in an age where everyone is watching everyone else, and everyone is reading each other’s emails, and opening each other’s files. This means that you need to pay closer attention than ever before towards encryption tools, and anything designed to protect your privacy. We obsess over online privacy, especially when Eddie and Glenn decided to reveal top-secret files to the world. Soda Machine Hack Most modern vending machines have little computers inside. A tiny screen usually displays some information. Although relatively little known, pressing a certain combinations of buttons can control the settings. For instance, you can check the internal temperature, view the amount of money inside, empty change, or dump certain beverages.

Low-Hassle Ways to Secure Your Computer System If time were no object, we’d all live a more secure computer life—we’d beef up our browsers, use complex passwords, and keep our data locked up with encryption Skynet couldn’t crack. But that kind of stuff requires obscure software, tricky command line work, and most of a free weekend, right? Nope. Anybody can feel more secure about their systems with the help of some free software and easy tweaks and add-ons. Secure Digital Secure Digital (SD) is a nonvolatile memory card used extensively in portable devices, such as mobile phones, digital cameras, GPS navigation devices, handheld consoles, and tablet computers. The Secure Digital standard was introduced in August 1999 as an evolutionary improvement over MultiMediaCards (MMC). The Secure Digital standard is maintained by the SD Association (SDA). SD technologies have been implemented in more than 400 brands across dozens of product categories and more than 8,000 models.[1] The Secure Digital format includes four card families available in three different form factors.