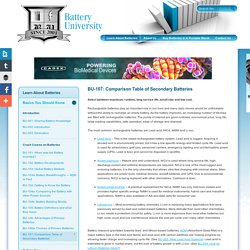 Rechargeable batteries play an important role in our lives and many daily chores would be unthinkable without the ability to recharge an empty battery. As the battery improves, an increasing number of devices are fitted with rechargeable batteries. The points of interest are good runtimes, economical price, long life, large loading capabilities, safe operation, ease of storage and disposal. Choices of Primary Batteries - Battery University. Knowing the difference in run-time performance Carbon-zinc, also known as the Leclanché battery, is one of the earliest and least expensive primary batteries. 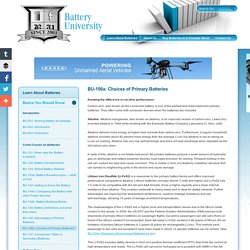 They often come with consumer devices when the batteries are included. Alkaline. Alkaline-manganese, also known as alkaline, is an improved version of carbon-zinc. Primary (non-rechargeable) Batteries. Appreciate the importance of non-rechargeable (primary) batteries. 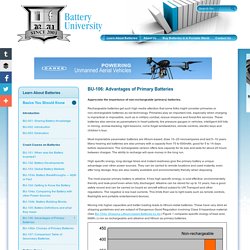 Rechargeable batteries get such high media attention that some folks might consider primaries or non-rechargeable batteries as old technology. Primaries play an important role, especially when charging is impractical or impossible, such as in military combat, rescue missions and forest-fire services. These batteries also service as pacemakers in heart patients, tire pressure gauges in vehicles, intelligent drill bits in mining, animal-tracking, light beacons, not to forget wristwatches, remote controls, electric keys and children’s toys. Most implantable pacemaker batteries are lithium-based; draw 10–20 microamperes and last 5–10 years. Many hearing aid batteries are also primary with a capacity from 70 to 600mAh, good for 5 to 14 days before replacement. Battery Definitions. Understand the differences in chemistries and ratings and how they apply. 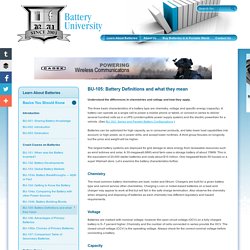 The three basic characteristics of a battery type are chemistry, voltage and specific energy (capacity). A battery can operate as a single cell to power a mobile phone or tablet, or connect in series to deliver several hundred volts as in a UPS (uninterruptible power supply system) and the electric powertrain for a vehicle. (See BU-302: Series and Parallel Battery Configurations.) BU-104b: Battery Building Blocks. Comparing the Battery with other Power Sources. Discover how the battery surpasses other power sources on readiness and efficiency but lacks on longevity and cost. 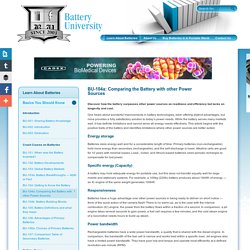 One hears about wonderful improvements in battery technologies, each offering distinct advantages, but none provides a fully satisfactory solution to today’s power needs. While the battery serves many markets well, it has definite limitations and cannot serve all energy needs effectively. This article begins with the positive traits of the battery and identifies limitations where other power sources are better suited. Energy storage Batteries store energy well and for a considerable length of time. Specific energy (Capacity) A battery may hold adequate energy for portable use, but this does not transfer equally well for large mobile and stationary systems. Responsiveness Batteries have a huge advantage over other power sources in being ready to deliver on short notice — think of the quick action of the camera flash! Power bandwidth Environment Efficiency Installation Maintenance. Getting to Know the Battery: Capabilities, Expectations & Limitations. Recognize the strength of the battery and learn how to live with its weakness. 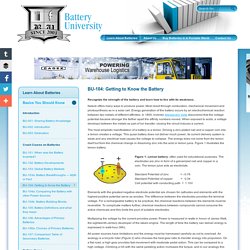 Nature offers many ways to produce power. Most result through combustion, mechanical movement and photosynthesis as in a solar cell. Energy generation of the battery occurs by an electrochemical reaction between two metals of different affinities. In 1800, inventor Alessandro Volta discovered that the voltage potential became stronger the farther apart the affinity numbers moved. When exposed to acids, a voltage develops between the metals as part of ion transfer; closing the circuit induces a current. 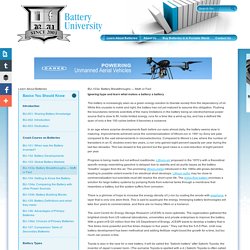 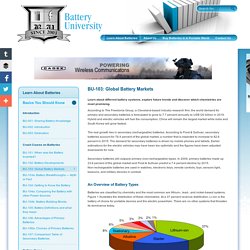 According to The Freedonia Group, a Cleveland-based industry research firm, the world demand for primary and secondary batteries is forecasted to grow to 7.7 percent annually to US$120 billion in 2019. Hybrid and electric vehicles will fuel the consumption; China will remain the largest market while India and South Korea will grow fastest. The real growth lies in secondary (rechargeable) batteries. According to Frost & Sullivan, secondary batteries account for 76.4 percent of the global market, a number that is expected to increase to 82.6 percent in 2015. Battery Historical Developments. Find out about battery development from the 1700s to today, and who is behind the inventions. 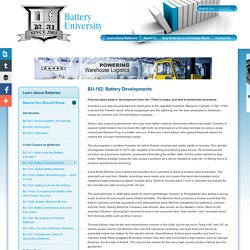 Inventions are well documented and credit goes to the dignified inventors. Benjamin Franklin (1706–1790) invented the Franklin stove, bifocal eyeglasses and the lightning rod. He was unequaled in American history as inventor until Thomas Edison emerged. Edison was a good businessman who may have taken credit for discoveries others had made. Contrary to popular belief, Edison did not invent the light bulb; he improved on a 50-year-old idea by using a small, carbonized filament lit up in a better vacuum. The phonograph is another invention for which Edison receives due credit, rightly or wrongly. It was Emile Berliner who initiated the transition from cylinders to discs to enable mass production. The gramophones in 1896 were made by machinist Eldridge Johnson in Philadelphia who added a spring motor to drive the previously hand-rotated turntable. Table 1: History of modern battery development. Information on the Invention of the Battery - Battery University.

Explore the earliest forms of batteries and the arrival of electricity. 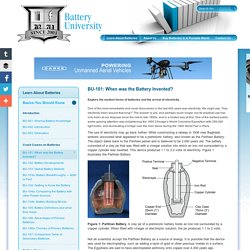 One of the most remarkable and novel discoveries in the last 400 years was electricity. We might ask, “Has electricity been around that long?” The answer is yes, and perhaps much longer, but its practical use has only been at our disposal since the mid to late 1800s, and in a limited way at first. One of the earliest public works gaining attention was enlightening the 1893 Chicago’s World Columbia Exposition with 250,000 light bulbs, and illuminating a bridge over the river Seine during the 1900 World Fair in Paris.

The use of electricity may go back further.