All About Battery Chargers. Discover which charger is best for your application A good charger provides the base for well-performing and durable batteries. 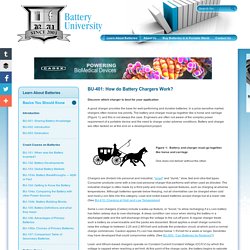 In a price-sensitive market, chargers often receive low priority. The battery and charger must go together like a horse and carriage (Figure 1), and this is not always the case. Engineers are often not aware of the complex power requirement of a portable device and the need to charge under adverse conditions. Fast and Ultra-fast Chargers - Battery University. 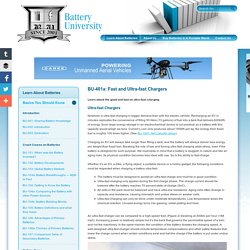 Recharging an EV in minutes replicates the convenience of filling 50 liters (13 gallons) of fuel into a tank that delivers 600kWh of energy. Such large energy storage in an electrochemical device is not practical as a battery with this capacity would weigh six tons. Current Li-ion only produces about 150Wh per kg; the energy from fossil fuel is roughly 100 times higher. Charles-Augustin de Coulomb's C-Rate for Batteries. Observe how the charge and discharge rates are scaled and why it matters. 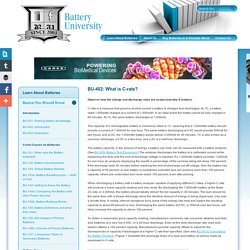 C-rate is a measure that governs at what current a battery is charged and discharged. At 1C, a battery rated 1,000mAh charges at a current of 1,000mAh. In an ideal world the battery would be fully charged in 60 minutes. At 1C, the same battery discharges at 1,000mA. The capacity of a rechargeable battery is commonly rated at 1C, meaning that a 1,000mAh battery should provide a current of 1,000mA for one hour. Charging Batteries at High and Low Temperatures. Learn how to extend battery life by moderating ambient temperatures. 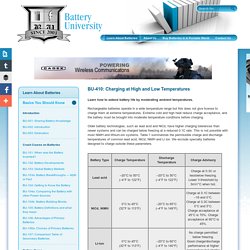 Rechargeable batteries operate in a wide temperature range but this does not give license to charge them at extreme temperatures.

Charging Batteries with a Power Supply. Learn how to charge a battery without a designated charger. 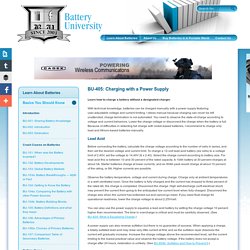 With technical knowledge, batteries can be charged manually with a power supply featuring user-adjustable voltage and current limiting. I stress manual because charging can never be left unattended; charge termination is not automated. You need to observe the state-of-charge according to voltage and current behaviors. Lower the charge voltage or disconnect the charge when the battery is full. Because of difficulties in detecting full charge with nickel-based batteries, I recommend to charge only lead and lithium-based batteries manually.

Before connecting the battery, calculate the charge voltage according to the number of cells in series, and then set the desired voltage and current limit. Lithium-ion charges similarly to lead acid and you can also use the power supply but exercise extra caution. Comments are intended for "commenting," an open discussion amongst site visitors. Comments On June 30, 2011 at 10:19am joel wrote: Charging Batteries with a Power Supply. BU-413a: Storing Renewable Energy in a Battery. Learn how to store renewable energy to bridge the energy gap. 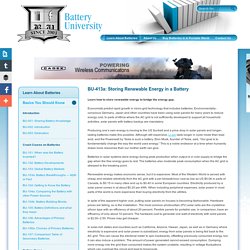 Economists predict rapid growth in micro-grid technology that includes batteries. Environmentally-conscious Germany, Japan and other countries have been using solar panels for many years to reduce energy cost. In parts of Africa where the AC grid is not sufficiently developed to support all household activities, solar panels with battery backup are mandatory. Producing one’s own energy is moving to the US Sunbelt and a price drop in solar panels and longer-lasting batteries make this possible. Although still expensive, Li-ion lasts longer in cycle mode than lead acid, and the Powerwall by Tesla is such a battery. Batteries in solar systems store energy during peak production when output is in over-supply to bridge the gap when the free energy goes to rest. Renewable energy makes economic sense, but it is expensive. In spite of the apparent higher cost, putting solar panels on houses is becoming fashionable.

Comments. Charging Batteries with Solar Power or a Wind Turbine - Battery University. Learn about charging your batteries from renewable resources and what it costs. 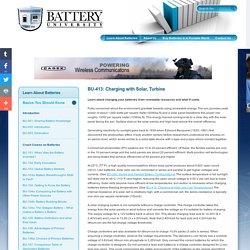 Folks concerned about the environment gravitate towards using renewable energy. The sun provides peak power of about 1,000 watts per square meter (93W/sq ft) and a solar panel transforms this power into roughly 130W per square meter (12W/sq ft). This energy harvest corresponds to a clear day with the solar panel facing the sun. Surface dust on the solar panels and high heat reduce the overall efficiency. Generating electricity by sunlight goes back to 1839 when Edmond Becquerel (1820–1891) first discovered the photovoltaic effect. Commercial photovoltaic (PV) systems are 10 to 20 percent efficient. At 25°C (77°F), a high quality monocrystalline silicon solar panel produces about 0.60V open circuit (OCV).

Charging Batteries Without Wires. Find out about energy loss and higher temperature when charging on a pad. 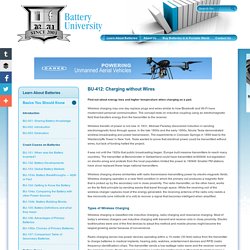 Wireless charging may one day replace plugs and wires similar to how Bluetooth and Wi-Fi have modernized personal communication. The concept rests on inductive coupling using an electromagnetic field that transfers energy from the transmitter to the receiver. Wireless transfer of power is not new. In 1831, Michael Faraday discovered induction in sending electromagnetic force through space. In the late 1800s and the early 1900s, Nicola Tesla demonstrated wireless broadcasting and power transmission.

It was not until the 1920s that public broadcasting began. Charging Batteries From a USB Port. Become familiar with the limitations when charging a battery with a USB charger. 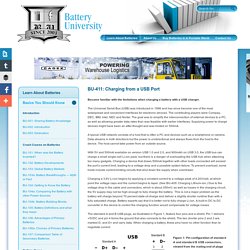 The Universal Serial Bus (USB) was introduced in 1996 and has since become one of the most widespread and convenient interfaces for electronic devices. The contributing players were Compaq, DEC, IBM, Intel, NEC and Nortel. The goal was to simplify the interconnection of external devices to a PC, as well as allowing greater data rates than was feasible with earlier interfaces. Battery as a Buffer to Assist the AC Power Supply. Charging Lithium-Ion Batteries. Find out how to prolong battery life by using correct charge methods. 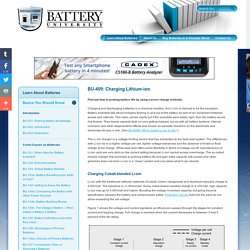 Charging and discharging batteries is a chemical reaction, but Li-ion is claimed to be the exception. Battery scientists talk about energies flowing in and out of the battery as part of ion movement between anode and cathode. This claim carries merits but if the scientists were totally right, then the battery would live forever. They blame capacity fade on ions getting trapped, but as with all battery systems, internal corrosion and other degenerative effects also known as parasitic reactions on the electrolyte and electrodes till play a role.

(See BU-808b: What causes Li-ion to die?.) The Li ion charger is a voltage-limiting device that has similarities to the lead acid system. Charging Nickel-Metal-Hydride Batteries. Know how to apply the correct charge to moderate heat and prevent overcharge. The charge algorithm for NiMH is similar to NiCd with the exception that NiMH is more complex. The NDV to detect full charge is faint, especially when charging at less than 0.5C. A mismatched or hot pack reduces the symptoms further. The NDV in a NiMH charger must respond to a voltage drop of 5mV per cell. This requires electronic filtering to compensate for noise and voltage fluctuations induced by the battery and the charger. Comments are intended for "commenting," an open discussion amongst site visitors.

If you have a question, require further information, have a suggestion or would like to report an error, use the "contact us" form or email us at: answers@cadex.com. Comments On May 3, 2011 at 6:50pm farhan wrote: On May 16, 2011 at 12:07pm JMD wrote: So.. what is the recommended C-rate for charging NiMH??? On September 9, 2011 at 9:11pm Edward wrote: On September 10, 2011 at 12:52am Peter den Hartog wrote: Charging Nickel-Cadmium Batteries. Charging (LED Acid Batteries) How to Charge Batteries. Explore what conditions are best when charging any battery. Batteries have unique requirements and Table 4-20 summarizes how to meet the needs with proper handling. Because of similarities within the battery family, only lead, nickel and lithium systems are listed.

Although each chemistry asks for a preferred treatment, there are common denominators that affect the life of all batteries. Charger Chips and Microcontrollers Information. Battery University BU-414: How do Charger Chips Work? Examine the difference between a charger chip and a microcontroller. When first introduced in the 1980s, charger chips simplified the design of NiCd and MiMH chargers, as these chemistries were difficult to charge.