Automotive Battery. Wet cell. Zamboni pile. Zamboni piles of more modern construction were manufactured as recently as the 1980s for providing the accelerating voltage for image intensifier tubes, particularly in military use. 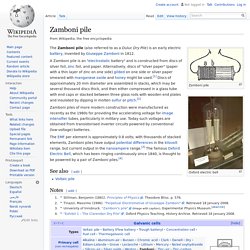 Today such voltages are obtained from transistorised inverter circuits powered by conventional (low-voltage) batteries. The EMF per element is approximately 0.8 volts; with thousands of stacked elements, Zamboni piles have output potential differences in the kilovolt range, but current output in the nanoampere range.[3] The famous Oxford Electric Bell, which has been ringing continuously since 1840, is thought to be powered by a pair of Zamboni piles.[4] See also[edit] Voltaic pile. Battery (electricity) An electric battery is a device consisting of two or more electrochemical cells that convert stored chemical energy into electrical energy. 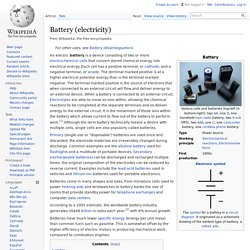 Button cell. Button, coin, or watch cells Devices using button cells are usually designed to use a cell giving a long service life, typically well over a year in continuous use in a wristwatch.

Most button cells have low self-discharge and hold their charge for a long time if not used. Thin film rechargeable lithium battery. Background[edit] Lithium-ion batteries are different from disposable lithium batteries because they have the ability to be recharged. 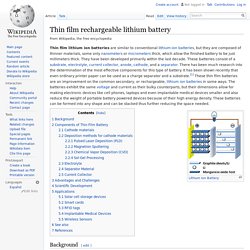 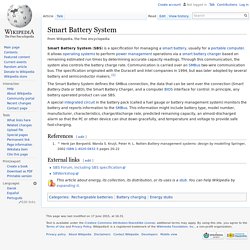 It allows operating systems to perform power management operations via a smart battery charger based on remaining estimated run times by determining accurate capacity readings. Through this communication, the system also controls the battery charge rate. Communication is carried over an SMBus two-wire communication bus. The specification originated with the Duracell and Intel companies in 1994, but was later adopted by several battery and semiconductor makers. [1] Photoflash battery. Photoflash cells were in production during the flashbulb era, and were slowly phased out as alkaline cells came into general usage. 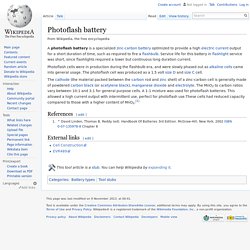 The photoflash cell was produced as a 1.5 volt size D and size C cell. The cathode (the material packed between the carbon rod and zinc shell) of a zinc-carbon cell is generally made of powdered carbon black (or acetylene black), manganese dioxide and electrolyte. The MnO2 to carbon ratios vary between 10:1 and 3:1 for general purpose cells. A 1:1 mixture was used for photoflash batteries. This allowed a high current output with intermittent use, perfect for photoflash use.These cells had reduced capacity compared to those with a higher content of MnO2.[1] Polaroid SX-70. The SX-70 is a folding single lens reflex Land camera which was produced by the Polaroid Corporation from 1972 to 1981. 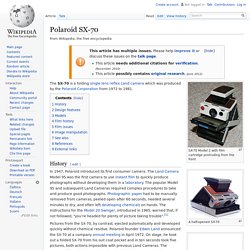 History[edit] In 1947, Polaroid introduced its first consumer camera. The Land Camera Model 95 was the first camera to use instant film to quickly produce photographs without developing them in a laboratory. The popular Model 95 and subsequent Land Cameras required complex procedures to take and produce good photographs. Photographic paper had to be manually removed from cameras, peeled open after 60 seconds, needed several minutes to dry, and often left developing chemicals on hands. Pictures from the SX-70, by contrast, ejected automatically and developed quickly without chemical residue. There were a variety of models beginning in 1972 with the original SX-70, though all shared the same basic design. The later Sonar OneStep (introduced in 1978[4]) and SLR 680 models were equipped with a sonar autofocus system. Design features[edit] Local battery. Lantern battery. 6 volt & 4.5 volt lantern batteries A lantern battery is a rectangular battery, typically an alkaline or zinc-carbon primary battery, used primarily in flashlights or lanterns. 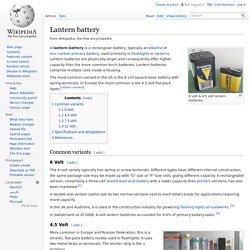 Lantern batteries are physically larger and consequently offer higher capacity than the more common torch batteries. Lantern batteries comprise multiple cells inside a housing. The most common variant in the US is the 6 volt square-base battery with spring terminals. Backup battery. A backup battery provides power to a system when the primary source of power is unavailable. 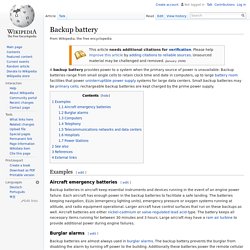 Backup batteries range from small single cells to retain clock time and date in computers, up to large battery room facilities that power uninterruptible power supply systems for large data centers. Flow battery. A typical flow battery consists of two tanks of liquids which are pumped past a membrane held between two electrodes. 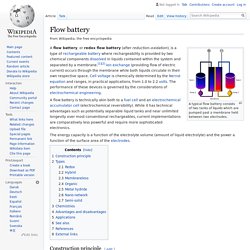 A flow battery, or redox flow battery (after reduction–oxidation), is a type of rechargeable battery where rechargeability is provided by two chemical components dissolved in liquids contained within the system and separated by a membrane.[1][2] Ion exchange (providing flow of electric current) occurs through the membrane while both liquids circulate in their own respective space. Cell voltage is chemically determined by the Nernst equation and ranges, in practical applications, from 1.0 to 2.2 volts. The performance of these devices is governed by the considerations of electrochemical engineering. Commodity cell. A commodity cell is a type of battery made in large volumes for use by original equipment manufacturers. For example, commodity cells are used in laptops and cell phones, as the energy storage element in its batteries.

Common battery may include one or more power conversion devices to transform commercial power to direct current, with an electrolytic battery floating across the output. Common battery operation largely replaced local batteries in each telephone in the early 20th century. This article incorporates public domain material from the General Services Administration document "Federal Standard 1037C" (in support of MIL-STD-188). Nonvolatile BIOS memory.

CMOS battery[edit] The memory battery (aka motherboard, CMOS, real-time clock-RTC, clock battery)[2][3] is generally a CR2032 lithium coin cell. These cells last two to ten years, depending on the type of motherboard, ambient temperature and the length of time that the system is powered off, while other common cell types can last significantly longer or shorter periods, such as the CR2016 which will generally last about 40% less than CR2032. Higher temperatures and longer power-off time will shorten cell life. When replacing the cell, the system time and CMOS BIOS settings may revert to default values. This may be avoided by replacing the cell with the power supply master switch on. Button cell. Biobattery. A bio-battery is an energy storing device that is powered by organic compounds, usually being glucose, such as the glucose in human blood. When enzymes in human bodies break down glucose, several electrons and protons are released.

Therefore, by using enzymes to break down glucose, bio-batteries directly receive energy from glucose. These batteries then store this energy for later use.[1] This concept is almost identical to how both plants and many animals obtain energy. Although the batteries are still being tested before being commercially sold, several research teams and engineers are working to further advance the development of these batteries. [2] Battery room. Telecommunications[edit] Telephone system central offices contain large battery systems to provide power for customer telephones, telephone switches, and related apparatus.[2] Terrestrial microwave links, cellular telephone sites, fibre optic apparatus and satellite communications facilities also have standby battery systems, which may be large enough to occupy a separate room in the building.

In normal operation power from the local commercial utility operates telecommunication equipment, and batteries provide power if the normal supply is interrupted. These can be sized for the expected full duration of an interruption, or may be required only to provide power while a standby generator set or other emergency power supply is started. Battery pack. Components of battery packs include the individual batteries or cells, and the interconnects which provide electrical conductivity between them. Rechargeable battery packs often contain a temperature sensor, which the battery charger uses to detect the end of charging. Interconnects are also found in batteries as they are the part which connects each cell, though batteries are most often only arranged in series strings. Battery (vacuum tube) Backup battery.