Communication Systems/Antennas. Antennas[edit] The purpose of an antenna is to collect and convert electromagnetic waves to electronic signals. 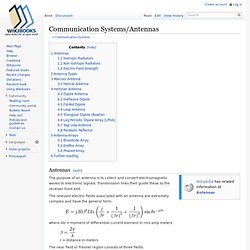 Transmission lines then guide these to the receiver front end. The relevant electric fields associated with an antenna are extremely complex and have the general form: where Idz = moment of differential current element in rms amp meters r = distance in meters. Cellular Repeater Antennas. In an effort to set up a cellular repeater in an area with no line-of-sight (LOS) connections to any cell phone tower, a number of different types of outside antennas were tried. 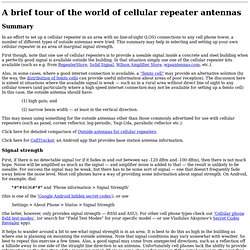 This summary may help in selecting and setting up your own cellular repeater in an area of marginal signal strength. First though, note that one use of cellular repeaters is to provide a useable signal inside a concrete and steel building when a perfectly good signal is available outside the building. Antenna (radio), wikipedia. Antenna, wikipedia. Antenna (pl. antennas in radio/TV, antennae in biology) may refer to: Science and engineering[edit] Technology[edit] Biology[edit] Music[edit] Film and TV[edit] 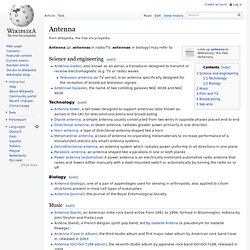 Antenna Propagation Models. Velocity factor. The velocity factor (VF),[1] also called wave propagation speed or velocity of propagation (VoP or ),[2] of a transmission medium is the speed at which a wavefront (of an acoustic signal, for example, or an electromagnetic signal, a radio signal, a light pulse in a fibre channel or a change of the electrical voltage on a copper wire) passes through the medium, relative to the speed of light. 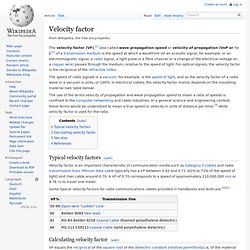 For optical signals, the velocity factor is the reciprocal of the refractive index. The Antenna Theory Website. Topics Related to Antenna Theory. Jobs and Careers in Antenna Engineering. Supposing that you like the field of antennas and electromagnetics so much that you would consider doing it for a career, what types of opportunities are available? 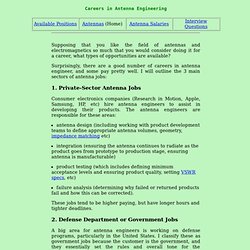 Surprisingly, there are a good number of careers in antenna engineer, and some pay pretty well. I will outline the 3 main sectors of antenna jobs: Introduction to Antennas. In the 1890s, there were only a few antennas in the world. These rudimentary devices were primarly a part of experiments that demonstrated the transmission of electromagnetic waves. By World War II, antennas had become so ubiquitous that their use had transformed the lives of the average person via radio and television reception. The number of antennas in the United States was on the order of one per household, representing growth rivaling the auto industry during the same period. By the early 21st century, thanks in large part to mobile phones, the average person now carries one or more antennas on them wherever they go (cell phones can have multiple antennas, if GPS is used, for instance). This significant rate of growth is not likely to slow, as wireless communication systems become a larger part of everyday life. 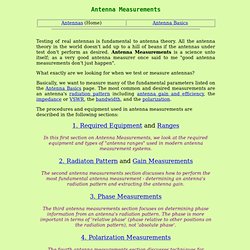 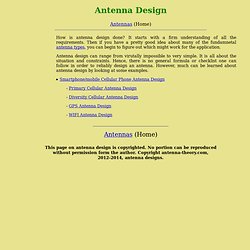 It starts with a firm understanding of all the requirements. Then if you have a pretty good idea about many of the fundamnetal antenna types, you can begin to figure out which might work for the application. Antenna design can range from virutally impossible to very simple. Antenna Basics. Let's get right down to the study of antennas and Antenna Basics. 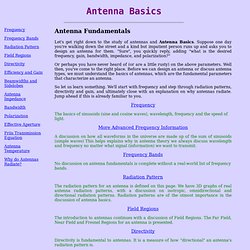 Suppose one day you're walking down the street and a kind but impatient person runs up and asks you to design an antenna for them. "Sure", you quickly reply, adding "what is the desired frequency, gain, bandwidth, impedance, and polarization? " Or perhaps you have never heard of (or are a little rusty) on the above parameters. Well then, you've come to the right place. Before we can design an antenna or discuss antenna types, we must understand the basics of antennas, which are the fundamental parameters that characterize an antenna. Antenna Efficiency and Antenna Gain. Antenna Gain. Beamwidths and Sidelobes: Radiation Pattern Definitions. In addition to directivity, the radiation patterns of antennas are also characterized by their beamwidths and sidelobe levels (if applicable). 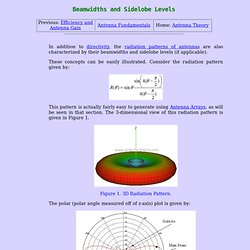 These concepts can be easily illustrated. Consider the radiation pattern given by: This pattern is actually fairly easy to generate using Antenna Arrays, as will be seen in that section. The 3-dimensional view of this radiation pattern is given in Figure 1. Figure 1. 3D Radiation Pattern. The polar (polar angle measured off of z-axis) plot is given by: Figure 2. The Short Dipole Antenna. The short dipole antenna is the simplest of all antennas. 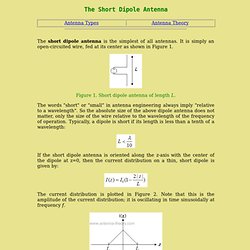 It is simply an open-circuited wire, fed at its center as shown in Figure 1. Figure 1. Directivity - Antenna-Theory.com. As you can see from the above table, the directivity of an antenna can vary over several order of magnitude. Hence, it is important to understand directivity in choosing the best antenna for your specific application. If you need to transmit or receive energy from a wide variety of directions (example: car radio, mobile phones, computer wifi), then you should design an antenna with a low directivity.

Conversely, if you are doing remote sensing, or targetted power transfer (example: received signal from a mountain top), you want a high directivity antenna, to maximize power transfer and reduce signal from unwanted directions. A Little Bit of Antenna Design.

Directivity. Smith Charts. The Smith Chart is a fantastic tool for visualizing the impedance of a transmission line and antenna system as a function of frequency. Smith Charts can be used to increase understanding of transmission lines and how they behave from an impedance viewpoint. Smith Charts are also extremely helpful for impedance matching, as we will see. The Smith Chart is used to display an actual (physical) antenna's impedance when measured on a Vector Network Analyzer (VNA). Antenna Theory - Decibels (dB) Many parameters related to antennas are measured in decibels; for instance, gain is often specified in decibels, written as 10 dB. Or maybe the minimum received power for an antenna system to work is specified as -70 dBm (decibels relative to a milliWatt).

Or the transmit power of your cell phone is given as -3 dB. Why is this? Impedance of an Antenna. Antenna impedance relates the voltage to the current at the input to the antenna. This is extremely important as we will see. Let's say an antenna has an impedance of 50 ohms. This means that if a sinusoidal voltage is applied at the antenna terminals with an amplitude of 1 Volt, then the current will have an amplitude of 1/50 = 0.02 Amps. Since the impedance is a real number, the voltage is in-phase with the current. Alternatively, suppose the impedance is given by a complex number, say Z=50 + j*50 ohms.

Note that "j" is the square root of -1. If Z=50 + j*50, then the impedance has a magnitude equal to: The phase will be equal to: This means the phase of the current will lag the voltage by 45 degrees. The electric current will then be equal to: Hence, antenna impedance is a simple concept. While simple, we will now explain why this is important, considering both the low frequency and high frequency cases. Low Frequency Figure 1. From circuit theory, we know that P=I*V. High Frequency. Impedance Matching. Antenna Arrays. An antenna array (often called a 'phased array') is a set of 2 or more antennas. The signals from the antennas are combined or processed in order to achieve improved performance over that of a single antenna.