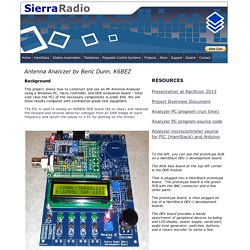 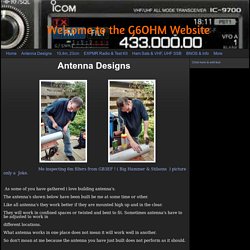 This could be particularly helpful if you lived in a mobile home and did not want your neighbours to realise you had a transmitting antenna. Other suggestions were made at the time included making a fake patio umbrella but the name ? Flower Pot? Has stuck for the last 14 or so years. I have made quite a few of these antennas and they work very well.The flowerpot works well as a scanner antenna for VHF and UHF listening.Like most antennas mount the flowerpot high and clear they work well.My father Les G6SXB uses one when he goes caravaning so here it is the : 2m and 70cm FlowerPot Antenna Note size of tube and turns on choke altered to uk tube size Someone asked me how much power the Flowerpot will take.

Add SDRplay-related software to your existing Raspberry Pi SD card – SDRplay. Our Downloadable SD card images which allow you to run SDR software on an RSP connected to a Raspberry Pi have proved to be popular. 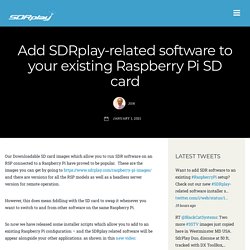 These are the images you can get by going to and there are versions for all the RSP models as well as a headless server version for remote operation. However, this does mean fiddling with the SD card to swap it whenever you want to switch to and from other software on the same Raspberry Pi. So now we have released some installer scripts which allow you to add to an existing Raspberry Pi configuration – and the SDRplay related software will be appear alongside your other applications. as shown in this new video: In the video we show how to download, extract and execute installer scripts for the SDRplay API, CubicSDR and RSP_TCP Server. These installer scripts are available from (select your RSP and choose ARM Raspberry Pi OS – then chooses API – you can then download the API Installation & these new installer Scripts)

MFJ-971 Portable Antenna Tuner Modifications – M0UKD – Amateur Radio Blog. The MFJ-971 has the potential to be a great portable tuner. 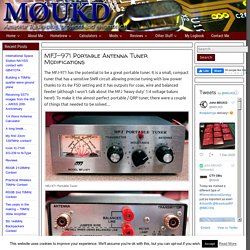 It is a small, compact tuner that has a sensitive SWR circuit allowing precise tuning with low power thanks to its 6w FSD setting and it has outputs for coax, wire and balanced feeder (although I won’t talk about the MFJ ‘heavy duty’ 1:4 voltage baluns here!). To make it the almost perfect portable / QRP tuner, there were a couple of things that needed to be solved… Yaesu MH-31 Electret Condenser Mic Modification – M0UKD – Amateur Radio Blog.

When they built the FT-817, I think its such a shame they did not include a speech compressor. 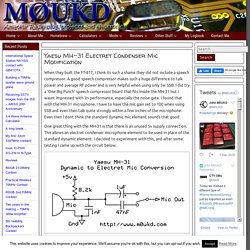 A good speech compressor makes such a huge difference to talk power and average RF power and is very helpful when using only 5w SSB. I did try a ‘One Big Punch’ speech compressor board that fits inside the MH-31 but I wasnt impressed with its performance, especially the noise gate. I found that with the MH-31 microphone, I have to have the mic gain set to 100 when using SSB and even then talk quite strongly within a few inches of the microphone. Even then I dont think the standard dynamic mic element sounds that good. One great thing with the MH-31 is that there is an unused 5v supply connection. 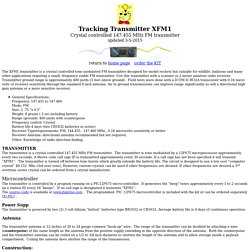 Use this transmitter with a scanner or 2 meter amateur radio receiver. Transmitter ground range is approximately 400 yards (5 feet above ground) . Antenna Tuning for Beginners. Heard about antenna tuning but couldn’t get past the mathematics behind it? 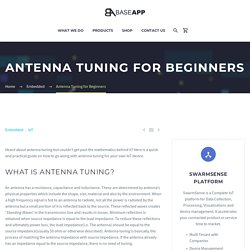 Here is a quick and practical guide on how to go along with antenna tuning for your own IoT device. What is antenna tuning? An antenna has a resistance, capacitance and inductance. These are determined by antenna’s physical properties which include the shape, size, material and also by the environment. When a high frequency signal is fed to an antenna to radiate, not all the power is radiated by the antenna but a small portion of it is reflected back to the source. SimSmith. Page content last updated Mar 8, 2019 Copyright © 2017-2019 Larry Benko, W0QE SimSmith is in my opinion one of the best ways to learn and better understand RF (radio frequency) concepts. 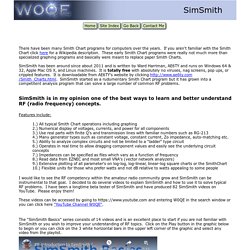 I would like to see the RF competency within the amateur radio community grow and SimSmith can be instrumental to that goal. How Radio Waves Transmit Data?. Wireless technologies are now… Ulrich Graf, DK4SX. Dataprobe - Network Reliability. MSK441. MSK441 Techinqucially speaking this is a form of PSK modulation called OQPSK or Offset Quadature Phase Shift Keying Little about OQPSK Offset quadrature phase-shift keying (OQPSK) is a variant of phase-shift keying modulation using 4 different values of the phase to transmit. 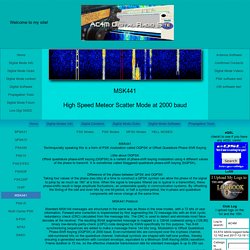 It is sometimes called Staggered quadrature phase-shift keying (SQPSK). Difference of the phase between QPSK and OQPSKTaking four values of the phase (two bits) at a time to construct a QPSK symbol can allow the phase of the signal to jump by as much as 180° at a time. - Source RF 2.4GHz RF Source. - Bluetooth Headset with PTT for Amateur Radio. A Bluetooth Headset Interface with built-in PTT for Amateur Radio By: Bertrand Zauhar, VE2ZAZ Page last updated: 03/11/2010 This page presents an interface to a Bluetooth headset for Amateur radio application. 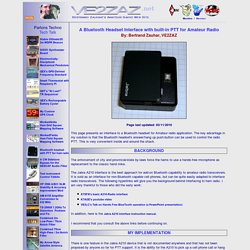 The key advantage in my solution is that the Bluetooth headset's answer/hang up push-button can be used to control the radio PTT. This is very convenient inside and around the shack. The enforcement of city and provincial/state by-laws force the hams to use a hands-free microphone as replacement to the classic hand mike. The Jabra A210 interface is the best approach for add-on Bluetooth capability to amateur radio transceivers. In addition, here is the Jabra A210 interface instruction manual. I recommend that you consult the above links before continuing on.

K8IG. Andy builds a genius companion control display for the Yaesu FT-817 transceiver. Many thanks to SWLing Post contributor, Andy Webster (G7UHN), who kindly shares the following guest post: by Andy Webster (G7UHN) Like so many I love getting out portable with my FT-817 but I do seem to spend so much of my operating time fiddling through the soft-keys because my most used functions (CW narrow filter, power and keyer settings to tune an ATU, A/B, A=B, etc.) are spread across different “pages” of the A,B,C assignments.

Bits & Pieces - Palomar Engineers® We get many requests for spare parts for out of production Palomar Engineer products. Here are the ones we have on hand: Tuner Tuner Fuse Replacement Tuner Tuner Interior Showing Fuse Location As time goes by older products are discontinued. Articles Archives - CW Touch Keyer. Amateur radios, also known as Ham Radios, were basically designed for leisure and entertainment purpose. However, throughout the years, they have proven to be very helpful and life-saving in several times of emergency. Amateur radios or ham radios offer an essential service in enabling a two-way radio communication system that … Amateur/ ham radio is a fun hobby for people around the world.

It is used to speak to people across towns or countries and even into space. As it covers such a wide spectrum. SteppIR BigIR Vertical Antenna Part 1 – Assembly & Installation. The KA7OEI FT-817 page. The KA7OEI FT-817 pages The Yaesu FT-817 is an extremely portable HF through UHF all-mode transceiver, capable of operation on all amateur bands from 160 meters through 70 cm (excluding, unfortunately, 222 MHz.) It is also considered to be a QRP transceiver - being capable of only 5 watts output maximum. In addition to transceive operation on these amateur bands, it also is a capable general-coverage receiver providing continuous coverage on all modes from 100 KHz through 56 MHz, 108 through 154 MHz, and 420 through 470 MHz. It also provides "Wide FM" receive coverage from 76 through 108 MHz.

How to Get on the Air When You Aren’t Supposed to Have Visible Antennas ﻿ – OnAllBands. It all started when I wanted to put up an antenna, but it couldn’t be visible from the street. The peak of my roof is 24 feet so that created the upper boundary for the antenna. That pretty much ruled out any type of horizontal antenna. The orientation of the property also ruled out any traditional antenna for the lower bands, especially 160 meters or 80 meters. Zero to 160m DXCC in One Year: Installing the DX Engineering 160 Meter Thunderbolt Vertical Antenna – OnAllBands. Comparing shortwave antennas with Python. MFJ 259 antenna analyzer calibration, problems, and service warnings. Revised 8/24/03 Revised May 18, 2005 R84 named in error R89 in harmonic adjustment Major revision June 24, 2012. Articles. These are magazine articles on ham radio topics that have been published by W6NBC. 20xx QSTcopperhelixantenna. Andy builds a genius companion control display for the Yaesu FT-817 transceiver.

3D Printing Your Own Antennas - Antenna Test Lab Co. It Works, and You Can Do It! DstFuse5. eHam.net. 5.37 dBi (2m) and 7.39 dBi (70cm) at 14 ft. KiwiSDR: Wide-band SDR + GPS cape for the BeagleBone Black. PA3FWM's homepage. Trunked Radio: A Guide – AndrewNohawk. TLDR; You can listen to all of the San Francisco CERS (Public Safety) Trunked system at , this guide will show you how you can do the same for it or another trunked system! Adventures with an 80 Meter Loop Antenna, Part 1. Some years ago while I was dating the woman who would become my wife, I thought about setting up a station at her home in Nevada City, California, that I could use when I visited her. Talking with friends on the morning 75 meter net, one recommended that I install a full-wave 80 meter loop. Given her large lot and the pine trees in her back yard that could be used as supports, I thought, "Why not? " Simple Home-Built Radio Projects. Homebrew RF Circuit Design Ideas.