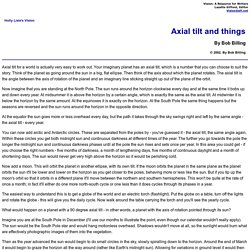 Your imaginary planet has an axial tilt, which is a number that you can choose to suit the story. Think of the planet as going around the sun in a big, flat ellipse. Now imagine that you are standing at the North Pole. At the equator the sun goes more or less overhead every day, but the path it takes through the sky swings right and left by the same angle - the axial tilt - every year. You can now add arctic and Antarctic circles. Now add a moon. The easiest way to understand this is to get a globe of the world and an electric torch (flashlight). What would happen on a planet with a 90 degree axial tilt - in other words, a planet with the axis of rotation pointed through its sun? Imagine you are at the South Pole in December (I'll use our months to illustrate the point, even though our calendar wouldn't really apply). Wind-and-pressure-jan-enlarge.jpg (JPEG Image, 800 × 414 pixels) 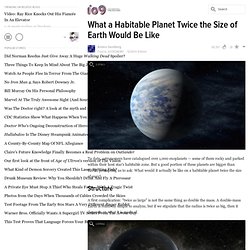 Three Things To Keep In Mind About The Big Jack The Ripper 'Reveal' Watch As People Flee In Terror From The Giant Mutant Spider Dog No Iron Man 4, Says Robert Downey Jr. Bill Murray On His Personal Philosophy. If the Earth Stood Still - What Would Happen if the Earth Stopped Spinning? Modeling the absence of centrifugal force By Witold Fraczek, Esri This article as a PDF. 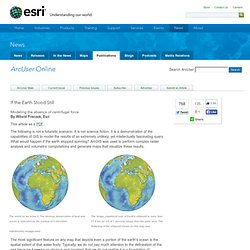 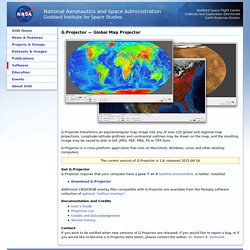 Longitude-latitude gridlines and continental outlines may be drawn on the map, and the resulting image may be saved to disk in GIF, JPEG, PDF, PNG, PS or TIFF form. G.Projector is a cross-platform application that runs on Macintosh, Windows, Linux and other desktop computers. Courants marins. Aline 07b. Blue Planet Biomes - World Biomes. What is a Biome?

A biome is a large geographical area of distinctive plant and animal groups, which are adapted to that particular environment. The climate and geography of a region determines what type of biome can exist in that region. Major biomes include deserts, forests, grasslands, tundra, and several types of aquatic environments. Each biome consists of many ecosystems whose communities have adapted to the small differences in climate and the environment inside the biome. World Climates. Some facts about climate The sun's rays hit the equator at a direct angle between 23 ° N and 23 ° S latitude. 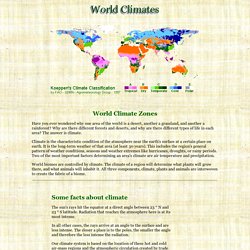 Radiation that reaches the atmosphere here is at its most intense. Biomes. Tectonic plates-motions. What Effect Does Geography Have on Climate? Geography has a primary effect on climate, and a good idea can be formed about the particular climate of a given area by its location on a map. 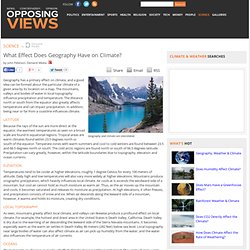 The mountains, valleys and bodies of water in local topography influence precipitation and temperature. The distance north or south from the equator also greatly affects temperature and can impact precipitation. In addition, being near or far from a coastline influences climate. Latitude Because the rays of the sun are more direct at the equator, the warmest temperatures as seen on a broad scale are found in equatorial regions. Elevation Temperatures tend to be cooler at higher elevations, roughly 1 degree Celsius for every 100 meters of altitude. Local Topography As seen, mountains greatly affect local climate, and valleys can likewise produce a profound effect on local climate. Oceans The temperature of ocean currents will affect climate along coastlines and inland. How would multiple moons affect the tides? Re: How would multiple moons affect the tides? 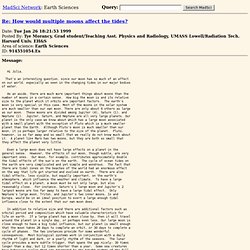