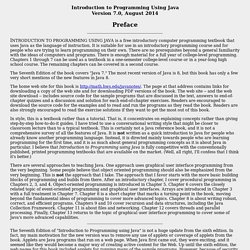 It is suitable for use in an introductory programming course and for people who are trying to learn programming on their own. There are no prerequisites beyond a general familiarity with the ideas of computers and programs. Overview: The Mental Landscape. Chapter 1 When you begin a journey, it's a good idea to have a mental map of the terrain you'll be passing through. 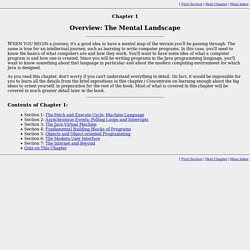 The same is true for an intellectual journey, such as learning to write computer programs. The Fetch and Execute Cycle: Machine Language. Section 1.1 A computer is a complex system consisting of many different components. 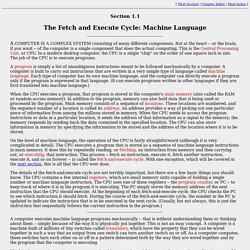 But at the heart -- or the brain, if you want -- of the computer is a single component that does the actual computing. This is the Central Processing Unit, or CPU. Asynchronous Events: Polling Loops and Interrupts. Section 1.2 The CPU spends almost all of its time fetching instructions from memory and executing them. 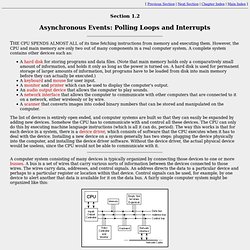 However, the CPU and main memory are only two out of many components in a real computer system. The Java Virtual Machine. Section 1.3 Machine language consists of very simple instructions that can be executed directly by the CPU of a computer. 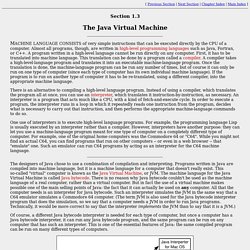 Almost all programs, though, are written in high-level programming languages such as Java, Fortran, or C++. A program written in a high-level language cannot be run directly on any computer. First, it has to be translated into machine language. This translation can be done by a program called a compiler. Fundamental Building Blocks of Programs.

Section 1.4 There are two basic aspects of programming: data and instructions. 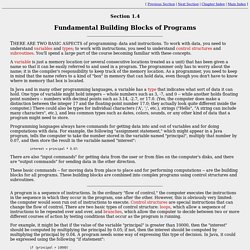 To work with data, you need to understand variables and types; to work with instructions, you need to understand control structures and subroutines. You'll spend a large part of the course becoming familiar with these concepts. A variable is just a memory location (or several consecutive locations treated as a unit) that has been given a name so that it can be easily referred to and used in a program. Objects and Object-oriented Programming. Section 1.5 Programs must be designed. 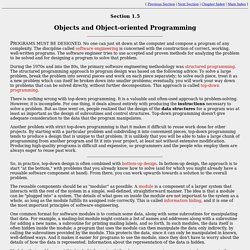 No one can just sit down at the computer and compose a program of any complexity. The discipline called software engineering is concerned with the construction of correct, working, well-written programs. The Modern User Interface. Section 1.6 When computers were first introduced, ordinary people -- including most programmers -- couldn't get near them. 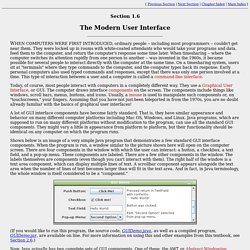 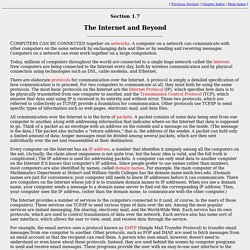 A computer on a network can communicate with other computers on the same network by exchanging data and files or by sending and receiving messages. <== Parties faites Parties à faire ==> Javanotes 7.0, Quiz on Chapter 1. Programming in the Small I: Names and Things. Chapter 2 On a basic level (the level of machine language), a computer can perform only very simple operations. 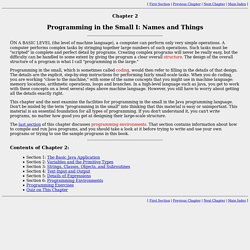 A computer performs complex tasks by stringing together large numbers of such operations. Such tasks must be "scripted" in complete and perfect detail by programs. Creating complex programs will never be really easy, but the difficulty can be handled to some extent by giving the program a clear overall structure. The Basic Java Application. Section 2.1 A program is a sequence of instructions that a computer can execute to perform some task. A simple enough idea, but for the computer to make any use of the instructions, they must be written in a form that the computer can use. This means that programs have to be written in programming languages. Programming languages differ from ordinary human languages in being completely unambiguous and very strict about what is and is not allowed in a program. The rules that determine what is allowed are called the syntax of the language.

Variables and the Primitive Types. Section 2.2 Names are fundamental to programming. In programs, names are used to refer to many different sorts of things. In order to use those things, a programmer must understand the rules for giving names to them and the rules for using the names to work with them. <== Parties faites Parties à faire ==> Strings, Classes, Objects, and Subroutines. Section 2.3 The previous section introduced the eight primitive data types and the type String. There is a fundamental difference between the primitive types and String: Values of type String are objects. Javanotes 7.0, Section 2.4. Section 2.4 We have seen that it is very easy to display text to the user with the functions System.out.print and System.out.println. But there is more to say on the topic of outputting text. Furthermore, most programs use data that is input to the program at run time, so you need to know how to do input as well as output.

This section explains how to get data from the user, and it covers output in more detail than we have seen so far. It also has a section on using files for input and output. Javanotes 7.0, Section 2.5. Section 2.5 This section takes a closer look at expressions. Recall that an expression is a piece of program code that represents or computes a value. An expression can be a literal, a variable, a function call, or several of these things combined with operators such as + and >. The value of an expression can be assigned to a variable, used as a parameter in a subroutine call, or combined with other values into a more complicated expression.