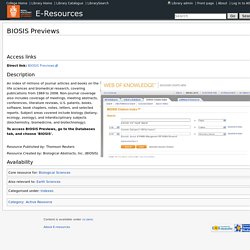 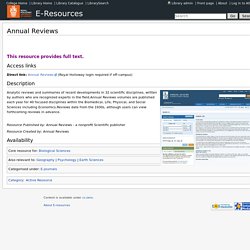 Access links Direct link: Annual Reviews (Royal Holloway login required if off-campus) Description Analytic reviews and summaries of recent developments in 32 scientific disciplines, written by authors who are recognized experts in the field.Annual Reviews volumes are published each year for 40 focused disciplines within the Biomedical, Life, Physical, and Social Sciences including Economics.Reviews date from the 1930s, although users can view forthcoming reviews in advance. Resource Published by: Annual Reviews - a nonprofit Scientific publisher Resource Created by: Annual Reviews Availability. Zoology: a degree that'll drive you wild - Magazines - Student - The Independent. These tools range from satellites to give us information on local and global environmental conditions through digital video equipment to molecular probes that identify sub-cellular phenomena. 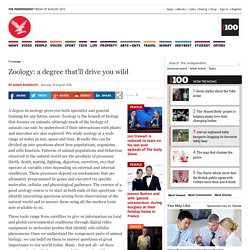 Once we understand the component parts of animal biology, we can build on them to answer questions of great importance to our world today. Many - but not all - of these questions involve the human animal, Homo sapiens. How can we protect the millions of other species with which we share this planet? How can we complete our knowledge of these species by finding, identifying and classifying them? 2010%20Sekercioglu%20OUP%20Conservation%20Book%20Ecosystem%20Services.pdf. 2010%20Sekercioglu%20Animal%20Conservation%20Tropical%20Nocturnal%20Birds.pdf. 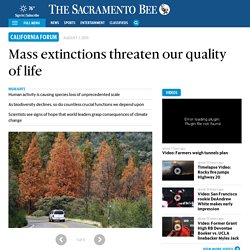 Or a bumblebee? A ponderosa pine? None of these Northern California species shows up on either the state or federal endangered list – not even lists for threatened species. Yet these familiar and unheralded flora and fauna are among those we may miss the most as the climate continues to warm. Human activity is causing extinctions of unprecedented scale, scientists say. Most of us don’t think about extinction as we go about our lives.

It is when we consider the impacts of extinction on our own immediate future that it becomes alarmingly relevant. Take the often vilified vulture. As plants and animals decline around the world, we humans are losing the quality that biodiversity brings to our lives. Despite their dire predictions, scientists involved in the recent reports point to signs of hope that world leaders are grasping the consequences of transforming Earth’s vibrant species diversity into the walking dead. The 15 Tweaks That Made Us Human. Humans are possibly the weirdest species to have ever lived. 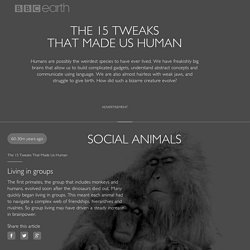 We have freakishly big brains that allow us to build complicated gadgets, understand abstract concepts and communicate using language. We are also almost hairless with weak jaws, and struggle to give birth. How did such a bizarre creature evolve? Advertisement The 15 Tweaks That Made Us Human Living in groups The first primates, the group that includes monkeys and humans, evolved soon after the dinosaurs died out. A gene for blood flow. Wired-03-14-2011. Wired, March 14, 2011 Sperm Whales May Have Names By Brandon Keim Subtle variations in sperm-whale calls suggest that individuals announce themselves with discrete personal identifier. 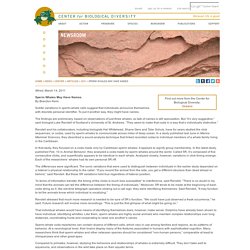 To put it another way, they might have names. The findings are preliminary, based on observations of just three whales, so talk of names is still speculation. But “it’s very suggestive,” said biologist Luke Rendell of Scotland’s University of St. Biogeodb.stri.si. Animals.nationalgeographic. African elephants are the largest land animals on Earth. 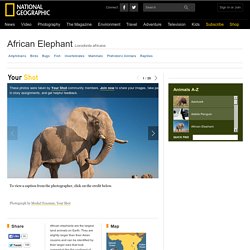 They are slightly larger than their Asian cousins and can be identified by their larger ears that look somewhat like the continent of Africa. (Asian elephants have smaller, rounded ears.) Elephant ears radiate heat to help keep these large animals cool, but sometimes the African heat is too much. Elephants are fond of water and enjoy showering by sucking water into their trunks and spraying it all over themselves. Afterwards, they often spray their skin with a protective coating of dust.

An elephant's trunk is actually a long nose used for smelling, breathing, trumpeting, drinking, and also for grabbing things—especially a potential meal. Both male and female African elephants have tusks they use to dig for food and water and strip bark from trees. Because ivory is so valuable to some humans, many elephants have been killed for their tusks. Www.ultimateungulate. Free-Biology-Video-lectures-ltv526-Page1.