Eight (harsh) Truths That Will Improve Your Life... Words of Wisdom For Woodworkers. Do not argue with an idiot; he will drag you down to his level and beat you with experience. 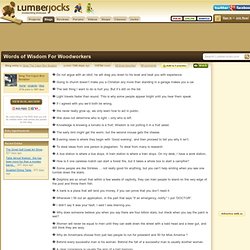 Going to church doesn’t make you a Christian any more than standing in a garage makes you a car. The last thing I want to do is hurt you; But it’s still on the list. Light travels faster than sound. This is why some people appear bright until you hear them speak. This Moment. By Leo Babauta We all suffer, every day: worry, procrastination, anxiety, feeling overwhelmed, irritated, angry, frustrated, wishing things were different, comparing ourselves to others, worried we’re missing out, wishing other people would be different, feeling offended, loneliness, fear of failure, not wanting to do something, wishing we had less fat or bigger boobs or bigger muscles, angry at being controlled, wanting to find the perfect someone, wishing our partner was more perfect, stressed about finances, not wanting to think about problems, not knowing how to fix things, uncertain about choices, rushing from one task to the next, not liking our jobs. 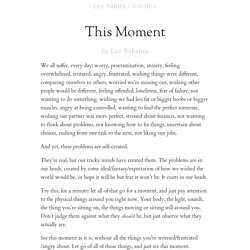 And yet, these problems are self-created. This Is Your Brain on Nature. When you head out to the desert, David Strayer is the kind of man you want behind the wheel. 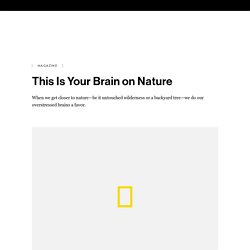 He never texts or talks on the phone while driving. He doesn’t even approve of eating in the car. If You're Too Busy to Meditate, Read This. This morning, like every morning, I sat cross-legged on a cushion on the floor, rested my hands on my knees, closed my eyes, and did nothing but breathe for 20 minutes. 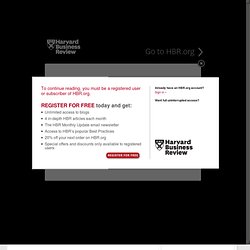 People say the hardest part about meditating is finding the time to meditate. This makes sense: who these days has time to do nothing? It’s hard to justify. 6 Things You Might Live To Regret If You Don't Stop Doing Them Now. In history as in human life, regret does not bring back a lost moment and a thousand years will not recover something lost in a single hour. ~ Stefan Zwei And regret will never bring back one missed chance or one ‘if only.’ 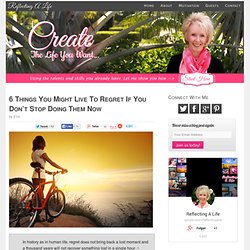 Don’t wait until you’re overwhelmingly desperate to start making changes…stop doing the wrong things now and create space for the things that will make you happy. 7 Crucial Things You Need To Be Honest About. Honesty is the best policy, right? 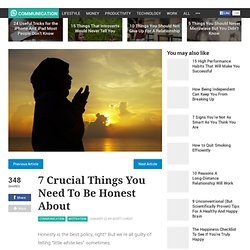 But we’re all guilty of telling “little white lies” sometimes. Regardless, there are certain things in life it’s important to be honest about. Here are 7 of them. Your guilty pleasures. Everyone has a guilty pleasure or two. Top 7 Myths about Yoga – Busted! There is a lot of “yoga” happening in the world today that has very little to do with what yoga really is. 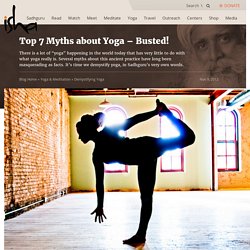 Several myths about this ancient practice have long been masquerading as facts. It’s time we demystify yoga, in Sadhguru’s very own words. Read in Hindi: योग से जुड़ी सात भ्रांतियांஎது யோகா இல்லை? Myth 1: Yoga comes from Hinduism Sadhguru: Yoga is Hindu just the way gravity is Christian. Guided Meditation - Banishing Depression. 50 Questions That Will Free Your Mind. 20 Things I Should Have Known at 20. Enlightenment & The Power of Now. 9 Epiphanies That Shifted My Perspective Forever.

By David Over the years I’ve learned dozens of little tricks and insights for making life more fulfilling. 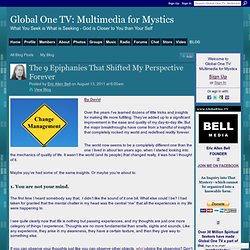 They’ve added up to a significant improvement in the ease and quality of my day-to-day life. But the major breakthroughs have come from a handful of insights that completely rocked my world and redefined reality forever. The world now seems to be a completely different one than the one I lived in about ten years ago, when I started looking into the mechanics of quality of life. It wasn’t the world (and its people) that changed really, it was how I thought of it. Maybe you’ve had some of the same insights. 1. The first time I heard somebody say that, I didn’t like the sound of it one bit. People Will Never Change, So Stop Trying. You can’t change anyone without his or her permission and it’s rude to try. 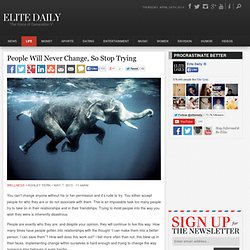 You either accept people for who they are or do not associate with them. This is an impossible task too many people try to take on in their relationships and in their friendships. Trying to mold people into the way you wish they were is inherently disastrous. People are exactly who they are, and despite your opinion, they will continue to live this way. How many times have people gotten into relationships with the thought “I can make them into a better person; I can save them”?

The Three Phases of Life. One of life's great fascinations is watching people evolve over time. 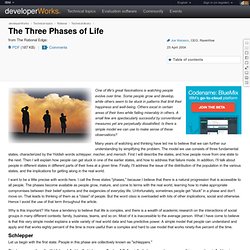 Some people grow and develop, while others seem to be stuck in patterns that limit their happiness and well-being. Others excel in certain areas of their lives while failing miserably in others. A small few are spectacularly successful by conventional measures yet are perpetually dissatisfied. Is there a simple model we can use to make sense of these observations? Many years of watching and thinking have led me to believe that we can further our understanding by simplifying the problem. Meditation Produces Opposite Effect of ‘Fight or Flight’ By Traci Pedersen Associate News Editor Reviewed by John M. Grohol, Psy.D. on May 4, 2013 A new study reveals that practitioners of meditation experience changes in gene expression that are the exact opposite of what occurs during the “flight or fight” stress response.

Specifically, genes associated with energy metabolism, mitochondrial function, insulin secretion, and telomere maintenance are turned on, while those involved in inflammation are turned off. These effects are more significant and consistent for long-term practitioners. People who practice simple meditation aren’t “just relaxing,” explained the study’s senior author, Dr. It’s been shown that repeating a yoga pose, prayer, or mantra while disregarding other thoughts protects against anxiety and depression as well as physical conditions such as hypertension, cardiovascular disease, and types of cancer that are exacerbated by stress. All of the subjects’ blood samples revealed changes in gene expression following meditation.