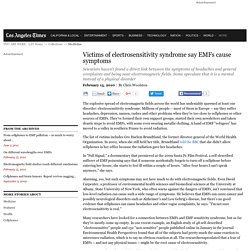 Millions of people -- most of them in Europe -- say they suffer headaches, depression, nausea, rashes and other problems when they're too close to cellphones or other sources of EMFs. They've formed their own support groups, started their own newsletters and taken drastic steps to avoid EMFs, with some even wearing metallic clothing. Electric & Magnetic Fields. Description Electric and magnetic fields (EMFs) are invisible areas of energy, often referred to as radiationDictionary of Environmental Health, that are associated with the use of electrical power and various forms of natural and man-made lighting. 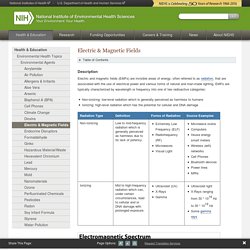 EMFs are typically characterized by wavelength or frequency into one of two radioactive categories: Non-ionizing: low-level radiation which is generally perceived as harmless to humans Ionizing: high-level radiation which has the potential for cellular and DNA damage Can EMFs be harmful to my health? During the 1990s, most EMF research focused on extremely low frequency exposures stemming from conventional power sources, such as power lines, electrical substations, or home appliances. Additionally, the few studies that have been conducted on adults show no evidence of a link between EMF exposure and adult cancers, such as leukemia, brain cancer, and breast cancer. What is EMF? To Order Call 866-821-8122 What Does EMF Stand For? 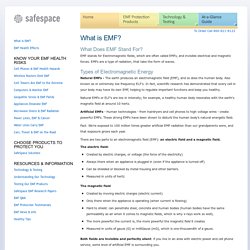 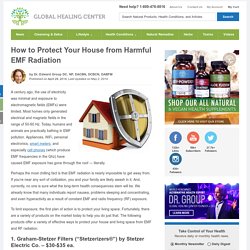 Most homes only generated electrical and magnetic fields in the range of 50-60 Hz. Today, humans and animals are practically bathing in EMF pollution. Appliances, WiFi, personal electronics, smart meters, and especially cell phones (which produce EMF frequencies in the Ghz) have caused EMF exposure has gone through the roof — literally. Perhaps the most chilling fact is that EMF radiation is nearly impossible to get away from. If you’re near any sort of civilization, you and your family are likely awash in it. To limit exposure, the first plan of action is to protect your living space. 1.

These simple filters reduce high-frequency radiation, or “dirty energy”, generated by typical home appliances. Check out this technical video for the science behind the Graham-Setzer Filters: 2. Both paints require a grounding kit and MU grounding tape (about $60 each). 3. Electric & Magnetic Fields. 10 Ways to Protect Against EMF Emissions. Image Credit / Wikipedia By: Amanda Froelich, True Activist. 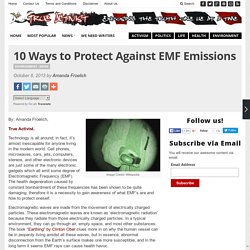 Technology is all around; in fact, it’s almost inescapable for anyone living in the modern world. Limits in the USA. Home. Mobile phone debate reignited as MTHR launches 30-year study into health risks. By Fiona Macrae for the Daily Mail Updated: 07:51 GMT, 23 April 2010 More at risk? 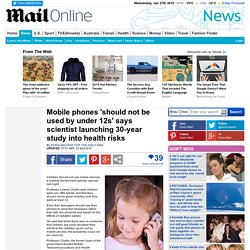 A government adviser has warned that children should not be given mobiles until they are at least 12 (file picture) Children should not use mobile phones, a leading Government adviser warned last night. Professor Lawrie Challis said children were not ‘little adults’ and that they should not be given mobiles until they were at least 12. Even then teenagers should use their phones to send text messages rather than talk, the physicist and expert on the effects of radiation added. He said that while there was no evidence that children are more sensitive than adults to the radiation given out by mobile phones, the possibility could not be ruled out. 'If a child is exposed to excessive sunlight, they are more likely to get skin cancer than an adult exposed to the same amount.

‘They are more sensitive to pollutants. He acknowledged that some parents may get peace of mind from giving their young child a mobile phone. The Little-Known Dangers of EMFs and How To Protect You and Your Family. You may have heard that electromagnetic fields (EMFs) are the cause of symptoms like cancer, insomnia and fatigue, but what can you do to protect yourself? 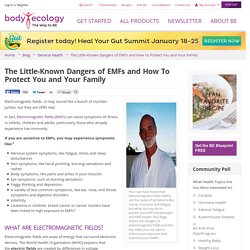 Geobiologist and EMF expert, Roy Riggs shares the dangers of electromagnetic fields and the key steps you can take to reduce your exposure and improve your health. Electromagnetic fields...it may sound like a bunch of mumbo-jumbo, but they are VERY real. In fact, Electromagnetic fields (EMFs) can cause symptoms of illness in infants, children and adults, particularly those who already experience low immunity. 34 Scientific Studies Showing Adverse Health Effects From Wi-Fi. Waking Times Here is an excellent collection of scientific papers finding adverse biological effects or damage to health from Wi-Fi signals, Wi-Fi-enabled devices or Wi-Fi frequencies (2.4 or 5 GHz), complied by campaign group WiFi In Schools. 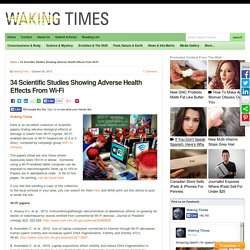 The papers listed are only those where exposures were 16V/m or below. EMF Protection and Remediation Move Your Bed Away from the Wall! How To Protect Yourself from Wireless Radiation. Make Your Immune System Stronger Reduce Your Radiation Radiation Shielding Devices Kids brain cancers in Australia have already gone up 21 percent in just 10 years. 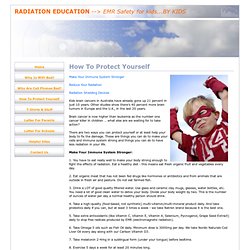 Other studies show there's 40 percent more brain tumors in Europe and the U.K., in the last 20 years. Brain cancer is now higher than leukemia as the number one cancer killer in children … what else are we waiting for to take action? There are two ways you can protect yourself or at least help your body to fix the damage. Make Your Immune System Stronger: 1. 2. 6. 9. 10. If you're not ready to completely get rid of wireless stuff, you can at least reduce your family's radiation by: • Tell your family to try to not use their cell phone: Turn your cell phone off, then just turn it on to check messages or make a quick call, then turn it back off. . • Children Should NEVER Use Cell Phones: Unless someone is dying, children should not use a cell phone, or a wireless device of any type.

WiFi signal intensity in an apartment.