The Mysterious Black Stone of Kaaba - Worship of a Meteorite? By Elizabeth Leafloor | RedIceCreations.com Hajj, the pilgrimage to Mecca, is one of the greatest religious observances in Islam. 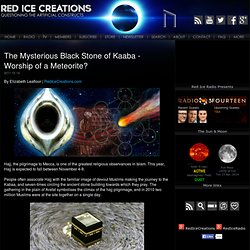 This year, Hajj is expected to fall between November 4-9. People often associate Hajj with the familiar image of devout Muslims making the journey to the Kabaa, and seven-times circling the ancient stone building towards which they pray. The gathering in the plain of Arafat symbolises the climax of the hajj pilgrimage, and in 2010 two million Muslims were at the site together on a single day. Muslim pilgrims circle the Kaaba inside the grand mosque in Mecca. Decoding the Secrets of Qur'an. Inside Islam - The History Channel. WHEN OBAMA RISES FROM THE DEAD MUSLIMS WILL WORSHIP HIM AS AL MAHDI= ANTICHRIST 666. Understanding the Muslim Mindset. Caliphate is Daniel’s Fourth Kingdom.

(Before It's News) Land the Caliphate wants within 5 years – by 2019 It may take time to sink in, but the restoration of an Islamic Caliphate in the Middle East could be the most important fulfillment of biblical prophecy since the Israelis recaptured all of Jerusalem in 1967. 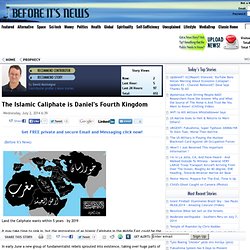