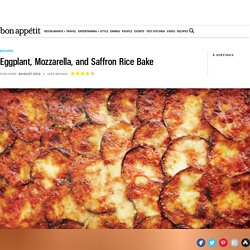 Heat 2 Tbsp. oil in a large saucepan over medium heat. Add onion; cook, stirring often, until softened, about 8 minutes. Add rice; cook, stirring constantly, for 3 minutes. Stir in saffron, then wine. Cook until wine reduces slightly, about 1 minute. Meanwhile, divide eggplant between two rimmed baking sheets, overlapping slightly to fit. Cover the bottom of a 13x9x2-inch baking dish with 1 cup tomato sauce. Cover with a layer of eggplant rounds, overlapping so no sauce is visible beneath them. Bake until sauce is bubbling and cheese is melted, about 15 minutes. Fotografii şi clipuri video Instagram. This Wacky Fried Rice Is Soon Gonna Be a New Staple. You've likely made some version of fried rice before—take a bunch of leftovers, put them in a hot skillet, and there's dinner. 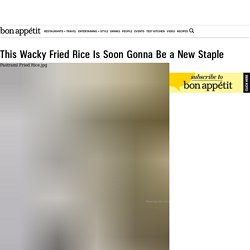 We support that method. Heck, we employ that method. But we really want you to try this slightly wackadoo version that incorporates pastrami and sauerkraut. It'll help you feel super comfortable with all fried rice recipes moving forward. Why? PSA: This recipe works best with rice that is already sitting in your fridge, drying out. (Just want the recipe? Heat 1 Tbsp. oil in a medium nonstick or cast-iron skillet over high heat. Easy Weekday Office Lunch Ideas - Bon Appétit. If we could permanently outlaw being ravenous at 11:30 a.m. while also being disappointed with the Tupperware of home-packed lunch we dutifully put in the office fridge, we absolutely would. 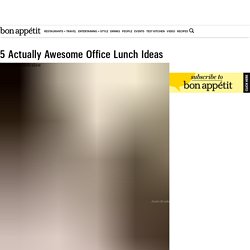 Until that happens—probably sometime when Frank Ocean's new album drops—we can at least bring lunch we actually want to eat. And that starts with making the most of loyal leftovers like rotisserie chicken and big-batch grains. Chai Recipe - Bon Appétit Recipe. Scrambled Eggs with Spinach & Parmesan Recipe. The One Clever Shortcut to Weeknight Italian Wedding Soup. Welcome to Cooking Without Recipes, in which we teach you how to make a dish we love, but don’t worry too much about the nitty-gritty details of the recipe, so you can create your own spin. 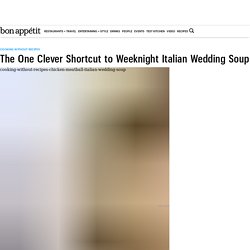 Every day this week, we'll be bringing you a staffer's favorite weeknight chicken recipe. Today, special events director Nikki Reiss shares a recipe for a 30-minute spin on Italian wedding soup. Some days, I love having the kitchen to myself. But on a busy weeknight, I’ll take any help I can get. My husband loves meatballs, which I usually reserve for an all-day Sunday sauce situation. Remove one package of fresh spicy chicken sausages from their casings and form the meat into very small meatballs before rolling in a mixture of homemade breadcrumbs and grated Parm (grate extra to top the soup later). For the soup, sauté the usual suspects in a pot—a chopped small yellow onion, two diced carrots, a few minced garlic cloves, red pepper flakes and a can of white cannellini beans. 21 Ideas For Energy-Boosting Breakfast Toasts. 27 Easy Ways To Eat Healthier. How to Make Healthy Food for the Week in Two Hours. 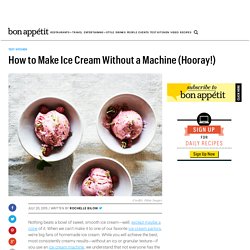 When we can’t make it to one of our favorite ice cream parlors, we’re big fans of homemade ice cream. This Cuban-Style Crispy Chicken Is So Easy You Don't Even Need a Recipe. Welcome to Cooking Without Recipes, in which we teach you how to make a dish we love, but don’t worry too much about the nitty-gritty details of the recipe, so you can create your own spin. 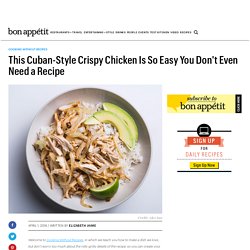 Every day this week, we’ll be bringing you a staffer’s favorite weeknight chicken recipe. Today, associate photo editor Eli Jaime shares a twist on a classic Cuban recipe. When I moved away from my hometown of Miami, little did I know how much I’d miss the food. I had grown up eating some variation of Cuban food for almost every meal. Toast Is Still Happening. Get on the Train. You may not have noticed, but there’s toast on the cover of the January 2015 issue of Bon Appétit. 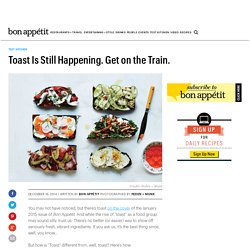 And while the rise of “toast” as a food group may sound silly, trust us: There’s no better (or easier) way to show off seriously fresh, vibrant ingredients. 25 Corn Recipes for Salad, Soup, Ice Cream, and More Slideshow Photos. 21 Fresh, Springy Salads with Seasonal Produce Slideshow Photos. How to Toast Quinoa, Rice, Farro, Oats, and Other Grains. Most people are familiar with the concept of toasting rice in a bit of butter or oil before boiling or steaming. 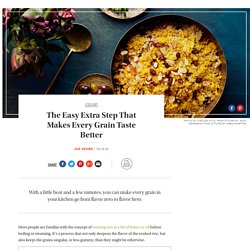 Easy Breakfast Recipes for Better Mornings. Why are so many of us content to call a bowl of cereal or a half-toasted piece of bread breakfast? 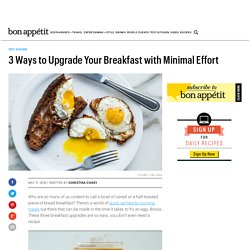 There’s a world of quick yet hearty morning meals out there that can be made in the time it takes to fry an egg. These Mozzarella Stick Onion Rings Should Run For President. How to Make Homemade Chipotle Mayo and Other Fancy Condiments. Burger season is nigh. 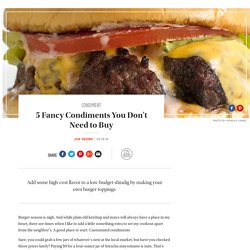 And while plain old ketchup and mayo will always have a place in my heart, there are times when I like to add a little something extra to set my cookout apart from the neighbor's. A good place to start: Customized condiments Sure, you could grab a few jars of whatever's new at the local market, but have you checked those prices lately? Paying $9 for a four-ounce jar of Sriracha mayonnaise is nuts. That's $1.13 per tablespoon! Gado Gado Recipe. During this post-Thanksgiving, pre-holidays week, BA staffers are sharing their favorite hit-the-reset button meals. This isn’t diet food—it’s the stuff that we eat when we just need a ever-so-slight detox.

Today, assistant editor Amiel Stanek shares his recipe for gado gado. This time of year, all I want is a good VDS. What’s a VDS, you ask? VDS stands for Vegetable Delivery System, the kind of dish that facilitates rapid and enthusiastic consumption of plant matter. How to Make Pesto Out Of Anything - Bon Appetit. Not to bruise your ego, basil, but you’re not the real reason people go gaga for pesto. It’s the powerhouse trifecta of hearty toasted nuts, salty aged cheese, and grassy olive oil that makes it taste so good.

The hard truth, my friend, is this: You’re totally replaceable. Chefs all over the country are whizzing up alt pestos featuring everything from ramp tops to broccoli rabe, and diners are loving them. At Southbound in Richmond, VA, chefs Joe Sparatta and Lee Gregory make one with Southern staples collard greens and peanuts that would bring a Genoan to his knees. “It’s not that basil pesto is boring—it’s just been done to death,” Sparatta says. This Cuban-Style Crispy Chicken Is So Easy You Don't Even Need a Recipe. 19 Rice Noodle Recipes Better Than Delivery. Hungover and Cooking Brunch? Here's Your Savior. Yes, everybody makes basic cooking mistakes. Like, say, something as simple as overcooking mushrooms or toasting grains and spices.

Below, Susie confesses her struggle through New Year’s Eve brunch prep while hungover to associate food editor Rick Martinez. Easy Weeknight Dinner Recipes. Some nights are meant for Chinese takeout on the couch in your “big” pants. Others are made for two-hour braised lamb shanks. But for all the nights in between, when you want to cook something easy but also can’t deal with another mediocre dinner of boiled pasta and jarred red sauce, let one of these flavorful and fast weeknight dinners do the heavy lifting while you take care of the important things—like procuring/pouring/drinking wine.