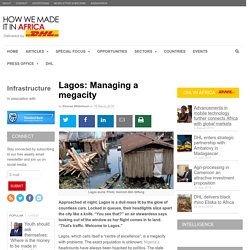 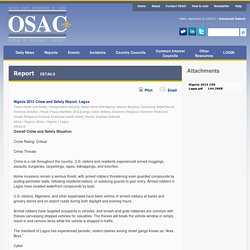 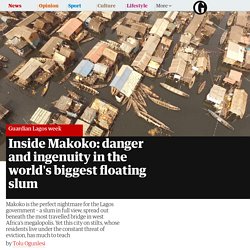 We have stopped by the Floating School, a two-storey solar-powered wooden structure that floats on the Lagos lagoon on a bed of plastic barrels. I ask him to explain what he means. It’s the young fisherman’s way of summing up the dangerous exertion that is his part-time vocation: sand dredging off the coast of Makoko, the world’s biggest floating city. The dredgers, he explains, descend a wooden ladder into the depths of the lagoon, armed with only a bucket and the will to live. The depths to which they go mean total submersion. Living in Makoko.

Living In Lagos, Is It Worth It? - Travel. FUN AND CHALLENGES OF LIVING IN LAGOSLagos, Nigeria’s centre of excellence, currently rated as the 17th most populated metropolitan area in the world and 2nd in Africa with the population of over nine million people.Like every major city of the world, Lagos too has got its own challenges. 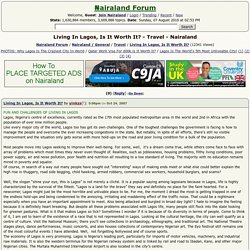 One of the toughest challenges the government is facing is how to manage the people and overcome the ever increasing congestions in the state. But notably, in spite of all efforts, there’s still no visible improvement and the situation only gets worse with more hold-ups on the road and poor living condition for a bulk of the population.Most people move into Lagos seeking to improve their well-being. For some, well, it's a dream come true, while others come face to face with array of problems which most times they never even thought of. Lagos – a city of dreams and nightmares. Nigeria is Africa’s most populous nation with more than 150 million people. 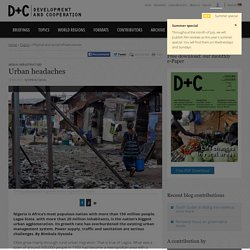 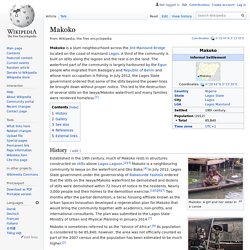 The community, which initially was founded as a fishing village, eventually developed into a slum as a result of population explosion.[1][2] In July 2012, Nigerian government officials destroyed dozens of residences in the area. The destruction of this historic community was in order to redevelop what is now seen as prime waterfront.[3] History[edit] Makoko:A girl and her sister in a canoe Established in the 18th century primarily as a fishing village, much of Makoko rests in structures constructed on stilts above Lagos Lagoon.[1][2] As of 2006, the area is essentially self-governing with a very limited government presence in the community and local security being provided by area boys.[4] In July 2012, Nigerian government officials destroyed dozens of residences after giving residents 72 hours notice of eviction.

Makoko is home to the Makoko Floating School. See also[edit] Lagos: living off the water in Makoko – in video. ​Lagos: Africa's Fastest Growing Megacity. Lagos Population 2016 - World Population Review. Lagos 2050: Megacity is preparing to double in size. For Lagos, this is the question on many experts' lips; a headache already 17.9 million people large and due to increase twofold by 2050 according to some predictions. 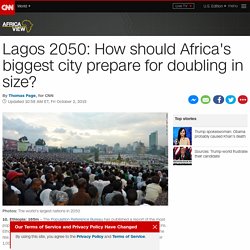 A report last week from the Population Reference Bureau predicts that by 2050 three of the 10 most populous nations globally will be African -- with Nigeria at number four. The country's population is set to rocket to 397 million, bolstered by high fertility rates and consolidated by low net migration. Lagos population ‘rises by 85 people per hour’ The World Economic Forum (WEF) says Lagos is the fastest-growing city in the world, with a growth of 85 people per hour.

The population growth of Lagos is faster than that of London and New York put together, with the two cities growing at a rate of 9 and 10 people per hour. Earlier in 2015, London reached a record 8.6 million inhabitants, while Lagos grossed over 20 million inhabitants in the same year. Delhi, India and Dhaka, the capital of Bangladesh, trail directly behind Nigeria’s commercial capital, with a population growth of 79 and 74 people per hour, respectively. Lagos. From hawkers to criminals: how the Lagos ban on street selling hurts the city. On a mostly disused railway line in Ikeja, central Lagos, Bola Jimo has spread out her wares: drinks and snacks and small goods on stools, fabrics laid out directly on the tracks. 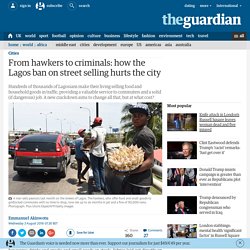 “I get here at 7 or 8 am and don’t leave until 10pm”, explains Jimo, a 40-year-old single mother of three. As we speak, her 18-year-old son minds the stall: both of her sons are street traders as well, weaving between lanes of traffic selling to commuters trapped in their cars in Lagos’s notorious gridlock. “It’s dangerous of course,” she says. “I never wanted them to do it, but life happened that way.” On a good day she makes roughly 1,000 naira (£2.50), and works six days a week. Lagos of the future: Megacity's ambitious plans. Lagos authorities have demolished houses in one of the city's coastal slumsMany people have been left displaced and without a place to sleepThe city is taking a series of steps to modernize its overburdened infrastructureLagos, one of Africa's most-populous cities, has some 15 million inhabitants (CNN) -- For decades, residents in Makoko have boarded wooden canoes to navigate through a labyrinth of narrow waterways crisscrossing a floating shanty town perched on stilts above Lagos Lagoon's murky canals. 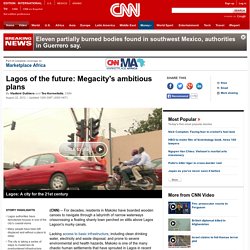 Lacking access to basic infrastructure, including clean drinking water, electricity and waste disposal, and prone to severe environmental and health hazards, Makoko is one of the many chaotic human settlements that have sprouted in Lagos in recent years. Its makeshift shacks shelter thousands of people fighting for space in one the world's most crowded cities. Untitled. Eyebrows Raised Over Stalled $1bn Light Rail Project In Lagos. Lagos State Government has had to explain the delay in the completion of the state’s light rail project for which it borrowed N160 billion ($981 million) from the World Bank. Lagos, Africa’s largest city with an estimated population of 21 million people, struggles with high population density and an ineffective transport system in desperate need of overhaul.

Lagos Rail Mass Transit. Lagos Rail Mass Transit is a system being developed and under construction[1] in Lagos, Nigeria. The system is being sponsored by the Lagos Metropolitan Area Transport Authority (LAMATA) and is envisioned to consist eventually of seven lines.[1] The railway equipment including electric power, signalling, rolling stock, and fare collection equipment will be provided by the private sector under a Concession Contract. LAMATA is responsible for policy direction, regulation, and infrastructure for the network.[2] The concessionaire will generate its own dedicated electricity.[3] The first section of the network (Phase I of the Blue Line) was originally scheduled to enter revenue service by the first quarter of 2014. It was announced in February 2016 that operations will officially start in December 2016.

Timeline[edit] History[edit] Traffic Congestion In Lagos: What It Really Looks Like [Pictures] How long does it take you to get to your office during rush-hour? Four hours? To get to work by 8.00am resumption time, what time do you leave home? Tosin Gbemile, rural reporter’s photojournalist, takes a walk around some major roads on the mainland in Lagos. Shooting from Airport road, Agidingbi (Wempco road), Awolowo road, Abeokuta express road, Ikeja, to Okota Isolo road; he presents to you, different perspective of the business hub of Nigeria during traffic congestion—also popularly called “go-slow” or “hold-up”.

Some will argue that for a city that has over 20 million people, traffic-jam/congestion is a normal feature. How To Effectively Reduce Traffic Congestion on Lagos Roads – NaijaLEARN. We lose N42bn monthly to traffic congestion in Lagos - Ambode - Daily Post Nigeria. Lagos State Governor, Akinwumi Ambode has lamented the bad traffic situation in the state. He disclosed that the state lost N42 Billion yearly due to the traffic congestion caused by the absence of enough manpower to curb the nagging traffic situation on the road. He spoke in Abuja at the sixth annual lecture of the Federal Road Safety Corps, FRSC, held at the Shehu Musa Yar’Adua Centre.

Ambode, who was represented by the Secretary to the state Government, Tunji Bello said the daily influx of people into the state, as well as economic activities, and the few road network was responsible for the chaotic situation. “As we all know, Lagos has become a sprawling megacity; as with all megacities across the world, Lagos is characterized by rapidly growing urbanization and its attendant increase in population.

Businessinsider. Lagos: Water everywhere but none to drink. By Jude Njoku & Bose Adelaja WHAT an irony! That we live in a city that is surrounded by water yet we find it extremely difficult to get potable water for drinking and other domestic uses”, exclaimed Pastor Chinonye Uzoma who resides at Amukoko, a sprawling slum in the Ifelodun Local Council Development Area, LCDA of Lagos State. The Pentecostal pastor had asked one of his parishioners who drives a tricycle popularly known as Keke Marwa to assist him get a few cans of water because the taps in his compound and indeed, the entire neighbourhood had gone dry for months.

While many residents of the ghetto depend on water vendors known as Mairuwa. for their daily supply of water, others patronise water tanker vendors or retailers who own shallow boreholes. Makoko and History and Change. By Olamide Udoma. Makoko, a Floating Slum in Nigeria. Makoko floating school turns poverty into progress. Makoko: Nigeria's floating community. Nigeria's Makoko slum where up to 250,000 residents huddle in homes on the lagoon. Does Makoko Floating School's collapse threaten the whole slum's future? Like most Lagos residents, I was familiar with Makoko Floating School. Inside Makoko: danger and ingenuity in the world's biggest floating slum. Urban poverty in Nigeria: a case study of Agege area of Lagos State, Nigeria. Falling poverty and rising income inequality in Nigeria. Official poverty and unemployment statistics for Nigeria can make bleak reading, even when compared with similar data from less wealthy countries in Sub-Saharan Africa.

The latest figures from the National Bureau of Statistics (NBS) indicate that both the unemployment rate and the proportion of people living in extreme poverty have risen in recent years. Lagos: Inside the ultimate mega-city. Insight - The struggle to tame Africa's beast of a megacity. This Is Africa's New Biggest City: Lagos, Nigeria, Population 21 Million - John Campbell. Lagos 2050: Megacity is preparing to double in size. Lagos Population 2016 - World Population Review. Welcome to Lagos: Nigeria's dirt poor. 'Beyond the chaos, there's a real human bond': Lagos residents share their stories. 'It’s money lying in the streets': Meet the woman transforming recycling in Lagos. 'Lagos shows how a city can recover from a deep, deep pit': Rem Koolhaas. Welcome to Guardian Lagos Week – live. The ingenious ways Lagos copes with blackouts – video. Lagos is expected to double in size in 15 years. How can it possibly cope?