Login. Questions and answers: The Kumamoto earthquakes. The series of huge earthquakes and aftershocks that have been rattling wide parts of Kumamoto and Oita prefectures since Thursday have raised fears that other regions in the nation might be struck by similar jolts in the near future. 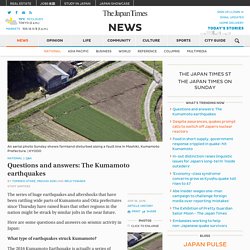 Here are some questions and answers on seismic activity in Japan: What type of earthquakes struck Kumamoto? The 2016 Kumamoto Earthquake is actually a series of quakes that are being caused by two plates slipping against each other along an active inland fault. The events take place at a relatively shallow depth and cause the destruction of bedrock. It is the same type as the Great Hanshin Earthquake of 1995 that hit Kobe and surrounding cities, killing over 6,000 people. In contrast, the Great East Japan Earthquake that hit the Tohoku region in 2011, was caused by accumulated stress resulting from one tectonic plate being forced underneath another, resulting in what is called a “megathrust quake.” Japan earthquake: Bridge collapse shows scale of damage. Ecuador earthquake of 7.8 magnitude kills dozens. Japan earthquake: Search for Kyushu survivors intensifies.

Image copyright AFP The search for survivors of two powerful earthquakes that struck the south-western Japanese island of Kyushu has intensified. 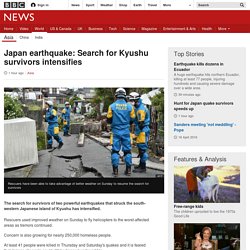 Rescuers used improved weather on Sunday to fly helicopters to the worst-affected areas as tremors continued. Concern is also growing for nearly 250,000 homeless people. At least 41 people were killed in Thursday and Saturday's quakes and it is feared that dozens of people could still be trapped under rubble. The BBC's Robin Brant says fears persist that another big quake may further damage houses already weakened. Image copyright AP About 2,000 people were treated for injuries and nearly 200 are said to be in a serious condition. Prime Minister Shinzo Abe has announced that he will increase the number of troops participating in the rescue effort to 25,000 while accepting a US offer of air transportation in the rescue efforts. 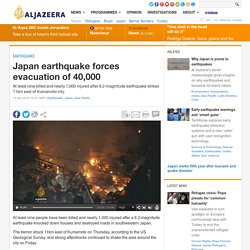 The tremor struck 11km east of Kumamoto on Thursday, according to the US Geological Survey, and strong aftershocks continued to shake the area around the city on Friday. More than 40,000 people were evacuated to schools and community centres, some spending the night outside after the first quake hit around 9:30pm local time. Roads cracked, houses crumbled and tiles fell from the roof of Kumamoto Castle in the centre of the city. More than 3,000 troops, police and firefighters were dispatched to the area from around Japan, and Shinzo Abe, prime minister, said more would be sent if needed.

Rescuers were concentrating their searches in Mashiki, near the epicentre of the quake where eight of the nine deaths occurred. Stronger Japan Earthquake Triggers Landslides and Collapses Homes. Police officers investigate a house collapsed by an earthquake in Mashiki, Kumamoto prefecture, southern Japan on April 16, 2016. 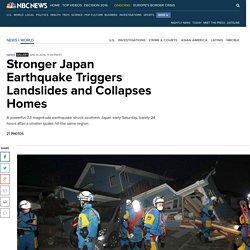 Kumamoto bridge shakes as second earthquake hits Japan – video. Japan earthquake: thousands flee amid concerns over volcanoes and aftershocks. Tens of thousands of people have been evacuated from earthquake-hit southern Japan as dozens of aftershocks struck and officials monitored nearby volcanoes for signs of activity. 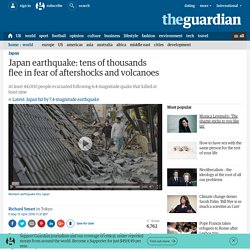 A total of 44,000 people were evacuated late on Thursday in the town of Mashiki after a magnitude-6.4 earthquake collapsed buildings and damaged other infrastructure. Nine people have been confirmed dead, ranging in age from 29 to 94. A further eight are in serious condition, and more than 850 were injured. The Japan Meteorological Agency (JMA) has warned there are likely to be strong aftershocks for the next week and advised people to stay away from any buildings that look unstable.

There are also concerns about volcanic activity in the wake of the quake. Rescuers dramatically pulled an eight-month old baby girl from a collapsed house in Mashiki early on Friday. The girl whose name has not been released, reportedly did not suffer any injuries. Earthquake on Kyushu island, Japan – in pictures. In pictures: Japan earthquake. Japan earthquake: Death toll rises after second Japan quake.

BBC World Service - Weekend, Japan Earthquake. Japan earthquake: CCTV footage shows shaking. Japan hit by second powerful earthquake with fears of worse ahead. A second major earthquake in less than two days has shaken Japan’s southern island of Kyushu, with at least 34 people thought to have been killed, about 1,500 injured and more feared buried after building collapses and landslides. 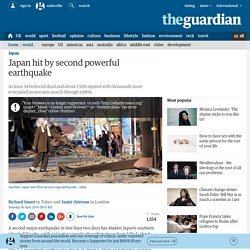 The 7.3 magnitude earthquake struck at about 1.30am on Saturday, waking people across the island – including the thousands already in crisis centres. It caused widespread damage, with several landslides and a village evacuated over fears a dam might burst. On Thursday a magnitude 6.5 earthquake in the same region of Kumamoto brought down buildings, killed nine people and injured about 800. More than 100 aftershocks followed until the bigger quake on Saturday morning, which led to the earlier, smaller event being reclassified as a foreshock. Japan’s prime minister, Shinzō Abe, expressed concern about secondary disasters from mudslides as the weather forecast for the area predicted wet weather and strong winds. “We need food and we need water. The moment an earthquake strikes Japan. Japan earthquake: Aerial footage shows devastation. Japan earthquake: Survivors rescued from rubble. Japan earthquake: Powerful new tremor in Kumamoto.

A more powerful earthquake has rocked the southern Japanese city of Kumamoto in the middle of the night, a day after an earlier tremor killed nine people. 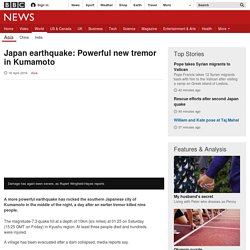 The magnitude-7.3 quake hit at a depth of 10km (six miles) at 01:25 on Saturday (15:25 GMT on Friday) in Kyushu region. At least three people died and hundreds were injured. A village has been evacuated after a dam collapsed, media reports say. A tsunami warning was issued, and lifted some 50 minutes later. Japan is regularly hit by earthquakes but stringent building codes mean that they rarely cause significant damage. This new earthquake in Kyushu was much bigger and hit a wider area than the one that struck Kumamoto on Thursday night, says the BBC's Rupert Wingfield-Hayes in Tokyo. In one town near the coast, the city hall has been so badly damaged there are fears it could collapse. 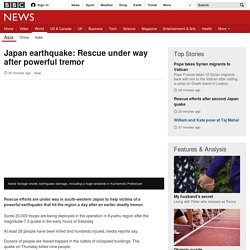 Some 20,000 troops are being deployed in the operation in Kyushu region after the magnitude-7.3 quake in the early hours of Saturday. At least 28 people have been killed and hundreds injured, media reports say. Dozens of people are feared trapped in the rubble of collapsed buildings. The quake on Thursday killed nine people. Japan earthquake: People sleep in cars for safety. BBC World Service - The Newsroom, New Earthquake Rocks Southern Japan. Rescue underway after second Japan earthquake in two days - CBBC Newsround. Earthquake topples buildings in southern Japan. Baby rescued from rubble after Japan earthquake.