Human Side Of Refugee Crisis In Moving Photos » Hope 103.2. The human side of the Middle Eastern refugee crisis has been powerfully captured by a photographer on a ferry boat to Greece. 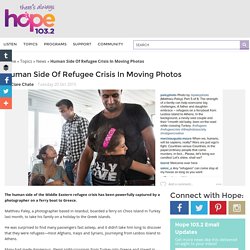 Matthieu Paley, a photographer based in Istanbul, boarded a ferry on Chios Island in Turkey last month, to take his family on a holiday to the Greek Islands. He was surprised to find many passengers fast asleep, and it didn’t take him long to discover that they were refugees—most Afghans, Iraqis and Syrians, journeying from Lesbos Island to Athens. Many had made dangerous, illegal night-crossings from Turkey into Greece and stayed in camps on Lesbos Island, before paying their fares and boarding the enormous ferry to Athens.

Hope 103.2 is proudly supported by During the ferry ride Matthieu talked to the refugees and photographed them in heart-warming, everyday human scenarios: sleeping, hugging, charging phones, making calls. He posted a series of the images on Instagram with moving captions. “The strength of a family can help overcome big challenges,” one photo says. Roads to Refuge - Further reading on issues refugees face. AMES Australia – settlement, education, training and employment services for refugees & migrants. Support for Refugee Students. ​Students from refugee backgrounds in schools, especially those with disrupted or no previous schooling, require additional support to develop the English language and learning skills they need to succeed in Australian schools. 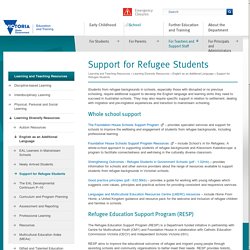 They may also require specific support in relation to settlement, dealing with migration and pre-migration experiences and transition to mainstream schooling. Whole school support The Foundation House Schools Support Program – provides specialist services and support for schools to improve the wellbeing and engagement of students from refugee backgrounds, including professional learning. Foundation House Schools Support Program Resources – include School’s In for Refugees; A whole-school approach to supporting students of refugee backgrounds and Klassroom Kaleidoscope: a program to facilitate connectedness and well-being in the culturally diverse classroom. 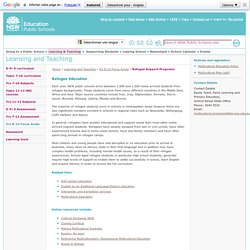 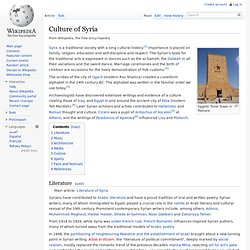 The Syrian's taste for the traditional arts is expressed in dances such as the al-Samah, the Dabkeh in all their variations and the sword dance. Marriage ceremonies and the birth of children are occasions for the lively demonstration of folk customs.[2] Music of Syria. "Syrian music" redirects here. 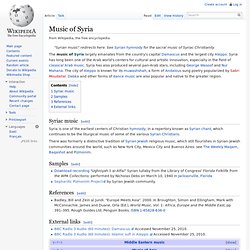 See Syrian hymnody for the sacral music of Syriac Christianity. The music of Syria largely emanates from the country's capital Damascus and the largest city Aleppo. Syria has long been one of the Arab world's centers for cultural and artistic innovation, especially in the field of classical Arab music. Syria has also produced several pan-Arab stars, including George Wasoof and Nur Mahana. The city of Aleppo is known for its muwashshah, a form of Andalous sung poetry popularized by Sabri Moudallal. Syriac music[edit] Syria is one of the earliest centers of Christian hymnody, in a repertory known as Syrian chant, which continues to be the liturgical music of some of the various Syrian Christians.

Culture. Popular culture. Arts. Health benefits of music. Written by Adam Ramsay, health journalist Music has a special power to move us and stir our emotions. 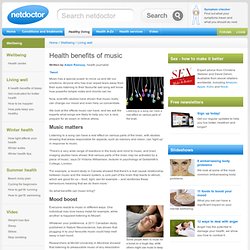 Anyone who has ever wiped tears away from their eyes listening to their favourite sad song will know how powerful simple notes and chords can be. Now, scientific studies have shown that music really can change our mood and even help us concentrate. We look at the effects music can have, and we ask the experts what songs are likely to help you run a race, prepare for an exam or relieve stress. Music Therapy. Other common name(s): none Scientific/medical name(s): none Music therapy is the use of music by health care professionals to promote healing and enhance quality of life for their patients. 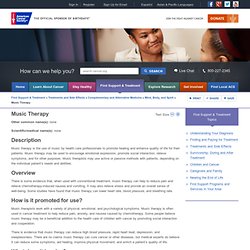 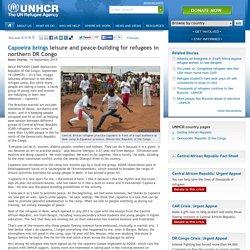 MOLE REFUGEE CAMP, Democratic Republic of the Congo, September 19 (UNHCR) – It's a hot, muggy Saturday afternoon in the Mole refugee camp, but while many people are taking a siesta, a hardy group of young men and women are indulging in their new obsession – capoeira. Capoeira for Refugees update. The Arabic Student: Top 15 Arabic Songs for Americans. To western ears Arabic music sounds at first, well, foreign. 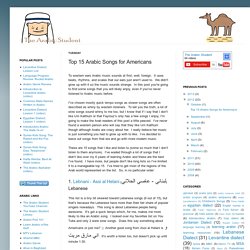 It uses beats, rhythms, and scales that our ears just aren't used to. We didn't grow up with it so the music sounds strange. In this post you're going to find some songs that you will likely enjoy, even if you've never listened to Arabic music before. I've chosen mostly quick tempo songs as slower songs are often described as whiny by western listeners. To tell you the truth, a lot of slow songs sound whiny to me too, but I know that if I say that I don't like Um Kalthum or that Fayrouz's only has a few songs I enjoy, I'm going to make the Arab readers of this post a little peeved.

'ACA' Dance Program. Download Human rights in the school classroom. Tackling racism in Australia is a unit of work that encourages students to think about diversity, particularly in relation to people, groups and their cultures, to affirm and celebrate difference and to use their understanding of diversity to act with respect, empathy and trust. 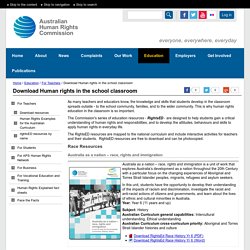 In this unit, students explore the impact of discrimination and harassment on individuals, their family and friends and the wider community. Students learn to identify racial discrimination, racial harassment and racial vilification as unlawful acts, which undermine safe, respectful environments for all. Centre For Multicultural Youth. This knowledge Hub represents the wealth of information collected over more than two decades of working with young people from refugee and migrant backgrounds. It is primarily aimed at workers and organisations looking for information about working with young people and the issues they face. You cans earch for relevant information using the advanced search filters: By Tag – each page or document is tagged with key words that will appear in a search.

Refugee awareness - Teaching ideas. Refugee settlement: repatriation - local integration - resettlement. The UNHCR and international community work together creating durable solutions so that refugees and internally displaced persons can live with safety and dignity. There are three main options for refugees that the international community is able to assist with: “Protection needs do not disappear when people repatriate. On the contrary, they tend to resurface in more complex forms in the country of origin.” Statement by the High Commissioner, UNHCR. Refugee awareness - Teaching ideas. Startts - Hints for Healing. In our last edition, we explored the concept of resilience among refugee children and adolescents.

In that issue we looked at strategies that are protective but which focused largely at the individual or non-collective level. This time, I thought it would be helpful to consider resilience from the point of view of the two most influential social systems for young people: home and school. How can we help to strengthen the healing potential of the family and of the school communities? In keeping with this theme, our case study this month is about a group intervention, showing how this way of working can offer an important emotional resource in the recovery process. Supporting communities to buffer the pain and loss caused by refugee trauma is not easy. Capoeria Angola Groups. Supporting refugee education. In general, refugee students have greater educational and support needs than most other newly arrived migrant students. Most refugee children and young people have had disrupted or no education prior to arrival in Australia.

Many have no literacy skills in their first language and in addition may have complex health problems, including mental health issues as a result of their experiences. Schools. Learning World: Education for Displaced Children. Part 1 - Syria's Scattered Classrooms, Syria Syrian Refugees in Jordan - Nearly 28 million children live in conflict zones around the world. Making a difference in refugees' lives through education. News Stories, 5 October 2015. Migrants, Refugees and Internally Displaced Persons. For teachers - Refugee Council of Australia.

'[This] book explores the ways in which the combined activities of thinking with others about written stories, exploring feelings, ideas and memories that emerge and then writing on the themes explored, can help young people to process both destructive and nourishing experiences... The Challenge of Education. WorkingwithYoungPeoplewhoareRefugees. What is the education Capital? Asylum seeker intake explained: Who will come to Australia under the Government's plan? Updated The Federal Government has announced it will accept 12,000 extra refugees affected by conflict in Syria and Iraq. Ten things you didn’t know about refugees. Syrian children pull water bottles at the Bab Al-Salam refugee camp in Azaz, near the Syrian-Turkish border, on June 9, 2013.

REUTERS/Hamid Khatib. Migrants, Immigrants or Refugees? Debunking Dehumanizing Propaganda. Refugees in Australia - Lesson 1: Supporting refugees. Inside The Syrian Refugee Camp The Size Of A Small City. Malala Yousafzai tells Syrian refugee Mazoun's story. Refugee life through a child’s eyes: Young Syrians capture the laughter and heartbreak of living in a refugee camp in photos they took themselves. The incredible photos have been taken by Syrian refugee children forced to leave their country in on-going violenceChildren were given cameras by world-renowned photographer Reza Nomade as part of his Exile Voices projectThey captured life inside Kawergosk refugee camp in Erbil, northern Iraq, home to more than 10,000 Syrian refugeesBeautiful images show the children laughing, washing and playing with their toys despite their dire struggles Among the rubble is the heartbreaking picture of some frozen shoes belonging to a young girl who wanted to go to photography class - but waited until her shoes had thawed.

Q&A: Geoffrey Robertson on Australia’s response to Syrian refugee crisis. Has the tide turned on how we treat asylum seekers? Not quite - The Drum. Zaatari Syrian refugee camp fertile ground for small businesses.