Sperm-RNA-Marks-Male-Fertility.html?utm_source=dlvr. Researchers-Report-First-Mechanism-Compound.html?utm_source=dlvr. Discovery of the first molecular mechanism of action for a small molecule that improves RNA splicing in cells could lead to new therapeutics for the genetic disorder spinal muscular atrophy (SMA) and perhaps other conditions involving improper RNA processing. 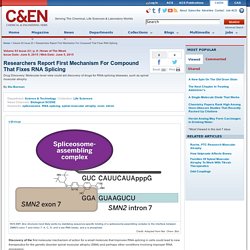 After cells transcribe genomic DNA into RNA, an RNA-protein complex called the spliceosome removes noncoding sequences, or introns, from RNA transcripts, enabling the coding sequences, or exons, to be translated into functional proteins. Currently, no approved drugs are specifically designed to address errors in RNA splicing. SMA is the leading genetic cause of infant mortality, with more than half of patients dying before age two. It is caused by the absence of the gene SMN1, which encodes SMN, a protein that protects motor neurons. There is a duplicate gene called SMN2, but it cannot fully make up for the resulting SMN deficiency because its RNA transcript is often spliced incorrectly.

Susanne E. Adrian R. New-Insecticidal-Strategy-Kills-Crop.html?utm_source=dlvr. The Colorado potato beetle costs the agricultural industry billions of dollars per year and devours so many crops around the world that the insect has been branded an “international super pest.” 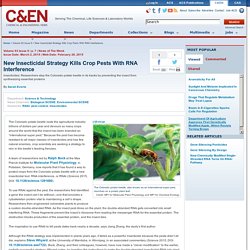 Because the pest has become resistant to all major classes of insecticides and has few natural enemies, crop scientists are seeking a strategy to rein in the beetle’s feeding frenzies. A team of researchers led by Ralph Bock at the Max Planck Institute for Molecular Plant Physiology, in Potsdam, Germany, now reports that it has found a way to protect crops from the Colorado potato beetle with a new insecticidal tool: RNA interference, or RNAi (Science 2015, DOI: 10.1126/science.1261680). To use RNAi against the pest, the researchers first identified a gene the insect can’t do without—one that encodes a cytoskeleton protein vital to maintaining a cell’s shape. Login. Insights into Domain–Domain Motions in Proteins and RNA from Solution NMR - Accounts of Chemical Research. Design, Synthesis, and Structure–Activity Relationships of Pyridoquinazolinecarboxamides as RNA Polymerase I Inhibitors - Journal of Medicinal Chemistry. Self-Assembling-Nanoparticles-Sneak-Antisense.html?utm_source=dlvr.

Since the 1980s, researchers have pursued antisense nucleic acids as a way to reduce the expression of disease-causing genes. 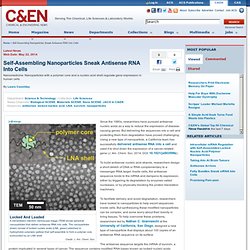 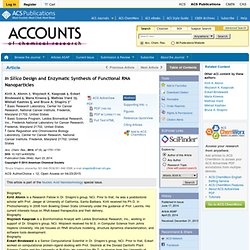 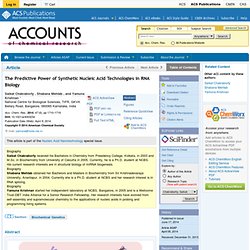 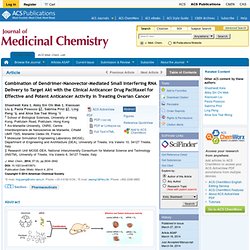 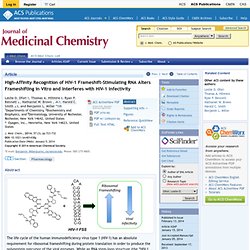 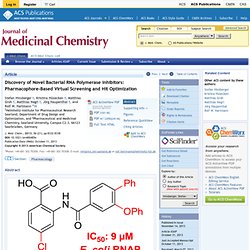 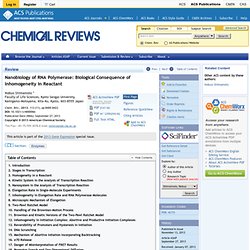 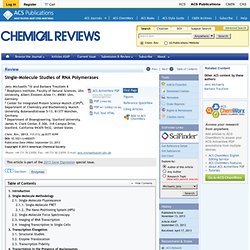 Small interfering RNAs, or siRNAs, derail expression of specific genes in cells by binding to other RNA molecules that contain the code for those genes. Biologists have developed siRNAs that target disease-related genes. But for these siRNAs to reach the clinic, researchers must find a way to deliver the molecules safely to the right cells. Other groups have tackled this delivery challenge by attaching siRNAs to chemical carriers that protect the oligonucleotides as they travel through the bloodstream. Login. Login. Stacked RNA Base Analogs Could Be A Clue To Life’s Beginnings. Detecting RNA Based On Color. Login. October 15, 2012 Issue - Vol. 90 Issue 42. RNA G-Quadruplex Tagged Selectively. Login. Login. Probe Detects Single Copy Of Viral RNA.

Supersensitive Detection Of MicroRNAs. Intramolecular Free-Radical Cyclization Reactions on Pentose Sugars for the Synthesis of Carba-LNA and Carba-ENA and the Application of Their Modified Oligonucleotides as Potential RNA Targeted Therapeutics - Chemical Reviews. Login.